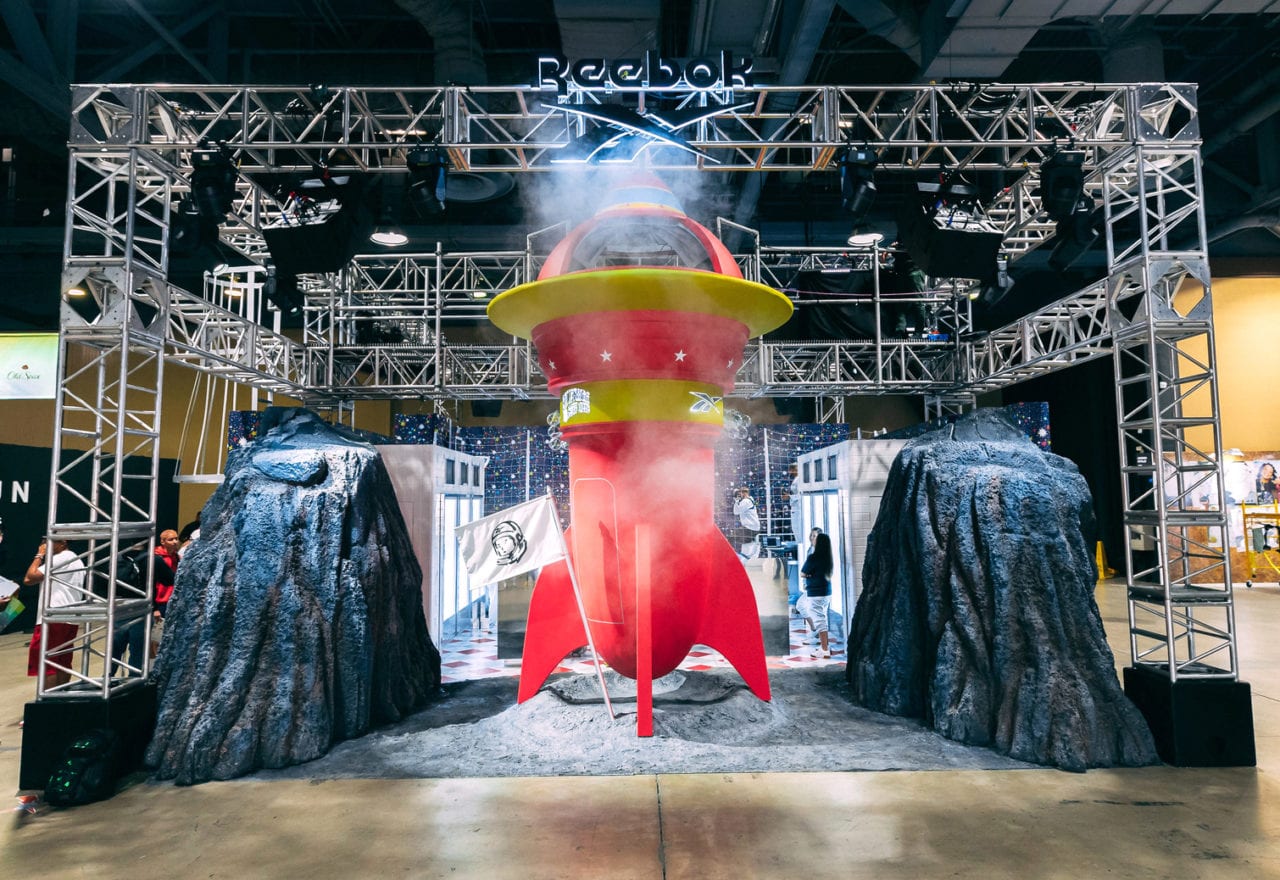 Exclusive merchandise is what draws attendees to ComplexCon Long Beach each year, so it makes sense that many sponsors design their booths to push product. But with a young demographic to engage and plenty of downtime during the convention, Reebok this year went all-in on the experiential components of its booth in addition to offering an exclusive capsule collection. In collaboration with streetwear brand Billionaire Boys Club (BBC) and its sub-brand ICECREAM, both owned by Pharrell Williams, Reebok delivered a multisensory booth experience designed to make attendees feel like they had landed at an ice cream shop… on the moon.

The booth was anchored by a 19-foot-tall rocket ship, which played into Billionaire Boys Club’s astronaut logo, flanked by large replica boulders that doubled as storage units. A co-branded “moon-landing flag” planted in front of the rocket completed the visual effect. The spacecraft periodically executed a liftoff sequence featuring colored fog, sound effects and lighting, but it wasn’t all for show—the installation doubled as a dj stand where four entertainers spun tunes throughout the event (this year Nov. 2-3).

The space theme continued with futuristic-looking shoe displays designed to look like ice cream shop counters featuring zero-gravity apparel merchandising, and complete with custom red-and-white floor tiling. There, attendees could purchase four different shoe styles from the exclusive Reebok x BBC capsule, which harkened back to the two brands’ original collaboration in 2004. Fans could also purchase items from an apparel collection that included hoodies, sweatpants and t-shirts. Above the footprint, a life-sized astronaut figure, wearing a helmet with an embedded screen displaying branded content, hung from the ceiling. Other screens scattered throughout the booth, including behind all points of sale, also played custom content.

Streetwear fans could additionally test their physical prowess at Reebok’s booth thanks to a dedicated “dunk pit.” To participate, attendees got a running start, sprung off of a trampoline and dunked a basketball into a branded hoop before falling into the foam pit below. The experience was captured on a Hypno camera, providing attendees with a shareable digital takeaway. Additional engagements included appearances by Allen Iverson and MadeinTYO, a “man on the street” video in which the brand asked people around the Long Beach Convention Center to answer fun questions, and a co-branded, geo-fenced Snapchat filter created with BBC and ICECREAM featuring the same astronaut that hung over Reebok’s booth.

“Today’s culture is so fast-paced, and while the digital landscape is incredibly important not just to us, but as an industry, it’s also incredibly crowded,” says Hanna Hugel, associate manager-US integrated marketing at Reebok. “So there’s something really special about getting in front of the consumer and seeing them react to something. That’s how you really know things are working and if you’re staying relevant. If it’s ComplexCon at 9 a.m. and there’s a line of people waiting for a Reebok product, you know it’s working. And in order to really know your consumer, you have to partake in events and cultural moments like this that are truly important to them.” Agency: MATTE Projects, New York City.