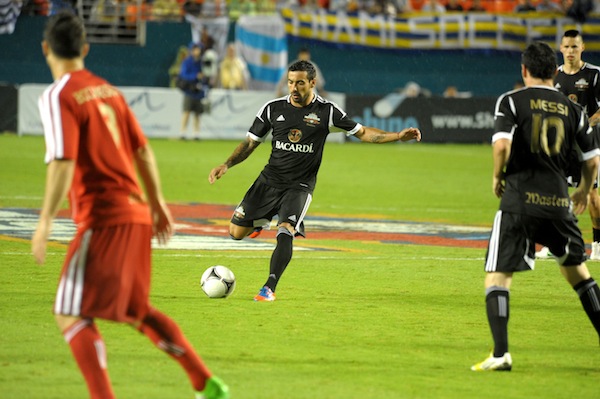 Bacardi in June sponsored the first game in the World Soccer Masters Tour, a new property that launched in Miami and gave the Miami-based rum brand a chance to connect with Hispanic soccer fans as it celebrates its 150th anniversary. The event, held June 23 at Sun Life Stadium, drew more than 48,000 fans who watched Lionel Messi, the world’s best player for three years in a row, and other top soccer players.

“We felt it was an exciting event as we celebrate our 150th anniversary year, and an opportunity for us to tell our story, that we are a family business and our roots are in Cuba, that we have shared roots and shared interests,” Christina Perez McDowell, sr. brand manager at Bacardi, told Buzz. “We love a great party and we love to be pioneers, whether creating a new way to make rum or being the first brand to bring together these great soccer players from all over the world in our backyard.”

Activities in local stores and bars helped drive awareness of the sponsorship for a month prior to the match. Bacardi Girls got the conversation going at on-premise accounts, engaging consumers in challenges, such as kicking a soccer ball into a goal, or blind taste tests, for a chance to win tickets to the game. They also trained bar staff on featured cocktails such as the Bacardi Mojito, which has been named the official cocktail of Miami, and the Bacardi Cuba Libre, another rum-inspired drink.