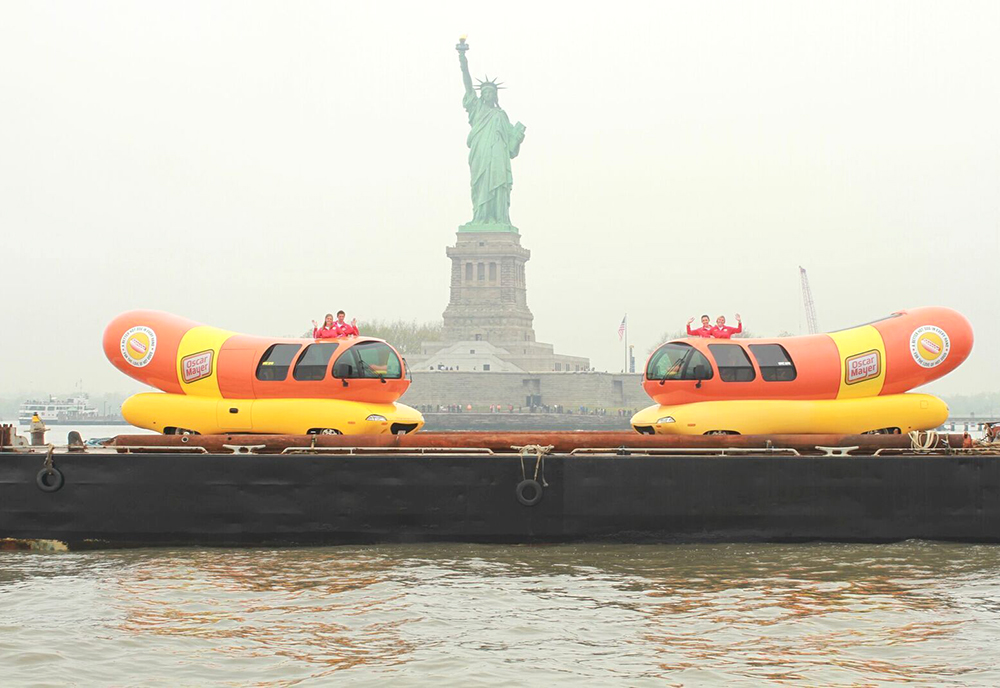 In the world of experiential, the Oscar Mayer Wienermobile is the OG.

On the road since 1936, having undergone nearly a dozen upgrades over the years, it remains an iconic, versatile and viral marketing vehicle for the hot dog, bacon and deli-meats brand. Six Wienermobiles are on the road across the country at any given time of year, and for consumers lucky enough to spot one, it’s often a once-in-a-lifetime moment—whether they like hot dogs or not.

You may be interested to learn that Oscar Mayer doesn’t sample from these vehicles; a sampling trailer accompanies them when needed. Instead, these 27-foot-long hot dogs on wheels are a big, juicy awareness play that is all about generating buzz and making consumers smile. And the special people who drive the Wienermobiles help feed that awareness.

Thirty-two years ago, Oscar Mayer created the Hotdogger program, where recent college graduates apply to be among an elite team of 12 selected to pair up and operate a Wienermobile on a one-year contract. This year, Oscar Mayer received a record-breaking number of applications: 6,000—far above and beyond the 1,000 applications that typically come in.

Clearly, the Wienermobile program has some sizzling staying power. So, we sat down with Edwin Roland, senior experiential marketing manager for Oscar Mayer at Kraft-Heinz, for tips on building and sustaining legacy programs, the value they bring to brands, how Oscar Mayer keeps the Wienermobile program fresh and, most importantly, what goes into selecting the best BAs in the biz.

It helps to have a longstanding champion of a program who has years of experience under their belt. This may also require a succession plan, developing and fostering talent so that people can rise through the ranks, continue the legacy of the program and help grow it with care.

The Wienermobile concept transcends audiences and demographics, and it can easily meet the strategic needs of new marketing messaging and campaigns. In 2017, Oscar Mayer unveiled its “Put a better hot dog in every hand” campaign, which was all about traveling the country to educate consumers on its improved hot dogs made with no nitrates, nitrites, artificial preservatives or animal byproducts.

Oscar Mayer took that new slogan to new heights by expanding its WienerFleet, announcing its new WienerCycle and WienerDrone at a Fourth of July celebration in Weiner, AK. The Wienermobile also floated into New York Harbor on a barge where it passed the Statue of Liberty and docked at Governors Island. A Wienermobile also made a trek to Whittier, AK (population: 220), traveling 1,200 miles by road and 3,000 miles by barge.

“Years ago, the Wienermobile went around and auditioned people to be in our commercials, where they would sing the jingle through our star or talent search programs, and most recently it’s about demonstrating why it’s a better hot dog,” Roland says.

The Wienermobile program has rolled into the modern experiential landscape with the Wienermobile app that allows fans to follow where the vehicle is headed, and also enjoy an augmented reality view and photo op from inside the Wienermobile using their devices at home. 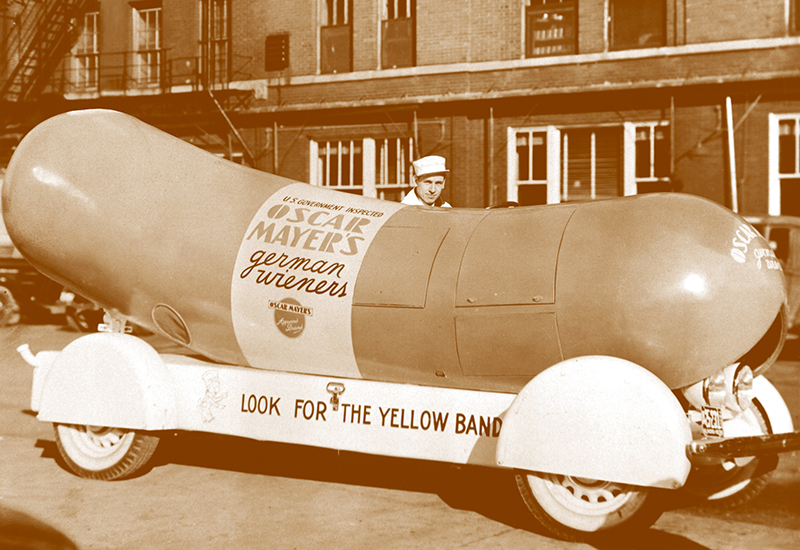 Oscar Mayer designed its first Wienermobile vehicle back in 1936.

The Hotdoggers run up to 1,500 events per year. They’re in charge of seeking out and executing all p.r. efforts as spokespeople, including pitching media and conducting on-air interviews—and promoting the Call for Applications to be a Hotdogger. As a result, they receive extensive media training (at “Hot Dog High”), and they understand the business on a “more robust and significantly deeper level” than a typical staffer.

“They have to be representing Oscar Mayer 24/7—you don’t just sneak into town on a 27-foot-long hot dog,” Roland says. “Even on their off days, when they’re at a restaurant or at the hotel, they’re representing us, so we have to have trustworthy, energetic folks that enjoy being around people, because even getting gas can turn into an event.”

This structure Oscar Mayer has created for the Hotdogger program attracts talented young people who could ultimately work for the brand or help mentor the next generation. The Hotdoggers receive a competitive salary, benefits and PTO. As stated in the application, there are only 13 people who can speak on behalf of Oscar Mayer: the 12 Hotdoggers and the ceo.

A legacy program needs alumni that serve as mentors and advisory members and, at the very least, lifelong influencers and superfans. And the Hotdogger alumni network is a strong one, consisting of doctors, lawyers and teachers, in addition to people in key roles within major marketing companies and brands.

“The alumni group is very active and we are always meeting up with members on the road, having dinners or grabbing coffee, and a lot of Hotdoggers have gone on to do some pretty prestigious jobs so it’s great to know that at the end of this I will have those connections,” says Hotdogger Ketchup Kyle Edwards.

“You can always trust a Hotdogger, and you can count on them if you need a place to stay in town or need a familiar face or someone who can relate to you,” adds Hotdogger Habanero Hayley Rozman. “I know I’ll be sad to come to the end of this job, but I’m so excited for the next group of people who get to truly relish the job as we have this year and for me to become part of that alumni and have a part in the mentorship side of it.”

Because as Kyle put it, “It’s always good to ketchup.”