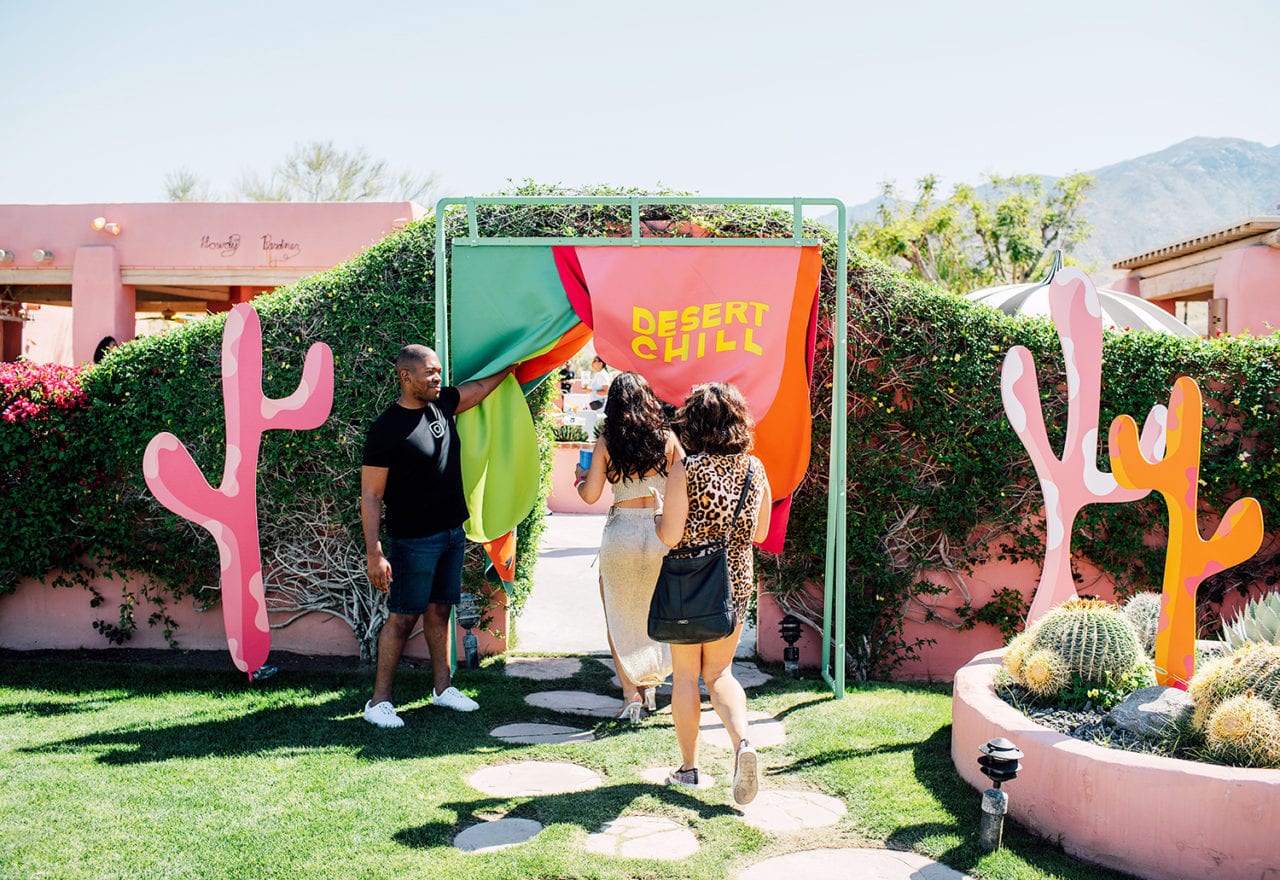 Inside Instagram’s Inspiration-rich Space for Artist Influencers at Coachella

It’s a tall order to build an Instagrammable space for some of your biggest users and influencers when you are, in fact, Instagram. But the brand delivered with, quite literally, a desert oasis 26 miles away from the epicenter of the Coachella Valley Music and Arts Festival for invited music and culture influencers.

Dubbed “Desert Chill,” it was Instagram’s first-ever branded house at the festival. The idea was to create a respite from the marketing madness, but also, to encourage the invited attendees to share in the sort of organic environment only Instagram can activate. The brand enlisted artist and Instagram influencer D’ana Nunez of COVL to co-create a neon-colored desert landscape with playful lounge seating areas, a dj station, a neon palm garden, colorful murals, a pool, a fire pit area and a scent shop for blending oils to create custom fragrances.

“Coachella is a global music event that tends to be a great lens into youth culture,” says Lauren Schutte, manager-global creative strategy at Instagram. “It’s a place we’ve been thinking about for a while, but it’s a really noisy event. There’s a lot going on and a lot of brands show up, so we wanted to be intentional about how we did it.”

Rather than focusing on product features, the activation was designed to strengthen its relationships with the music industry, from music and culture influencers to artists and talent managers to content creators. “They’re external partners who use our platform to grow their own brands, and we’re here to help them do that,” Schutte says. “They’re going to be at Coachella, they’re going to be sharing. Coachella feels like Instagram everywhere, so Instagram should probably actually be there.”

The space was, of course, Instagrammable. (Can you say, meta?) And tackling the unique challenge of creating a space that’s worthy of your own platform is one the partnership team at Instagram must weigh heavily, particularly at an event like Coachella, where attendees and influencers earn clout for posting while at the festival (or even faking it, as one influencer did this year).

“We have to evolve on that all the time, especially in a place like Coachella, which basically feels like Instagram come to life—the people, the atmosphere, all of it,” says Schutte.

Since content creation is the brand’s specialty, how Instagram encourages attendees to share is different for every event. One recent tactic at the Golden Globes, a tentpole event for Instagram’s music partnership crew, involved building content creation spaces every couple of steps at the event. In contrast, the Coachella activation focused more on community, inspiration and chill time.

“We wanted it to be about feeling safe to be yourself, as opposed to arriving and having to do Stories in this room, a feed thing there, and then an IGTV booth. That felt too heavy. It was called ‘Desert Chill’ for a reason. We wanted it to be less frenetic and not have it feel like a job,” Schutte says.

The brand still hoped that the influencers would post on the platform (spoiler alert: they did), so the space included plenty of photo-worthy scenery. The event’s hashtag, #IGxDesertChill, produced nearly 3,000 mentions, approximately five times the number of attendees. Agency: Manifold, Portland, OR.

Step Inside the Desert Chill Experience: