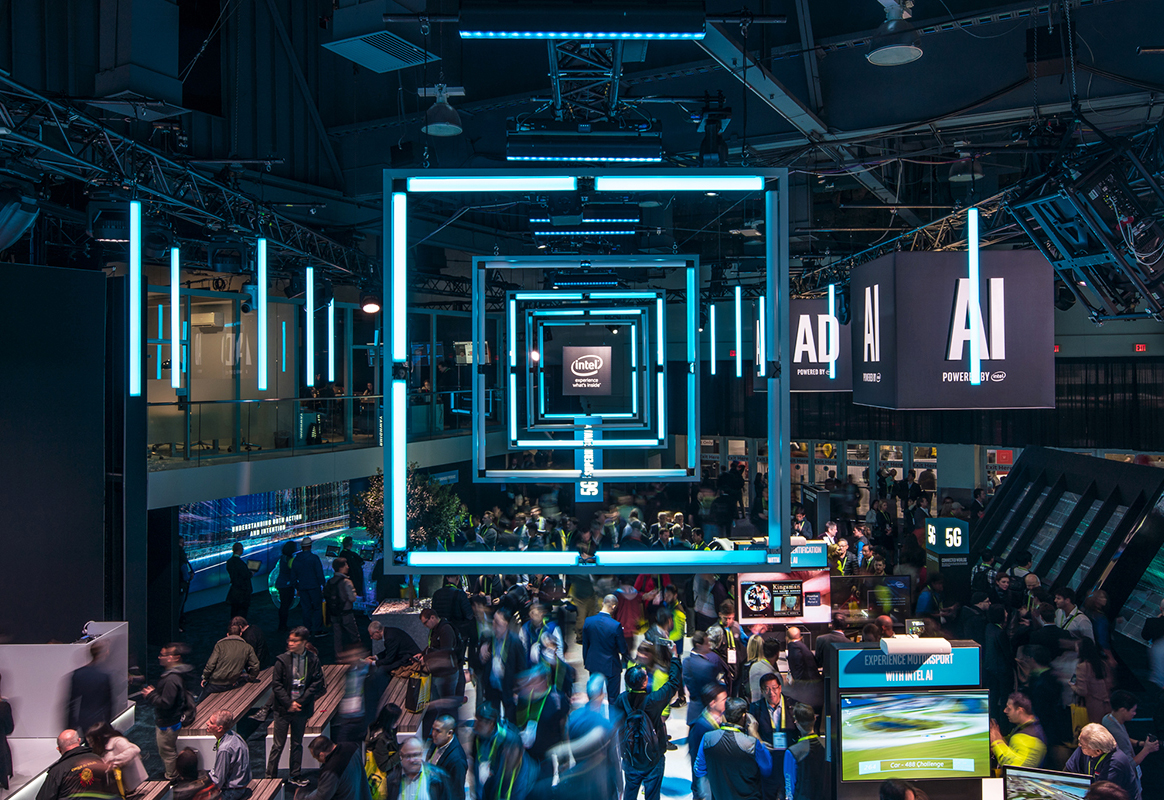 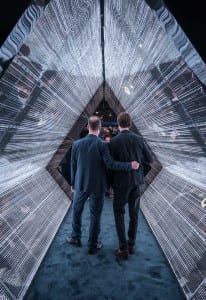 The 5G Connected Worlds tunnel depicted how 5G will impact daily life for the better.

Intel is known for its signature design focal points within its booth space at CES. One year it was the interactive Ultrabook Tree, another year, looming human figures in movement. This year, it was the “5G Super Highway,” 160 feet of LED tubing hanging overhead that spanned the length of the footprint. Intersecting it, an 80-foot catwalk that offered a commanding perspective of the space and a straight-on view through the “highway.”

The feature helped illustrate Intel’s CES 2018 booth theme of “Experience the Power of Data” that brought to life the four themes of Intel CEO Brian Krzanich’s opening keynote at the show, which took place Jan. 9-12 in Las Vegas. Those themes, organized into zones within the space, included Artificial Intelligence, 5G, Autonomous Driving and Virtual Reality.

“We wanted the exhibit to align with this new direction, this new transformation for Intel from a PC company to a data company, a company that is focused on processing, distributing and analyzing data. People got it,” says Victor Torregroza, events program manager, global marketing & communications at Intel.

The 80-foot catwalk dubbed the “data walk” was used for the first two days by broadcast media, social media influencers and VIPs who were able to take in a complete look at the exhibit below and receive one-on-one explanations of key areas in the space they might want to experience further.

In one zone, Intel, a sponsor of the upcoming 2018 Winter Olympics in PyeongChang, illustrated how it will transform the spectator, fan and athlete experience at the Games. Another zone called Data Wonderland offered immersive installations designed to be shareable. Like the 5G Connected Worlds tunnel that brought to life three use cases depicting how 5G will impact day-to-day life for the better through animations and typography. When attendees entered the tunnel their presence was detected, triggering a three-act story with interactive elements all along the way, including: connected cars that instantly communicate hazards to nearby vehicles and the cloud; smart cities that leverage 5G-connected IoT solutions to quickly defuse potentially dangerous situations; and the power of latency-free virtual reality that will “transform education and help bring the people of the world closer.” 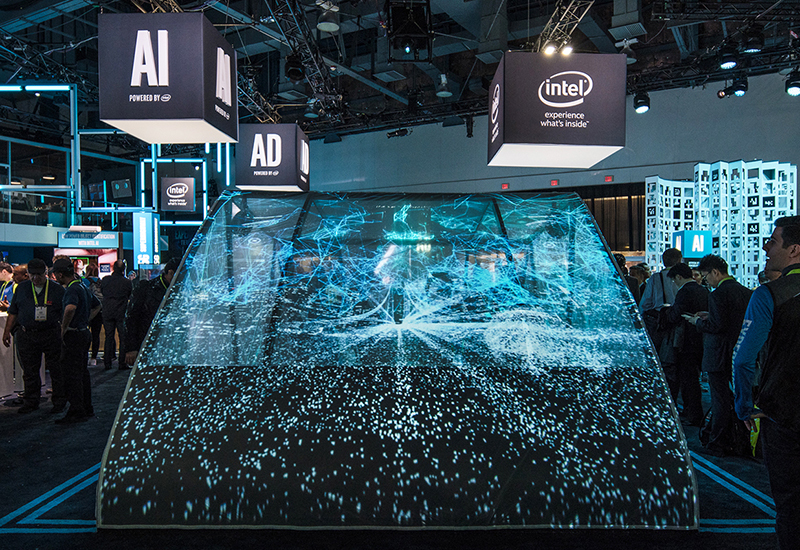 Intel’s spotlight stage in the booth offered demos, drone flights, 5G chats and other content, as well as a cultural performance. Musician, songwriter and producer HÄANA performed on the violin while two graphic artists created visuals on a large-scale screen behind her so attendees could “experience the power of data” through her live performance. This particular feature thrust Intel into the “spotlight” as moments before HÄANA was to go on stage the power went out at the Las Vegas Convention Center.

HÄANA performed anyway, illuminated by battery-charged camera equipment and audience members’ smartphones. Intel’s social media teams went to work tweeting about the blackout and capturing, editing and posting HÄANA’s performance in the dark—and then later, in the light after power was restored. All of these in-the-moment efforts led to Intel being among the top tweets at the show and trending on Twitter:

“We’re a minute into the power outage, she steps out on stage, all you hear through the halls is the beautiful piercing of her strings on the violin,” Torregroza says. “She starts performing and as part of her performance she stomps her feet, and as she’s stomping her feet to the music, attendees clap so it started to build and grew into this beautiful crescendo and then boom, the performance ended, there was all of this applause. It was the magic of humanity.”

• #CESBlackout2018: How Four Clever Brands Found a Way to Shine in the Dark
• That Lone Violin You Heard During #CESBlackout2018? It Was from Intel
• Twitter Commons Features Intimate Conversation and Cultural Relevancy