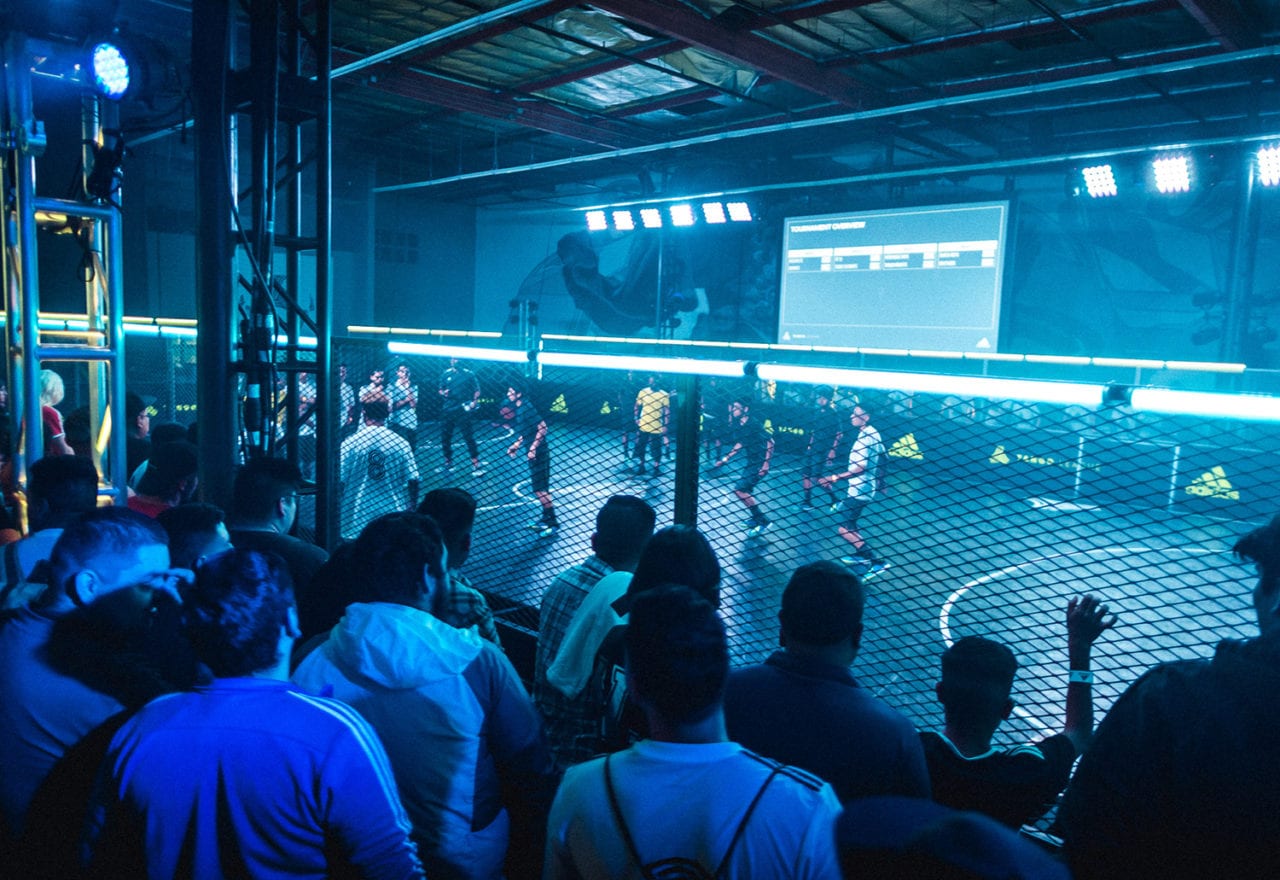 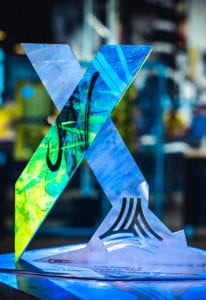 Graffiti artist Saber helped craft a sculpture that served as a trophy for the winning team.

Right at the start of World Cup fever this summer, adidas staged one of several street soccer experiences as part of the brand’s global Tango League competition series. Held at the indoor UrbanFutsal facility, The Base, in Los Angeles on June 16, the event coincided with the launch of the adidas Energy Mode X18 boot and also fueled the brand’s U.S. soccer narrative for the year.

“Our goal is to build an inclusive soccer community in our key cities of New York City and L.A.,” says Lindsey Miller, event manager at adidas U.S. Soccer. “By growing the Tango community at each event, we are able to have more meaningful touchpoints with these target consumers who are the ones who will help authenticate and advocate for our brand.”

Different from the 11-a-side play format that U.S. soccer fans are accustomed to, 5-a-side street-style soccer (also known as futsal) is more focused on creativity in the game. Players in the Tango League are duly rewarded for demonstrating as much. The challenge for adidas is igniting passion for this type of soccer within the U.S.

“Tango League presents a specific type of soccer that isn’t as popular in the U.S. as it is globally. We’re challenged with trying to popularize a layer of the sport that isn’t a piece of our culture,” Miller says. “But we bring in the local culture and community and build off of that to excite around Tango League and to get players to join.”

Here’s how it comes together: Players for each Tango League event (ages 16-35 can qualify) are chosen on social media, from adidas brand channels and soccer influencer channels, via a call to action to sign up. Players can also apply using the Tango League app. The brand then selects the teams that will be invited to the events, but the teams that don’t make the cut are still invited to be spectators and engage with the brand on-site.

Aside from helping to choose Tango League players, influencers serve as guest judges by picking an MVP after each match as well as the overall MVP of the tournament, who then becomes an adidas representative, gaining access to products and special experiences such as box seats to NFL games and meet-and-greets with adidas athletes. The MVPs of individual tournaments are also invited to represent their cities in one of Tango League’s global events. And finally, MVPs can be named to a small group of the elite Tango League players, Tango Squad FC, who travel the world to train and play against, and with, some of adidas’ biggest teams and assets, such as Manchester United and Bayern Munich.

“It creates a really amazing opportunity for these young players to be seen on an international level and grow their fame,” Miller says. 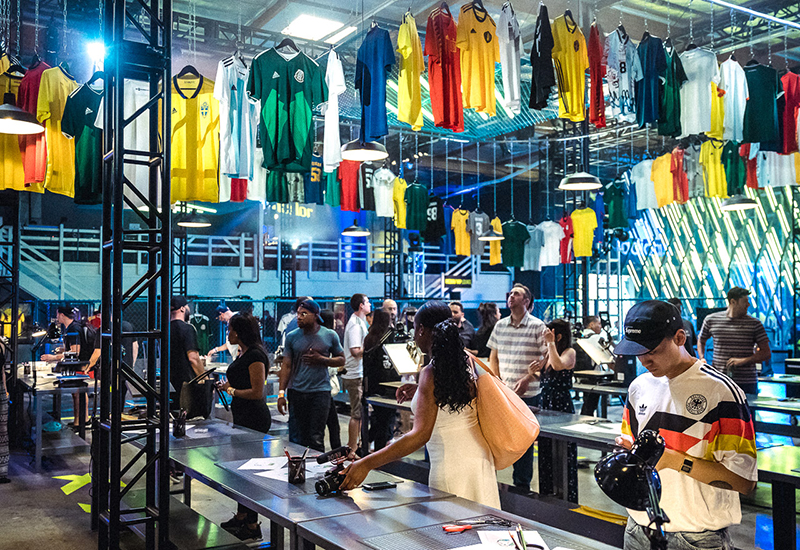 Activations included a Maker Lab, where customized jerseys were created for attendees.

But back to the Tango League tournament event itself. The L.A. event offered touchpoints surrounding art, music, fashion and sports. Inside the venue, eight Xs (a nod to the new adidas X18 boot) were suspended from the ceiling and equipped with sound-responsive lights. A pair of X18 boots was suspended as well, and neon green letters that spelled the phrase “UNLEASH SPEED” were stenciled onto the floor.

Activations included a Maker Lab, where customized jerseys were created for attendees. The jerseys were a mashup of one of eight federation tees—each on display outside the Lab with photos of iconic street pitches (soccer field surfaces) from each country—and a piece of fabric created by L.A. graffiti artist Saber. The jersey/fabric combo was then fused together by seamstresses on-site. Consumers could choose from an array of colors, letters, numbers, fonts and World Cup country patches. Saber also live-painted a wall of soccer balls, which were then offered to top players, influencers, VIP, media and a few fans to take home. He also added the final artistic touches to a steel X sculpture that served as the trophy for the winning team.

Consumers could also take part in a Marcelo Vieira augmented reality experience, where they were challenged to demonstrate their freestyle skills and be judged by Marcelo (a player for Madrid) whose likeness appeared on a large, interactive screen. Behind the scenes, a brand ambassador controlled how Marcelo would react on-screen. In the event’s lounge area, consumers enjoyed fried chicken sandwiches from L.A. hotspot Sweet Chick and pub drinks while watching a live stream of the Tango League games.

Rounding out the touchpoints was a retail pop-up shop from L.A.-based Niky’s Sports, and a performance post-tournament from rapper Rich the Kid. And at the end of the event the crowd exited the venue to see motorcyclists perform a trick show. One superbike gave the tournament MVP a ride into the city, representing his journey to the next stop along the global Tango League tour. Agency: Match Marketing Group, Boulder, CO.

See How adidas Tango League Took Soccer to the ‘Streets’: