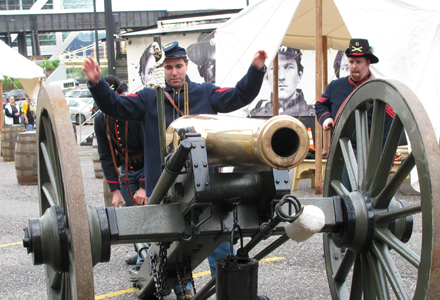 For the 150th anniversary of the start of the Civil War, the Pennsylvania Historical Society chose a mobile exhibit to showcase the commonwealth’s involvement in the Civil War with a focus on African-Americans’ contributions and visits to local historical sites. The Pennsylvania Civil War 150 Road Show has been traveling in an expandable 53-foot tractor-trailer since April and plans to hit 67 counties throughout the state. The tour is teaming up with local historical societies, who volunteer their time to help staff the event and provide Civil War reenactors’ performances as an add-on to the exhibit.

Inside the vehicle visitors can go through six interactive stations, including a video booth to share Civil War-related stories that are uploaded to pacivilwar150.com in real-time. At another station they can use a touch screen camera to take their photo, which is transformed into a vintage-style photo resembling what the shot might look like during the Civil War era. It’s emailed to visitors and also posted on the website. At each station there is music playing, with the focus for example, on bugles or the thumps of horses’ hooves. If visitors step away from the station and stand in the center of the space those individual sounds meld into one soundtrack. There are also plasma screens with a narrated overview of the ways in which Pennsylvania was in involved in the war.

“We want to raise people’s interest in both Pennsylvania history and the history of the Civil War, as well as shine light on small and medium historical organizations and heighten the economic impact of heritage tourism on the commonwealth of Pennsylvania,” John Seitter, project manager for PA Civil War 150, told Buzz. Agency: The Borden Agency, Huntingdon Valley, PA.