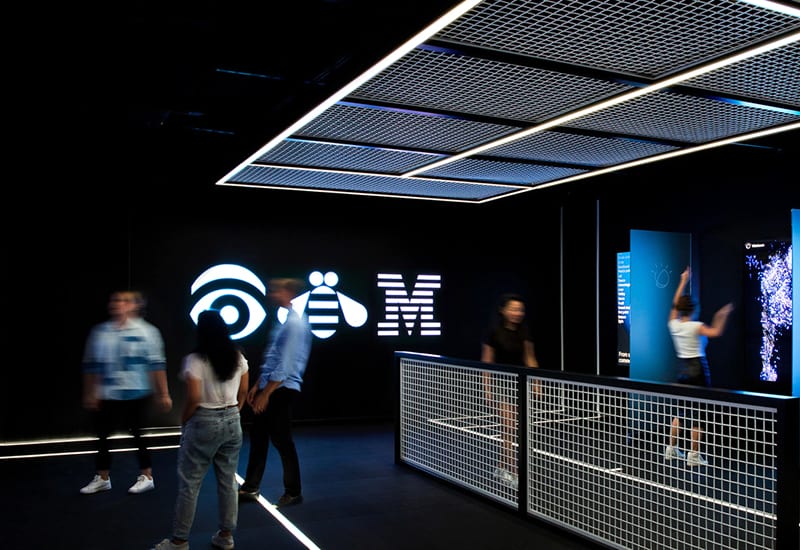 Professional sports and technology were always destined to be partners in crime. Sports fans have long embraced the time-honored tradition of tracking statistics on every player, team and matchup, and modern technology solutions are delivering that data to fans faster and more efficiently than ever before. And as today’s sports buffs demand more engaging experiences, both on and off of the field, technology ranging from artificial intelligence to cloud computing is fueling the interactive, in-stadium touchpoints they’ve come to expect. This evolution of sports fandom can, in part, be attributed to the growing number of sports properties teaming up with progressive data brands to enhance the live fan experience, and adapt to their audiences’ shifting behaviors. Here, we examine three of those partnerships. 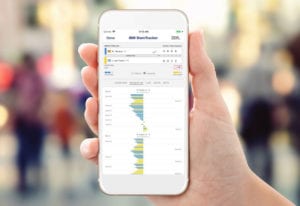 IBM has served as the official technology partner of the US Open since 1990, providing scores and stats to tennis fans all across the world. In 2018, the brand upgraded its tournament presence with a host of new tech-fueled elements that enhanced the fan experience and introduced attendees to the IBM technology that powers the operational and digital components of the tournament (George P. Johnson, Auburn Hills, MI, handled).

Among enhancements was the debut of an AI chatbot powered by IBM Watson on the official US Open mobile app. Before attendees arrived at the tournament, they could leverage the chatbot to find out what time the gates opened, for instance, or if water bottles were permitted. On-site, the chatbot helped fans navigate schedules, transportation, directions and dining options.

The brand also served up the IBM SlamTracker, a data analytics application that gave fans exclusive access to real-time dashboards of all matches in progress on their phones and on screens across the tournament, and delivered insights from 12 years of data that included 6,350 matches and 946,759 points. The app helped fans understand each player’s strengths, tracked their progress against performance metrics, and illustrated how two competitors would match up ahead of the competition thanks to built-in predictive analytics that identified key strategies for each player.

The crowning jewel, the IBM Fan Experience, was an interactive activation designed to help attendees of all ages explore the fusion of tennis and technology, and better grasp what IBM does as a company. Participants could test Watson’s artificial intelligence capabilities and learn how the same technology is used to address complex world issues, from identifying problems with trains to diagnosing and treating cancer. 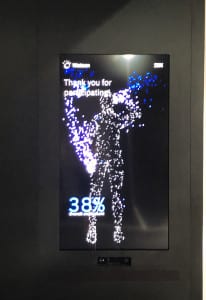 Tennis fans participated in a Watson-fueled “AI Highlights” experience at the US Open.

On one side of the experience, fans interacted with the Data Visualizer, a larger-than-life touch screen that showcased how IBM has tracked over a decade of real-time stats from every USTA match, and how its technology generates valuable insights from a mountain of data. On the other side, fans participated in a Watson-fueled “AI Highlights” engagement. During the experience, attendees stepped in front of one of three screens and, with the help of a brand ambassador, tested Watson’s ability to recognize the sights and sounds of various sports while creating their own shareable AI Highlight in the process. Fans could also experience IBM’s language recognition technology by calling their own plays over footage of a classic US Open moment, as Watson gauged the tone and excitement levels of the crowd. The experience ultimately created an excitement score for each fan, developed using the same metrics IBM leverages to gauge crowd enthusiasm during live matches.

“I think the intersection of sports and technology is inevitable. Ten years ago, the type of sports content that was available out there was probably 20 percent of what it is today, and almost entirely due to digital distribution and being able to essentially watch any sport you want if you have the right platform,” says Noah Syken, vp-sports & entertainment partnerships at IBM. “So that’s one piece of it. But I think all companies, whether they’re tech or not, are looking for insights into the folks that they want to communicate and have a relationship with. And we’re all looking for how do we establish and build a relationship when people’s walls are down a little bit. How do we tap into the passion of what people love and then how do we translate what they love into, hopefully, a relationship when they’re making a purchase decision, whether that’s paper towels or technology.”

Stay tuned for IBM’s 2019 US Open fan experience, which will incorporate some of last year’s tech-powered engagements, with a few new surprises.

Minor League Baseball (MiLB) is the second most-attended sports property in the country, with more than 41 million people passing through its turnstiles each year. Just in time for the 2019 season, the league unveiled the largest digital out-of-home network offered by a sports property across 25 of its ballparks thanks to a new partnership with visual and data analytics company ISM Connect. Together on Opening Night, the organizations introduced the world’s first integrated, in-venue smart network of fan engagement technology to thousands of baseball fanatics.

ISM’s scalable smart display technology is integrated into an array of screens (six to 18 total, depending on the venue) across high-traffic areas in each participating ballpark, which will total 50 by the end of the MiLB season. The displays are designed to support teams’ efforts to better connect with their fans by offering behind-the-scenes game footage, for example, as well as to improve brand partners’ in-venue engagement with attendees through targeted marketing and custom content. The displays can also be used to help fans navigate the concourse to find the nearest concession stand, for instance, as well as to offer live feeds of the game to keep attendees up-to-date on the action when they leave their seats.

What makes the smart displays particularly useful is the small camera affixed to each of them, which offers teams and their brand partners insights into who is engaging with the content and how well it’s performing. No personal information is collected, but the MiLB and its sponsors can view basic demographic data on who interacted with the content, and how long they were engaged. What’s more, all of the screens are connected through a proprietary CMS structure on the back end, meaning if a national brand is interested in partnering with a particular team to deliver its messaging, it could just as easily partner with all of the teams by pushing its content across the entire digital network. On the other side of the coin, the opportunity to deliver hyper-local content is also available. 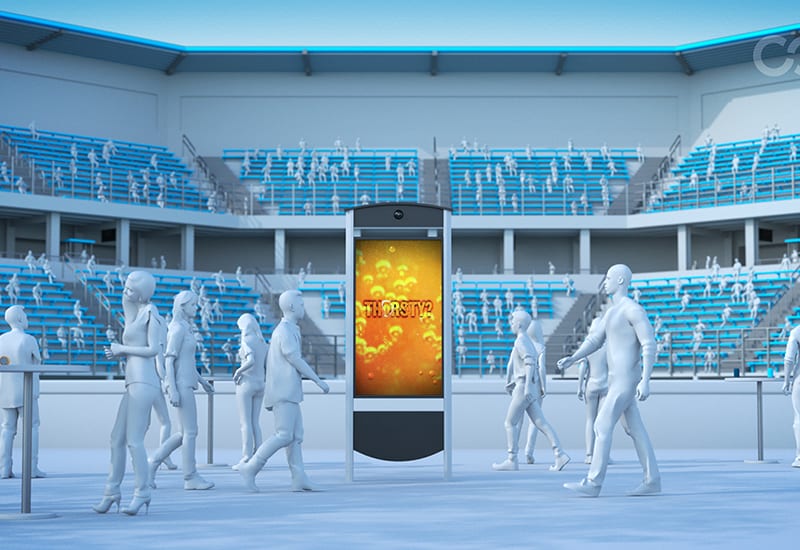 Content on Jumobtrons and touch screens is helping fans better understand the game.

“It boils down to the data,” says Meka Morris, chief revenue officer at ISM Connect. “Teams and leagues sell tickets and know relatively well who their ticket-buyers are, but tickets can be exchanged in the market and change hands along the way. When we’re talking about who’s actually in attendance at a game, we provide a platform to help [teams] tell that story, not only for the venue itself but for the sponsors that are investing their money.”

In addition to keeping fans engaged while they’re on-site at games, MiLB’s partnership with ISM Connect is helping the league drive fans to stadiums in the first place. In an era when nearly every sporting event imaginable is available for digital consumption, drawing people to the live experience has become paramount.

“The vision is to be a dynamic leader in sport and entertainment and part of that vision is to lead and to pave a new trail,” says David Wright, chief marketing and commercial officer at Minor League Baseball. “The [MiLB] environment has become an incredible social outing—a large percentage of our fans are engaging with Minor League Baseball, in some part, for reasons other than the game itself. So, this is one more really thoughtful effort to provide value to our fans above and beyond the value they’re getting by watching their favorite team. It makes total sense; it plays right into our brand and our positioning in the marketplace. And we’re really excited for what the future holds.”

How’s this for hustling: Between November of 2017 and June of 2019, Amazon Web Services (AWS) inked deals with the National Football League, Major League Baseball, NASCAR and Formula 1. Each partnership was designed to help the properties enhance their respective fan experiences via AWS’s cloud computing, machine learning and artificial intelligence solutions by driving mission-critical workloads. Through each partnership, the brand is demonstrating how its technology can help fans better understand the nuances of the sports they’re so passionate about.

One reason the properties chose to partner with AWS is the agility the brand’s cost savings provide. Because of AWS’s variable pricing, the risk of innovation is often reduced, giving sports properties the ability to create and roll out new products to fans more quickly. Take the MLB’s Statcast sports analytics product, which is powered by cameras and tracking technology installed in all 30 MLB stadiums around the country that track the location of each player and the game ball 10,000 times per second. That data is pulled into AWS’s platform, which crunches the numbers and ultimately allows the league to create insights and inferences for fans in the form of statistics to help them better understand the game.

One example is the Stolen Base Probability stat created and released during the 2018 MLB post-season, which calculates the likelihood that a runner on first base will be able to successfully steal second base, given a range of factors, like how far the runner is leading off of first base or how long it takes for the ball to leave the pitcher’s hand. AWS takes 21 of those inferences and in 128 milliseconds calculates the stolen base probability, and delivers it to fans in real time. Those metrics are also leveraged by the MLB’s broadcast partners, who integrate them into their coverage of the live game. Statcast figures are also displayed on ballpark Jumbotrons during the game, giving live attendees the opportunity to absorb the same kind of statistical insights they’d get watching a broadcast of the game at home. 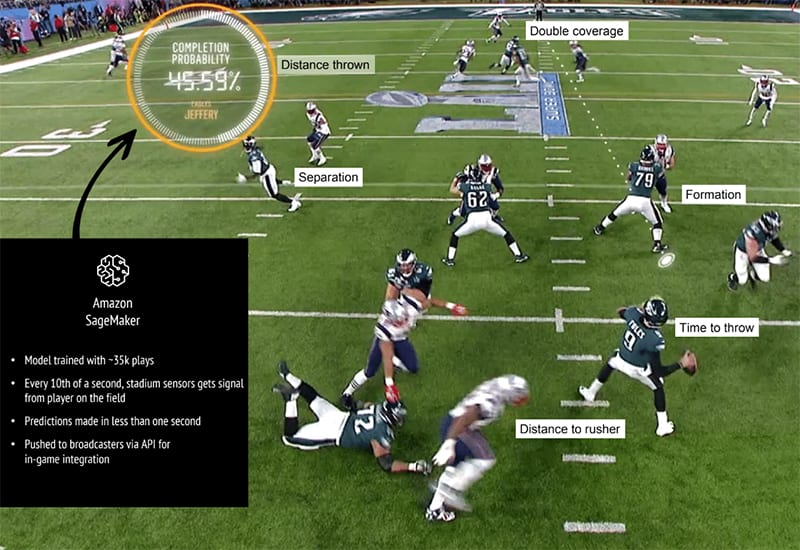 Similar to Statcast, AWS developed a Next Gen Stats product for the NFL. The product leverages RFID tags embedded into the game ball and athletes’ shoulder pads to capture the location of the ball and all of the players on the field every tenth of a second. As part of that package, AWS last year unveiled a stat called Pass Completion Probability, which uses machine learning to estimate the likelihood that a particular pass will result in a completion based on factors like how much time the quarterback has to throw, and the distance between the receiver and the defensive back. Just like the MLB, the NFL was able to integrate the stat into live broadcasts of the game, and in-venue displays.

“What we’re finding is that fans are really gravitating towards the gamification of sports, making the consumption of sports more interactive and engaging,” says Justin Burks, director-worldwide sports marketing & strategic programs at AWS. “And that might apply to someone sitting at home in front of a TV or a connected device. It might apply to someone who’s out of home at a bus stop, for example, looking at their phone. But also, increasingly, it can apply to fans that are sitting in the stadium. So, we’ve had a lot of discussions with some of our sports customers about other kinds of integrated experiences that we might be able to create for those fans… I think [our partners] are viewing this as a first step down a longer road.”