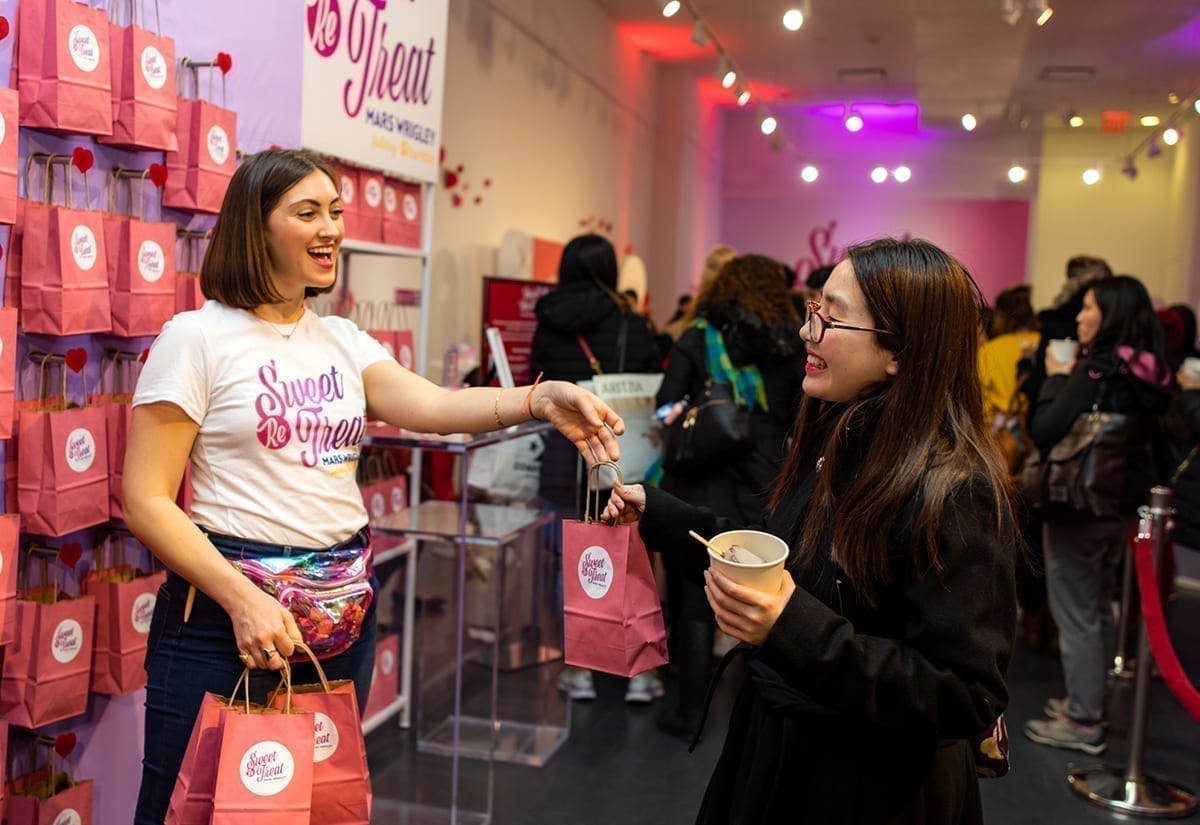 If you’re activating around Valentine’s Day this year, there’s still time to steal a few ideas that’ll give your event a little extra oomph. And we’re here to spread the love. There’s no shortage of great experiential campaigns to get the juices flowing, whether it be Snuggle’s heartfelt, interactive mosaic or Godiva’s 20-foot-tall chocolate boxes and indulgent sampling program. For a quick hit of inspiration and, naturally, chocolate, take a look at the five engagement tactics that’ll zhuzh up your Valentine’s Day activations.

From the Valentine’s Day Archives: 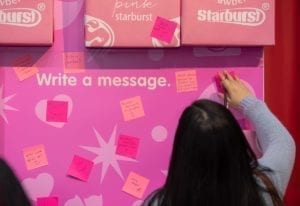 Mars invited attendees of its Sweet ReTREAT to write heartfelt messages on a Starburst-themed wall installation.

Over the years, several brands have hosted Valentine’s Day activations that, among activities, invite attendees to write heartfelt messages to loved ones. (How the notes or greeting cards are disseminated will be up to you and the overarching event strategy.) Snuggle took the approach for its #BearYourHeart Valentine’s Day campaign, during which New Yorkers could write warm sentiments to a loved one on an oversized note card, take a photo with the note in a nearby booth, then watch as the content was fed to a massive outdoor digital screen where a mosaic of the day’s photos was updated in real time. Consumers whose photos landed on a designated prize space within the mosaic won Snuggle swag. Snuggle also took the digital route to supplement its in-person SnugMobile program. A brand microsite offered consumers an opportunity to send a love letter to someone special by creating a customized video card from its warm and fuzzy mascot, Snuggle Bear. (Agencies: Inspira Marketing Group; AXLE Brand.)

Mars has also implemented the strategy. For its combined Valentine’s Day/Galentine’s Day pop-up in 2020, the confectionary brand built a pink Starburst wall installation where attendees were invited to write messages of encouragement or inspiration on pink sticky notes and attach them to the board.

The warm and fuzzies aren’t for everyone, particularly if someone has just experienced a breakup. It seems to be an untapped audience that more brands could appeal to around Valentine’s Day with a bit of humor and irreverence. Burger King is one brand that seized the opportunity with its anti-Valentine’s Day campaign, which aligned with the release of the film “Birds of Prey,” about a lead character who has been dumped. Leaning on that theme, BK gave consumers in New York City, Los Angeles, San Francisco and Boston a chance to exchange their ex-flames’ printed photos for flame-grilled Whoppers at select locations. Participants simply tossed their photo into “Birds of Prey”-themed “breakup boxes” to receive their free burger. New Yorkers were also invited to bring in love letters, stuffed animals or a specific piece of clothing to swap out and claim their reward. 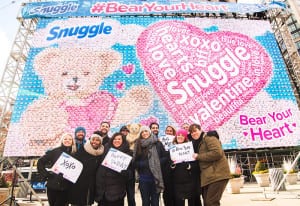 Leveraging survey data and other forms of consumer research has informed strategies for Valentine’s Day activations for brands including Godiva, Snuggle and Mars, and it could be a simple way to tweak your V-day strategy to meet your target’s wants and/or needs. As part of its 95th anniversary celebration, Godiva in 2022 erected two larger-than-life versions of its iconic chocolate boxes in New York that were supplemented by a robust street sampling program. Supporting the strategy was sales data, which showed consumption of chocolate was up in the U.S., as well as a Godiva Consumer Research Study that found that 75 percent of consumers planned to give chocolate and receive chocolate, and nearly half of consumers reported they planned to gift more chocolate than the previous year, to mark Valentine’s Day. (Agencies: Department of Wonder, experiential; Lippe Taylor, social, digital, p.r.)

For its candy-infused Sweet ReTREAT Valentine’s Day pop-up, Mars crafted its strategy based on a survey it conducted of 1,000 U.S. adults that explored their “treat habits.” The report revealed that 74 percent of people believe a treat is sweeter when shared with a friend. That statistic ultimately underscored the brand’s approach to the live experience, which required attendees to sign up for salon services with a friend or loved one.

And Snuggle drew inspiration for its #BearYourHeart campaign from a national survey conducted by Harris Poll on behalf of the brand, which underscored the struggles people face with expressing emotion. Survey results revealed that 37 percent of people find it challenging to express heartfelt emotion, while 10 percent said they’d rather go to the dentist than talk about their feelings. The brand’s response? A massive digital mosaic fueled by heartfelt notes consumers could write to loved ones without having to verbalize their emotions. (Agency: Inspira Marketing.)

Lines inevitably form around brand events, and Valentine’s Day activations are no exception, meaning consumers may be waiting around to participate in the experience for long periods. Rather than allow this pain point to emerge, there’s an opportunity to create a dedicated, branded space where people can hang until it’s go-time. Take a cue from Hallmark, which produced a Valentine’s Day Pop-Up Shop in freezing-cold Minneapolis that included a warming lounge where attendees could gather and thaw out. Or from Mars, which gave attendees of its Sweet ReTREAT pop-up a place to chill while they waited for their salon services appointments. The “Mars Wrigley Lounge” gave consumers a chance to kick back, relax and dig into a candy beverage bar. Plus, there were two roaming masseuses offering mini massages—a favorite among attendees. 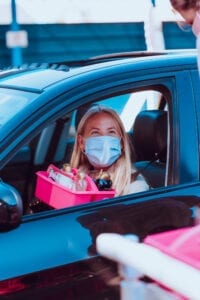 OGX hosted a love-themed drive-thru event that ended with a swag-filled shower caddy.

If swag bags or prizes aren’t part of your Valentine’s Day strategy, it may be worth adding them in as a means of both delighting attendees, and providing another branded moment that drives home your messaging. OGX made it happen with its Valentine’s-themed drive-thru car wash experience in Los Angeles. The activation tied into the hair care brand’s “Uncap the Love” campaign, which focused on inspiring self-love and confidence. Appropriately, attendees received a branded shower caddy containing full-sized products, a bottle-shaped air freshener, a branded shammy, a travel case and a CVS coupon for OGX purchases. To boot, at the end of the car wash, participants posed for an in-car photo, which they could access through a QR code included in their caddy. (Agency: MKG.) Mars also implemented the approach for its confectionary-fueled 2020 pop-up, providing attendees with generous goodie bags chock-full of Mars Wrigley candy to take home at the end of the experience.