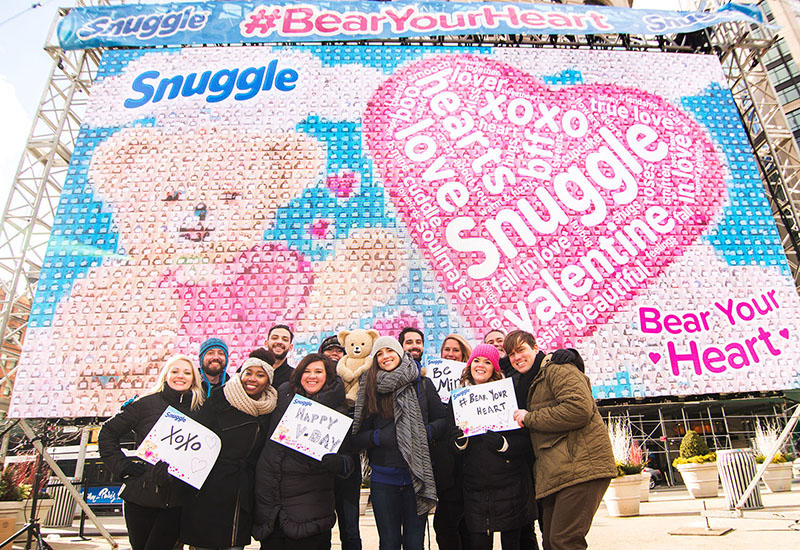 A frigid February morning in New York City was no match for the warmth of the Snuggle brand’s iconic mascot, Snuggle Bear, who on Feb. 11 encouraged consumers to “bear” their hearts in celebration of Valentine’s Day. The event capped off the brand’s #BearYourHeart campaign, which was strategically launched on National Hug Day, Jan. 21.

Inspiration for the campaign was derived in January from a national survey conducted by Harris Poll on behalf of Snuggle, which underscored the struggles people face with expressing emotion. Survey results revealed that 37 percent of people find it challenging to express heartfelt emotion, while 10 percent said they’d rather go to the dentist than talk about their feelings (yikes).

To help New Yorkers overcome the struggle, Snuggle Bear invited them to his bear den at Flatiron Plaza with the help of brand ambassadors who helped generate buzz and drive traffic to the site by handing out product samples and mini Snuggle Bear toys to passersby. The brand also recruited talk show host and comedian Loni Love to kick off the day’s festivities.

Inside the den, Snuggle Bear (operated by a puppeteer) greeted consumers and encouraged them to participate in a love note engagement. Participants were instructed to write a heartfelt message to a loved one on an oversized note card, then in a nearby photo booth had their picture taken holding the note. Each photo was then fed to a massive digital screen outside the bear den, where a mosaic of the day’s photos were updated in real time.

Those who shared contact information were emailed a copy of their photo and automatically entered to win a prize. Consumers whose photos landed on a designated prize space within the digital mosaic won a Snuggle-branded hat featuring bear ears, a blanket or, in one instance, a Valentine’s Day date package including restaurant reservations, car service and flowers. As an added bonus, each of the more than 10,000 consumers who visited the bear den was given a large, plush Snuggle Bear toy to take home.

A microsite that gave consumers the opportunity to send customized digital Valentines via email or social media, and Snuggle-themed emojis dubbed “LOVEmojis,” rounded out the seasonal campaign.

“This huge iconic digital billboard was a really nice way for us to try to take [the event] to that next level,” says Marcy Jarzabek, associate brand manager at Sun Products, Snuggle’s parent company. “It’s something that anyone is going to stop at that day as they’re walking through the city, whether they’re able to interact with us or not, and say, ‘Wow that’s pretty cool. I don’t see that everyday.’ So it just felt like the perfect opportunity for us… to celebrate the Valentine’s Day season and to really get our message across.” Agency: Inspira Marketing, Norwalk, CT.