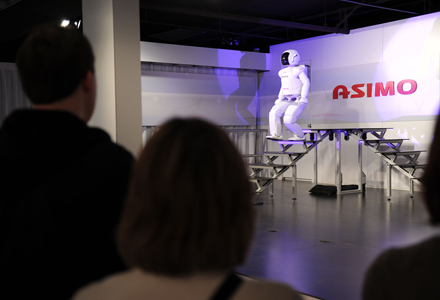 Though Honda has had a presence at the Sundance Film Festival in Park City, UT, for the last two years, this year it maximized its sponsorship investment with a full-blown six-day experiential space called the Power of Dreams Experience. From Jan. 21-26, the brand showcased its most innovative products in a 5,800-square-foot gallery space. It also premiered its latest film, “The Undying Dream,” which is part of a series of eight documentaries the brand has produced.

Honda’s experience was divided up into a variety of product displays, as well as a movie theater open to both festivalgoers and the community, including groups of school children that wanted to learn more about engineering. The experience began with Honda’s fuel cell electric vehicle FCX Clarity display, followed by a cut away of its new CR-Z sport hybrid vehicle, which reveals the intricate workings of the inside of the car. On a main center stage, visitors could catch 10-minute demos every hour on the hour by ASIMO (Advanced Step in Innovative Mobility), the world’s most advanced humanoid robot, which was created with the purpose of one day assisting people in their homes. There was also a HondaJet area focusing on the brand’s aviation work in the personal jet area. Plus, a motorcycles section with the latest fuel-efficient motorcycles, including the Honda Gold Wing, the first motorcycle to feature an airbag.

“More and more consumers are looking for information and context around who is building the products that are being sold to them. Who is behind the car that I’m driving or the lawn mower that I’m using?” Barbara Ponce, manager-corporate advertising at American Honda Motor Company, told Buzz. “We see a great opportunity at Sundance to share our messaging with an audience that’s very receptive to exploring innovative ideas.”

At the back of the venue, visitors could view eight Honda short films, including “The Undying Dream,” which are all part of its Dream The Impossible documentary series. The movie, directed by Sundance Grand Jury Prize Winner Ondi Timoner, features big wave professional surfer Laird Hamilton, motorcycle racers and Honda employees sharing their dreams and their paths to accomplishing them. Honda showed the movie to the public for the first time at its experience, and streamed a sneak preview to its Facebook fans via its YouTube channel.