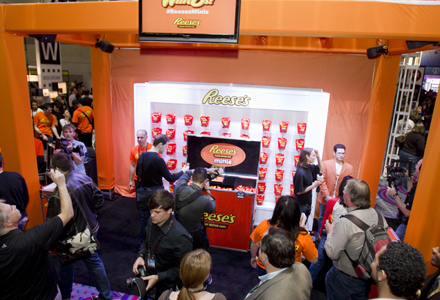 Reese’s Peanut Butter Cups, the Official Candy of the Consumer Electronics Show, which was held Jan. 6 to 9 in Las Vegas, took its inspiration for the unveiling of its new Minis from a typical Silicon Valley product launch, but did so in its own sweet way. The candies, which Reese’s calls the “Next Big, Little Thing,” are about the size of a dime and come in a resealable, standup pouch.
Borrowing a page from some of the high-tech exhibitors at the show, Reese’s set up a 10-foot by 20-foot orange Reese’s box and a countdown to a big unveiling in the Grand Lobby of the convention center at noon on Jan. 6, the first day of the show. Tech personality and internet entrepreneur Chris Pirillo of Lockergnome and Jim St. John, vp of research and development at The Hershey Company, which owns the Reese’s brand, opened the box to reveal one teeny, tiny Mini on a glass pedestal. Tall male models also reinforced the size theme.
To build buzz prior to the show, Reese’s worked with tech influencers to create teaser videos to drive visibility for the launch. The videos spoofed the “unboxing” trend in the tech world, but didn’t reveal the product.
The company also partnered with Intel to release a photo on Jan. 6 that compared the new second generation Intel Core processor with the new Reese’s Minis and a dime.
“As technology gets smaller and smaller, anything from chips to MP3 players to cell phones, so does our candy,” Anna Lingeris, public relations and brand communications manager at The Hershey Company, told Buzz. “We thought CES offered a great audience, a variety of media and with the tie-in to technology and size, we thought let’s go for it.”