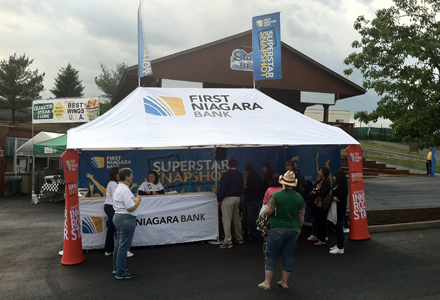 First Niagara Bank is leveraging its sponsorship of the First Niagara Pavilion, an amphitheater in Burgettstown, PA, with a music-themed photo activation on concert days that encourages people to visit local bank branches to open checking accounts. The first “Superstar Snapshot” activation took place on June 2; there will 12 more throughout the summer.

At each event bank staff drives traffic at the venue gates to its 10-by-20-foot booth inside where additional staff guides concertgoers through the activation. There are seven music genres to choose from—country, soul, rockabilly, southern rock, glam rock, hip-hop and hippie. The set-up is reminiscent of the face-in-a-hole cutouts that you see at fairs and festivals. Staff captures people’s emails then snaps their picture, which is automatically sent to concertgoers’ accounts to share via social media.

“We wanted to engage fans with something a little new,” Kimberly Jackson,  vp-sponsorships-brand activations at First Niagara, told Buzz. “Last year we were just handing out a paper saying open up an account and get two free tickets to a future show. This year we decided to kick it up a notch. We’re only four shows into this season and we’re over 50 percent from where we were last year.”

The paper handout from last year has been replaced with a new activation card that has some music-related graphics in the front, plus a mini map of the venue, and on the back additional information about opening an account and receiving free concert tickets as a reward. Agency: Cenergy, East Aurora, NY