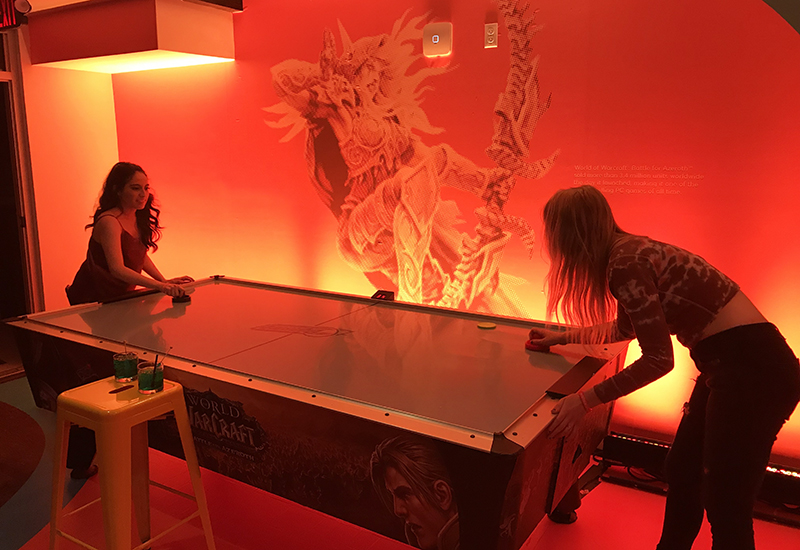 Activision Blizzard Media created a two-story arcade for attendees of SXSW in Austin this year, activating March 8-11 at its first-ever appearance at the festival. The publisher is best known for intense, immersive games like Call of Duty and World of Warcraft, but with the recent acquisition of mobile game publisher King (Candy Crush, Farm Hero Saga), Blizzard focused on entertaining all types of gaming fans at the festival.

Blizzard’s primary objective was to woo potential advertisers. “We’re allowing advertisers an opportunity to integrate with our stories, the immersive entertainment, the storytelling, being a little off color and a being a little fun,” says Jonathan Stringfield, vp-global business marketing, measurement and insights at Activision Blizzard Media. “And if you’re going to have people experience gaming and get it, you’ve got to have them gaming.”

The event’s call-to-action, “unlock the gamer within,” invited attendees to play games of all kinds, from Guitar Hero to a claw machine to traditional console play. “The big stereotype is that gamers are young males eating pizza and playing games in the basement,” Stringfield says. “But we have a portfolio of mobile games, including Candy Crush. If you have a phone and you have a game on it, you’re a gamer. We want to be represented across anywhere and anyhow people want to game.”

Rather than setting up consoles or phones for every game in its portfolio, the brand highlighted the “lore and legacy” of several games to make it accessible to a larger audience. “A lot of our core franchises aren’t super pick-up-and-play friendly,” says Stringfield. “You need some degree of knowledge, so we wanted to ease everyone into it and make sure all the thematics were here.”

The first-person shooter game Call of Duty can be intimidating, for instance. “But something more accessible, like Skee-Ball, that everyone knows how to play, helps attendees understand a little bit about the game without having to sit there and actually play it.” Another game that requires preexisting knowledge, World of Warcraft, made an appearance as a branded air hockey table.

The second floor featured something for the enthusiast gamers, with consoles and headsets set up for competition. But that format was in the minority. To reflect the game Candy Crush, the brand sold super sweet drinks and added a colorful “Sugar Crush” sign behind the bar. It also served rock candy and set up a pair of basketball arcade games called “Sweet Swish.” A Bubblewitch 3 claw machine game and cornhole branded with King’s Farm Heroes Saga—down to the bean bags—added more of the King portfolio to the experience. Following is a photo tour of the activation’s touchpoints. Agency: N/A Collective, New York City.