Higher Education: Inside the Weedmaps Museum of Weed – Event Marketer 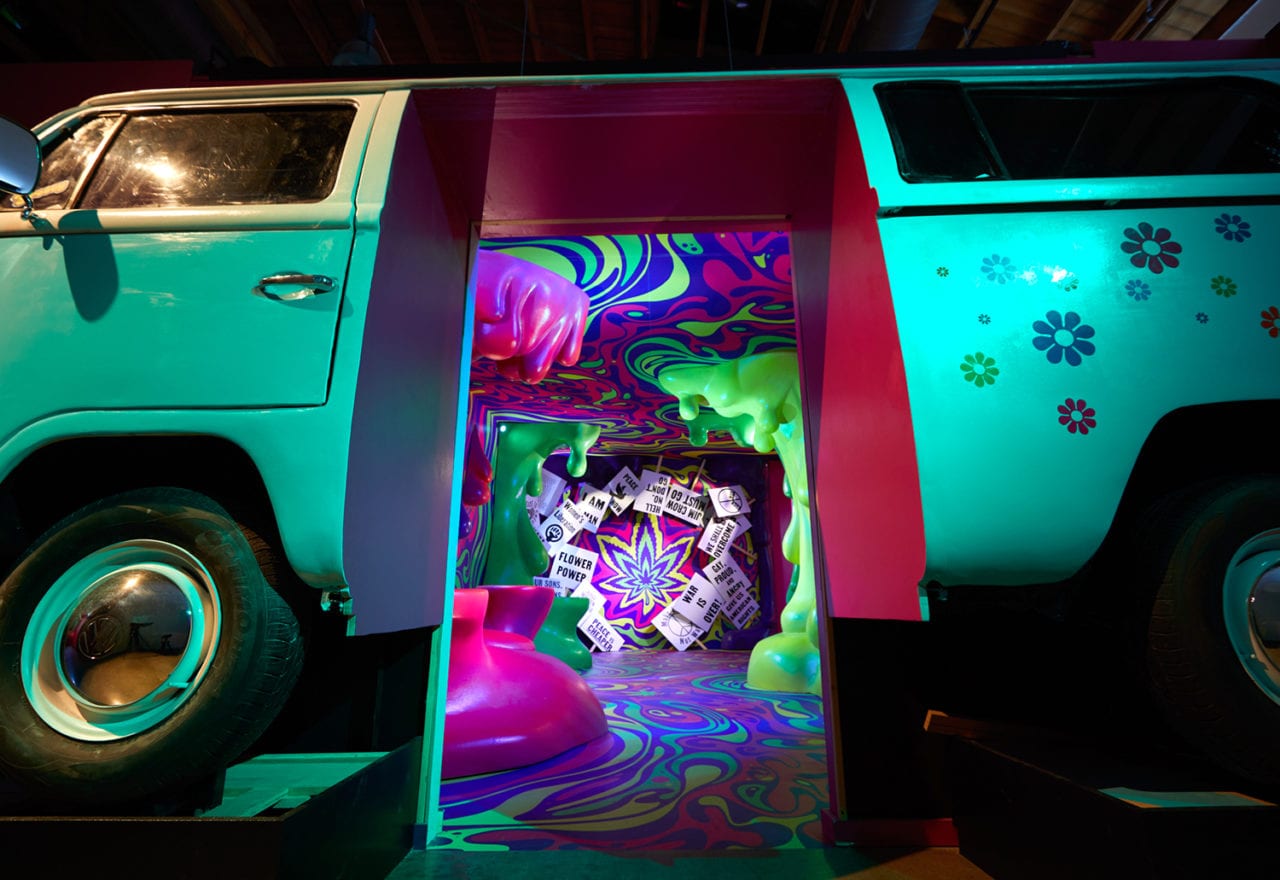 Higher Education: Inside the Weedmaps Museum of Weed 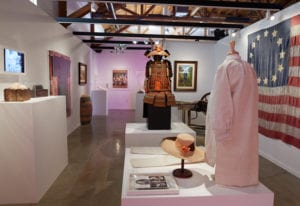 A mix of artifacts and interactives are designed to educate attendees on the evolution of cannabis.

The legalization of cannabis consumption has made the plant a hot topic of late, but human interaction with marijuana dates back to ancient civilization. From binding samurai armor together to easing the effects of chemotherapy, cannabis has an extensive history that encompasses a range of uses, cultures and time periods. To illustrate this evolution while giving its brand a boost, digital cannabis platform Weedmaps developed an entire museum dedicated to getting the public up to speed. Open Aug. 3 through Sept. 29, the Weedmaps Museum of Weed, located in Los Angeles, takes consumers on a 30,000-square-foot journey through the history of marijuana.

The museum features a full cafeteria, merchandise shop, snack bar and plenty of lounge space, but at the heart of the experience are a “Plant Lab” and seven meticulously curated exhibits, arranged chronologically, that offer fun, educational touchpoints while encouraging attendees to support reform efforts.

The first stop, Pre-Prohibition, is presented as a traditional art gallery exhibit. The space features facts on the earliest uses of cannabis, including the first recorded use of medical marijuana, with artifacts to supplement them. Among the featured items: authentic samurai armor and a complete recreation of Betsy Ross’ original American flag made out of hemp. Then it’s on to the Age of Madness exhibit, which examines the use of cannabis propaganda to fuel racial tensions and panic in the early part of the 20th century. In the space, attendees learn how films like “Reefer Madness” generated widespread fear and misconceptions about cannabis use that lasted nearly a century. To bring the concept to life, Weedmaps created a “madhouse environment” that included old propaganda posters, bold graphics, examples of 20th century yellow journalism, and a look at the Mexican Revolution.

The third exhibit, Counterculture Revolution, offers a psychedelic immersion into the mid-20th century when a new generation stepped onto the scene, advocating for cannabis as a symbol of love and peace. Activist posters and trippy visuals line this exhibit to underscore the chaos of the era. Here, attendees learn about the Brotherhood of Eternal Love (the “hippie mafia” that aimed to inspire a psychedelic revolution in the U.S.), a brief history of music and cannabis, and the growth of mysticism.

Then over at the Behind Closed Doors exhibit, attendees are introduced to the key players in the War on Drugs movement. The space demonstrates how laws and regulations of the era targeted specific communities. 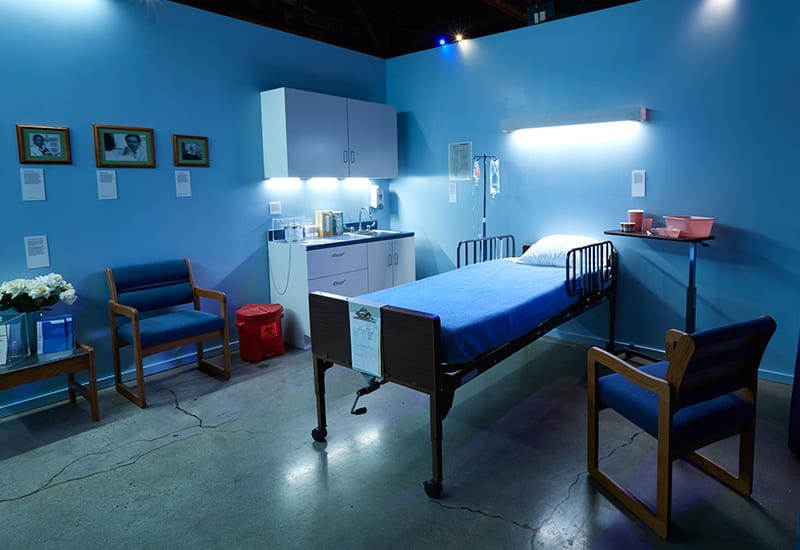 The Dose of Compassion exhibit highlights a turning point in the history of medical marijuana.

“This is when the Shafer Commission basically came out and said, ‘Marijuana is not [as bad as] we think it is,’” says Julie Stein, executive producer of the Weedmaps Museum of Weed. “But Nixon said, ‘No, it is. We’re going to make it public enemy No. 1.’ So it became this war on drugs. From a production standpoint, the exhibit is really interactive. We have a big lenticular in the space where you see the two sides of Nixon, and then a more abstract installation with CRT TVs where they’re really ping-ponging between the two sides. This is when activist groups like Yippie and LEMAR and Norml were established. At the same time, this is when the DEA was formed. So we bounce back with conversations between all of the parties.”

The fifth exhibit, Entrapment, transports attendees to the Regan era during which some of the strictest cannabis laws in history were passed, leading to mass incarceration. In partnership with the CAN-DO Foundation, Weedmaps is leveraging the space to spotlight four people who are currently incarcerated for non-violent marijuana crimes. Within the exhibit, attendees participate in a visitation booth experience during which they walk through a replica jail cell block to a station where they can listen to the personal stories of the four incarcerated individuals, some of whom are in prison for life. Consumers can sign petitions to fight for those individuals’ clemency, brush up on statistics around dollars spent on incarceration for non-violent marijuana crimes, and review artifacts like old D.A.R.E. kits from drug education programs, board games and marijuana tax stamps.

“We really wanted to provoke emotion. There are moments where I’ve seen tears in people’s eyes when they’re hearing these stories and seeing some of the things that people went through to get to where we’re at,” says Stein.

Then it’s on to Dose of Compassion, set in the 1990s, when cannabis’ position in society evolved from counter-culture to pop culture. The exhibit portrays the bedroom of a ’90s-era kid, with cannabis posters, shelves lined with bongs and other references pointing to the plant’s progression into the mainstream. From there, attendees are transported into a replica hospital room from San Francisco General Hospital, the first facility to provide hospice services to people dying of AIDS. This marked a turning point in the history of medical marijuana legalization, including the establishment of the Cannabis Buyers Club (CBC) and the first medical marijuana dispensary. Weedmaps worked directly with the founders of the CDC, including some of the individuals who wrote Prop 215, to curate the exhibit.

“We really wanted to provoke emotion. There are moments where I’ve seen tears in people’s eyes when they’re hearing these stories.” —Julie Stein

In the last exhibit, Legalization, attendees engage with an interactive, motion-sensing timeline that guides them through pivotal moments in cannabis history. There’s also a data visualization that examines everything from the financial benefits of cannabis legalization to cannabis support from political parties. The final stop is at the Plant Lab where attendees learn about the anatomy of the plant and how its various components interact with the body. Consumers can compare THC against CBD, learn about different types of cannabis extractions and consumption technology and smell a variety of terpenes. At the core of the Plant Lab experience is a large installation detailing the body’s endocannabinoid system, which illustrates how humans react to cannabis consumption in different forms.

“The feedback has been overwhelming,” says Stein. “People who have never been interested in cannabis or aren’t connoisseurs are excited to learn about the plant. And that was really what we wanted to do—destigmatize it and make it approachable. It’s pretty amazing seeing people interact, engage, have fun and have their ‘a-ha’ moments.” Agency: Virtue, Los Angeles.

Take a Tour of the Weedmaps Museum of Weed: