Why the Industry is Embracing the Tiny House Trend – Event Marketer 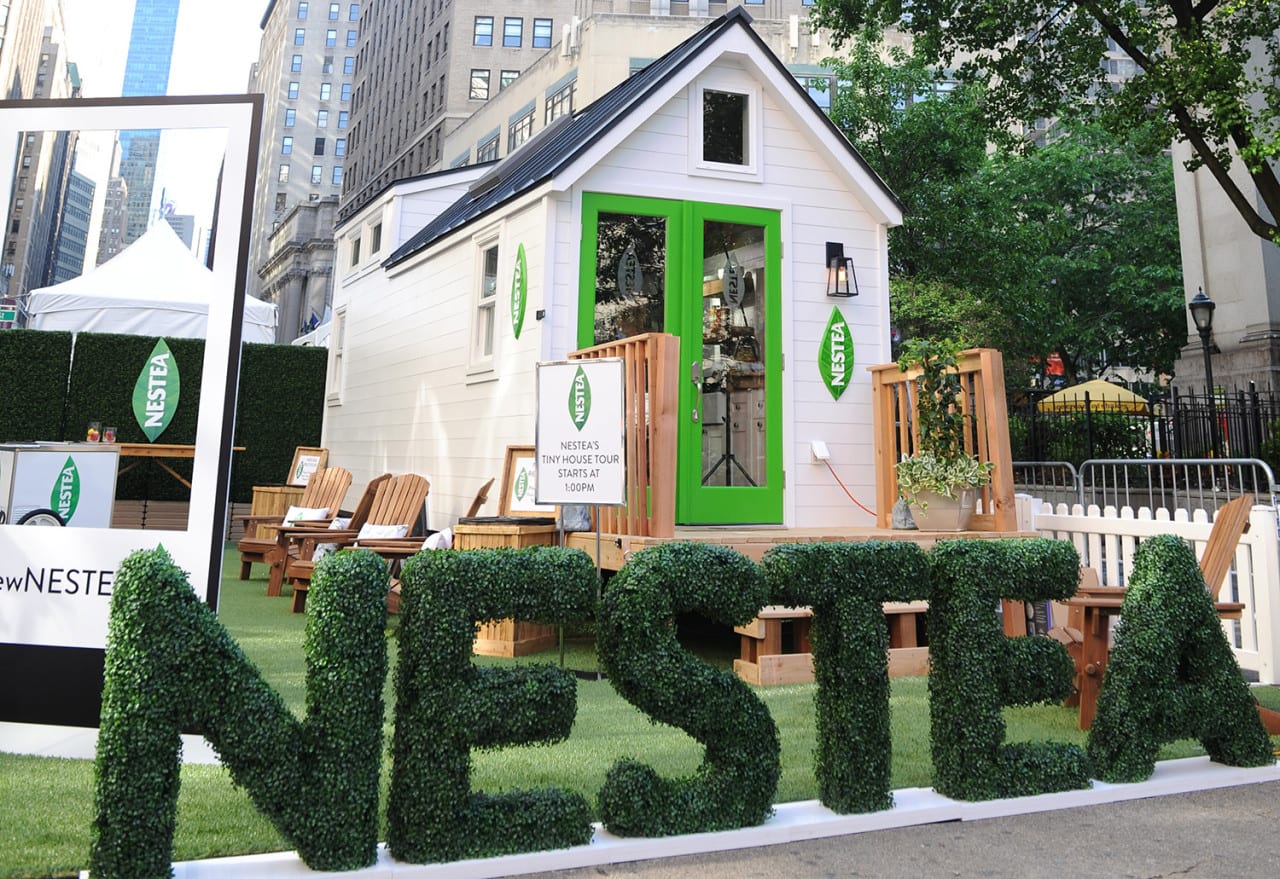 Why the Industry is Embracing the Tiny House Trend

Five brand activations that leveraged the ‘less is more’ mentality

Tiny houses are a big thing right now—the object of TV shows, lifestyle websites and magazine photo spreads. Their dimensions, ranging anywhere from 100- to less than 500-square-feet, have made them a popular choice among millennials, baby boomers or anyone looking to downsize and simplify. Often priced at less than $50,000, tiny houses also offer an affordable option for people concerned about the environment. After all, a tiny house costs a lot less to light, heat and cool than a typical 2,000-square-foot abode.

Tiny houses are also relatively easy to build and move from place to place, a fact not lost on event marketers who have jumped on the tiny house bandwagon as well. SPAM, NESTEA, Google, State Farm, Taste of Home and many others have leveraged them for activations. Here’s a closer look.

SPAM capitalized on the tiny house trend as part of a Tiny House of Sizzle Tour that traveled to fairs and festivals in 12 cities. Through consumer research, SPAM discovered that people enjoy SPAM mainly in the comfort of their homes, an insight that it tied to the tour. “We’re sharing that sizzle, that crave-able moment in the format of a tiny house,” says Resha Hovde, SPAM brand manager at Hormel Foods. “It’s kind of hard to take a big house coast to coast, but we could take a tiny house and share some amazing recipes right from our tiny SPAM kitchen.”

The tour showcased the versatility of the tinned meat product that dates back to 1937 and was a dietary staple for GIs and sailors during World War II, and presents it in ways to appeal to modern palates. Among the offerings served from SPAM’s tiny kitchen: SPAM sliders; SPAM Musubi, a favorite in Hawaii, in which the meat is served on a bed of rice with teriyaki sauce and wrapped in Nori seaweed; and other choices made by local chefs and influencer partners (Agency: Match Marketing Group, Norwalk, CT). 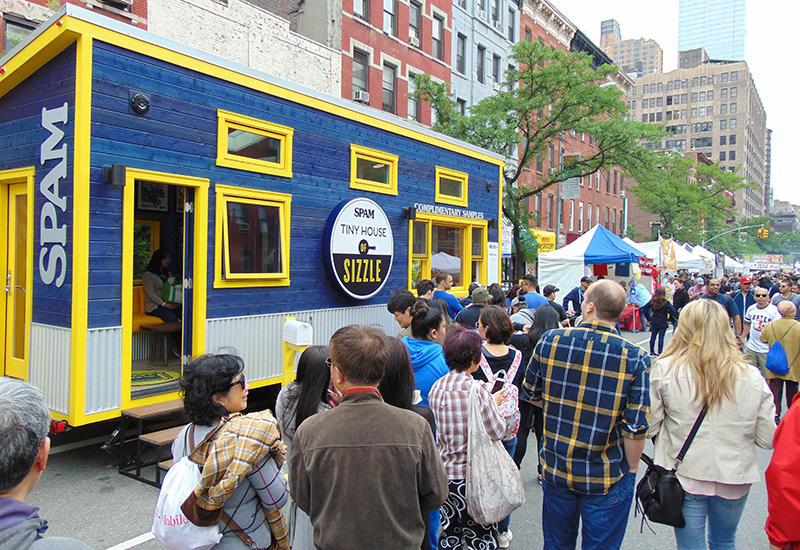 Consumers this summer are enjoying culinary creations featuring the sizzle of SPAM in a tiny mobile sampling unit.

NESTEA erected a 200-square-foot house in New York City’s busy Times Square that connected the desire to simplify with its new line of teas made from simpler recipes than in the past and teas made without high-fructose corn syrup and artificial flavors or colors. Consumers were invited to stop, reflect, enjoy the scenery and, of course, sample. “The tiny house reflects the joy of living simply, which is what our new relaunched NESTEA is all about,” says Karen Ress, vp and gm of Tea Brands at Nestlé Waters North America which owns the brand.

Lifestyle bloggers Southern Bite, Inspired by Charm and Hapa Time helped design the house, which featured a fold-down kitchen table to conserve space, a living room couch that converted into a lounger for relaxing and a cutting board installed above the trash for ease of cooking and cleaning up in the tiny space. Brand ambassadors led tours of the tiny house and distributed samples of all seven new NESTEA flavors, which hit retail shelves just in time for summer with new packaging that also reflects the less-is-more philosophy (Agency: Eventage, South Orange, NJ). 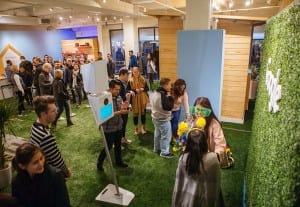 The event footprint was designed to look like a neighborhood with turf grass and natural accents.

Google created a neighborhood of tiny houses designed by three YouTube influencers for block party activations in Los Angeles and New York City complete with turf grass and natural accents to showcase Google Home, its hands-free speaker and home assistant, and updates to its Google Play Music service. The influencers each curated a tiny home that reflected their personal style and aesthetic with décor, wall art, photographs and iconic pieces from their YouTube videos and sets. They also explained how using the Google products improve their everyday lives and productions. Attendees got hands-on with the products and could experience Google Play Music by casting music to a wall of speakers via Chromecast Audio. A GIF booth tied to #GoogleBlockParty and Wall of Sound, and the events featured a Snapchat geofilter, too (Agency: Grow Marketing, San Francisco).

State Farm hit the road with a tiny RoadHouse that brought the fun of tailgating to football fans in stadiums and at home, and taught them a thing or two about home and auto insurance as well. The RoadHouse featured a real front door and an attached chimney with “smoke,” triggered by a remote. A smart TV inside broadcasted the game live or switched to a digital game. To engage fans at home, State Farm created a Housegating Playbook and a 360-degree video of the RoadHouse, all with the idea of driving home its message that State Farm is here to help (Agency: The Marketing Arm, New York City. Build: Turtle Transit, Hudson, MA). 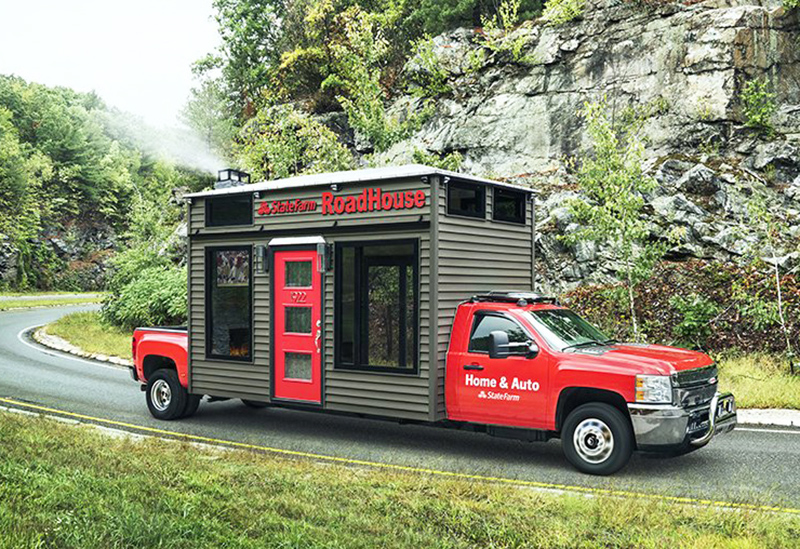 State Farm drove a connection between its home and auto insurance offerings for football fans.

Taste of Home’s tiny house took the form of a gingerbread installation for the holiday season in New York City’s Madison Square Park. Built with bricks and topped with a “frosting” roof, the tiny house engaged visitors with virtual and interactive elements, including “America’s Holiday Mantel,” a digital screen that displayed consumer-submitted photos. Attendees also received free cups of Folgers coffee and gift bags containing a can of Folgers and a copy of Taste of Home magazine (Agency: In-house).