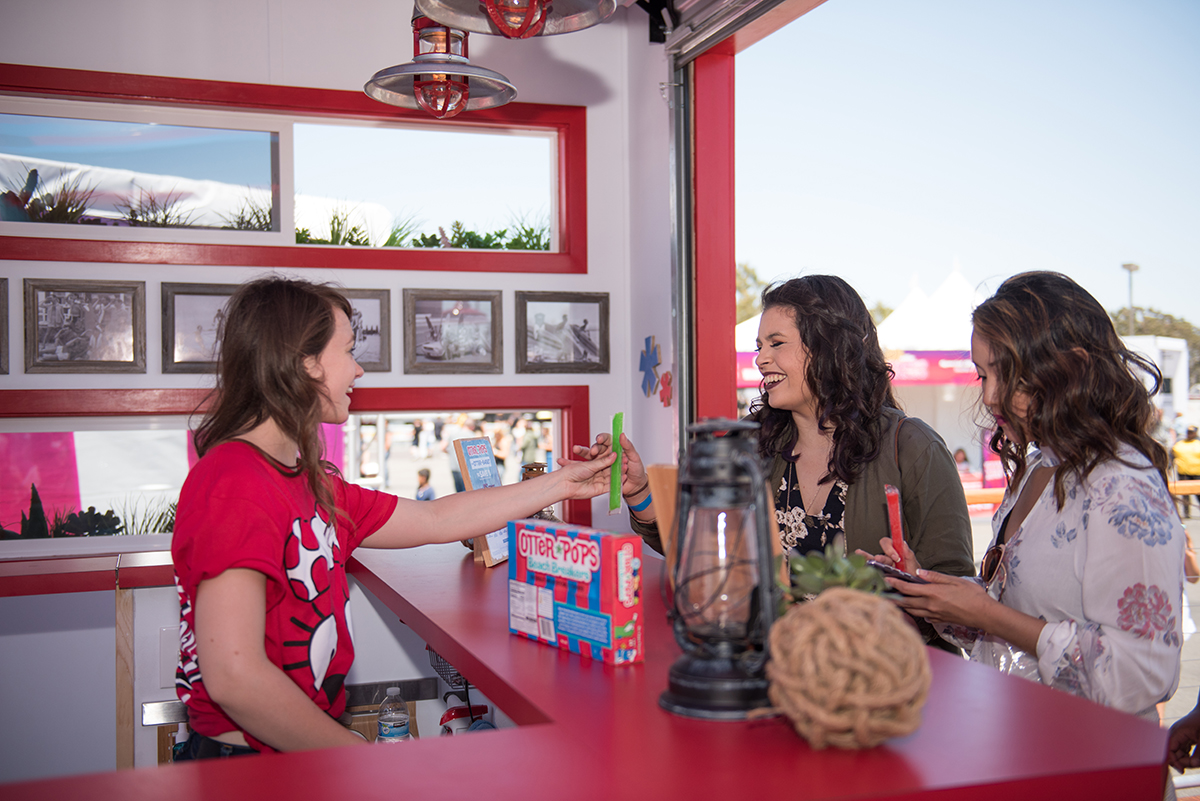 Paying homage to its West Coast roots, the 47-year-old Otter Pops flavor ice brand, a Jel Sert Company product, has activated a beach bungalow-style tiny house sampling activation that is traversing Southern California through the summer season. The Otter Vibes Tour kicked off April 30 at the Walmart Supercenter Store in Lakewood, CA, and will have hit retailers, major events like iHeart Radio Wango Tango Concert and the World Series of Beach Volleyball, and iconic beaches, before it wraps Sept. 24 at the Marine Corps Air Station Miramar Air Show.

The 18-foot by 26-foot Otter Pops “bungalow” has a beachy, industrial-cool feel with cedar wood planking, metal and wire deck railings with the brand’s signature blue and red logo colors and whimsical otter characters as accents. Consumers step up into the tiny house bungalow footprint and head to the sampling bar where “poptenders” dole out one of six fruity flavors. While enjoying the treat, they can view custom content on flat screens.

From there, consumers head to a photo booth for a branded snapshot or Instagram Boomerang video to share on social media with #OtterPopsVibes. They can then spin the wheel for a variety of branded premiums, ranging from tour tank tops to sunglasses to bandanas, and then physically “make their mark” on a wall inside the space where they can write down their memories of when they first enjoyed an Otter Pop. In turn, there are plenty of testimonials to read and snap and share, too.

Outside the build, there are lawn games like giant Jenga as well as music and lounge chairs. The activation features a full audio system, but at various stops local musical acts perform in the space. On the side of the build, consumers can snap more photos with the otter characters (Sir Isaac Lime, Alexander the Grape, Poncho Punch, Strawberry Short Kook, Louie-Bloo Raspberry, and Little Orphan Orange).

To kick off the tour in April, the brand announced the launch of the new Otter Pops Beach Breakers, original Otter Pops flavors served up in a smooth sorbet texture. The new product arrived on local California retailers’ shelves in time for the summer.

“We really wanted to reinvigorate this brand because it has had such a strong following and is growing, too, even without a super strong marketing program behind it for many years, so we wanted to generate awareness behind this equitable brand while at the same time, from a sales standpoint, continue to close distribution gaps on the West Coast,” says Gavin Wegner, associate marketing manager at The Jel Sert Company. Agency: ZOē Productions, Orange, CA.

• Why the Industry is Embracing the Tiny House Trend