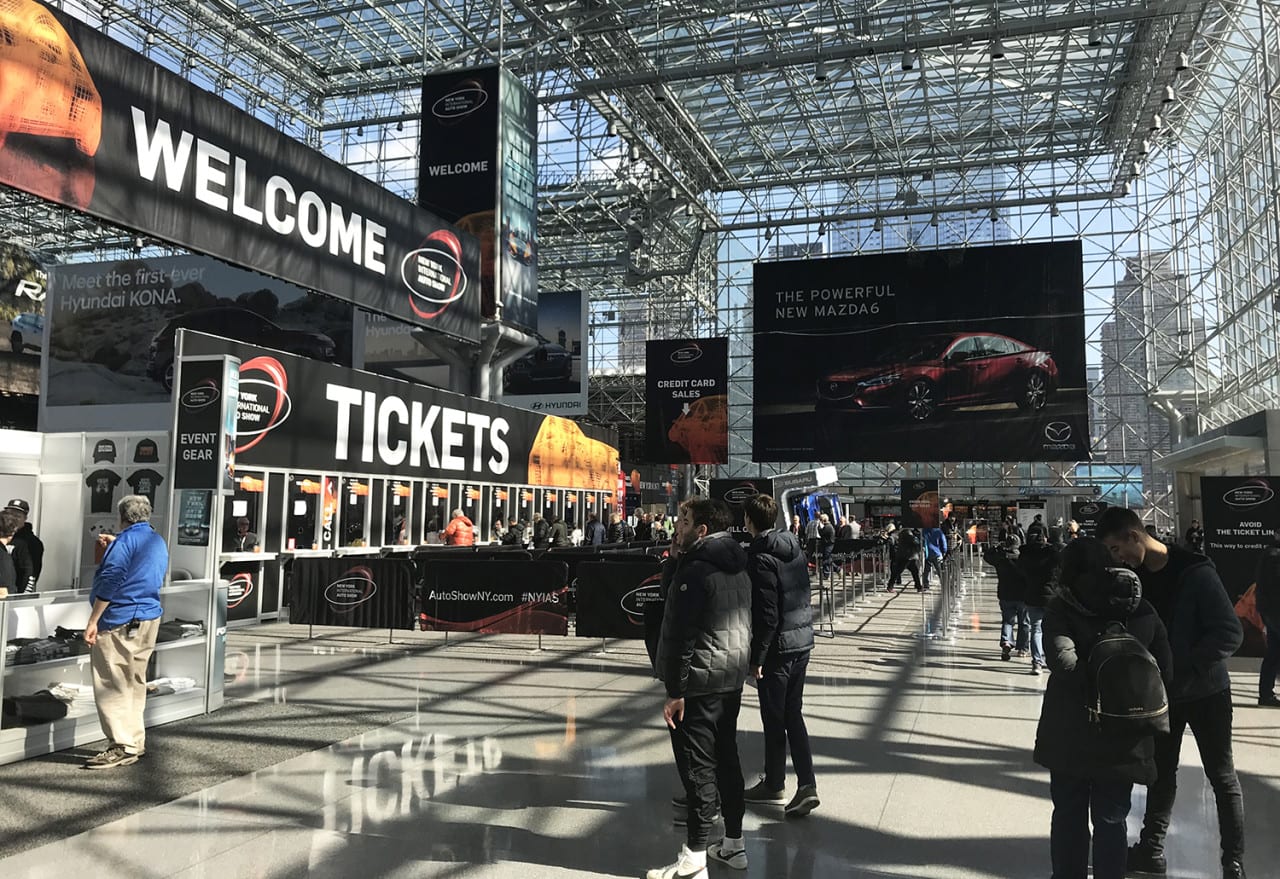 From safety and security to innovation and design, the auto brands at the 2018 New York International Auto Show, March 30 through April 8, at the Javits Center in Manhattan, had plenty of stories to tell about their latest offerings. To engage consumers in those stories, they leveraged immersive technology, social media scavenger hunts and emotion-evoking moments, among tactics. What resonated most? Six topline experiential trends that emerged from team EM’s spin around the show floor. 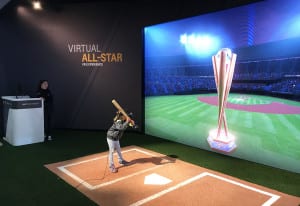 Young attendees engaged in AR and VR experiences as much as their older counterparts.

To drum up buzz for the launch of the 10th generation Accord, Honda created an AR experience dubbed the HondaLens, built on the HoloLens platform. Consumers were able to walk around the vehicle while learning about its technology and history and view dynamic animations—effectively virtualizing the car manual.

We saw another HoloLens experience over at Nissan, where the brand educated attendees on the drivetrain, safety and autonomous features of the new Nissan Leaf by illustrating the invisible world that’s actually happening around the car through sensors and cameras that enable intelligent features. Consumers could also unlock immersive product features from their devices via the Nissan Innovation Experience. Wherever they saw a smartphone icon in the exhibit, they could open the app to reveal an AR overlay bringing to life additional vehicle information.

Over at Acura, consumers could design their own professional racecar in the NSX GT3 VR simulator while getting their hands on an actual steering wheel, and both Volvo and Toyota illustrated safety technologies through VR activations. Adding a little comfort to the booth this year, Toyota’s Fine Comfort Ride VR Experience let consumers sit back and enjoy the (automated) ride.

One of our favorite observations? Young consumers (really young) engaging in AR and VR—even if some of the headgear threatened to topple them over. We spotted a quartet riding Ford’s City of Tomorrow VR ride, which took them through a futuristic city and detailed Ford’s vision of the connected future. The ride’s intermittent shaking resulted in a moment of partial panic for one little tyke, but he soon stabilized after a quick peek at his neighbor. 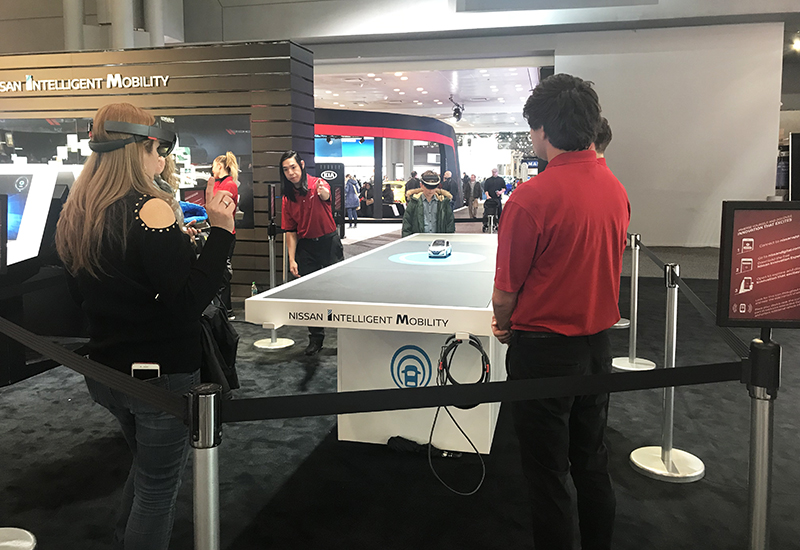 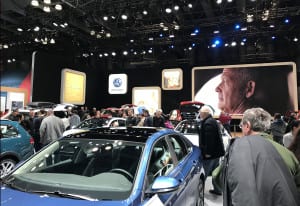 We saw plenty of examples of nostalgia marketing on the floor. But it wasn’t just for the older folks. The nostalgia trend is succeeding at entertaining all generations—and that’s imperative when families take an entire day to spend at the auto show.

Volkswagen’s space, for instance, was populated with oversized, framed family photos, reminiscent of filtered Instagram pics (for the younger set) or Polaroids (for the analog inclined). And its interactive Flip Disc Display, which used black and white metal discs to display brand messaging while capturing images of consumers through two cameras below the screen, harkened back to those old train station schedule boards.

Meanwhile on the lower level, the Chevy truck exhibit displayed vintage brand memorabilia including classic steering wheels, old photographs, illustrative advertising and hub caps. Over at the Porsche booth, a classic 365 Porsche was on display—complete with a vintage, leather-bound suitcase strapped to its rear—giving a nod to the brand’s history while also celebrating the newer models and high-tech features with video walls and slick, modern design elements throughout the space. 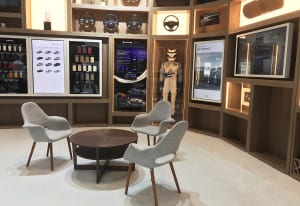 The influence of mid-century modern design was another show motif, primarily among the luxury brands. Lexus impressed us with a massive, interactive wall featuring synchronized video screens, driver Scott Pruett’s racing suit enclosed in glass, a Lexus hoverboard and much more, all encased within what reminded us of a giant wood-paneled speaker cabinet. Minimalist furniture sat nearby for pit stop, if needed.

At the Lincoln exhibit, a new build for the New York Auto Show, an elegant, semi-private café—serving specialty coffees inspired by the Lincoln Black Label Navigator—was on hand for invited guests who wished to relax, regroup and charge up.

Volvo’s space featured wood paneling and pillars separating the various levels of the build, and simple, functional furniture for guests experiencing Volvo innovations through VR. Meanwhile, Acura’s lounge space (more on this below) was the picture of mid-century modern with its clean lines, open space and chic furniture.

What struck us immediately upon entering the show was the proliferation of massive video walls, which continues to be a top trend at trade shows. Indeed, when your competitors have literally set up shop adjacent to you, creating an experience that is choreographed and larger than life is critical. Volvo’s hyper-realistic video wall, in particular, was arresting—precisely because of how little movement was perceptible. Subtleties, such as clouds moving across the horizon or a car’s headlights in the distance meandering across a scenic landscape, were fascinating. 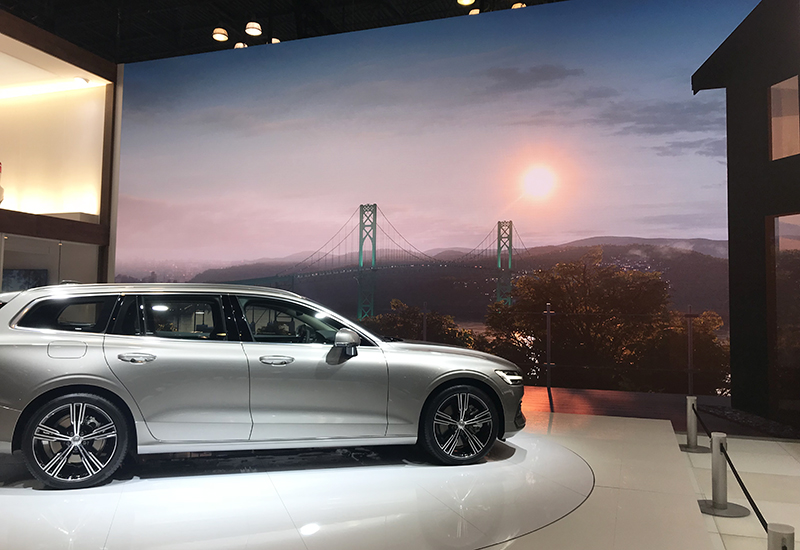 Massive video walls, like this Volvo screen, continue to be a top trend at trade shows.

Lexus’ video program was, in contrast, big and bold, covering not one but two entire walls. And then there was Ford, whose video wall of a futuristic cityscape communicated the brand’s vision of the future—where the world is connected and Ford is that conduit. Complementing Ford’s video wall were periodic urban-themed performances from The Luxury Brothers (street performers from Brooklyn, NY), musician The Mad Violinist and New York City hula hoop expert Xander the Hoope. As a complement, the aforementioned VR experience took you through the cityscape in a more immersive fashion. 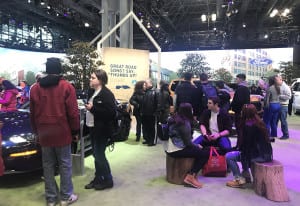 While not a new phenomenon, we observed a few fresh styles of lounge seating worth noting at the New York Auto Show. Acura’s rest stop took the top prize. The brand created a quiet, industrial cool-inspired space behind a nearly two-story-tall semi-transparent video wall outlined in window casements. Mid-century modern chairs and coffee tables with succulent plants on top lined the window wall, giving consumers a prime view of Acura’s gleaming white vehicles on display on the other side. Buick leveraged a similar design, with mid-century modern chairs lining the back of its structure, out of the way of the major foot traffic. And Ford’s city-inspired booth, complete with faux trees and boxwood bushes, pedestrian crosswalks and “bike paths,” offered consumers clusters of tree trunks and stacked “tires” to sit together on, and park benches, of course.

Exhibits across the show floor rewarded consumers for posting and tagging brands on social media. Toyota invited consumers to “Make Your Mark in New York” on a giant wall mural of the Manhattan skyline made up of small square printouts of consumers’ photos snapped within the exhibit. The oversized instructions invited consumers to Snap, Share (with #Toyota, #LetsGoPlaces or #NYIAS) and then Stick a printout provided by a brand ambassador of their image onto a corresponding location within the mural, based on color schemes. They also received a branded printout to take home as well an email with the image as it appeared on the mural.

Mazda offered a custom auto show graphic overlay. On signage within the space, the brand instructed consumers to snap a selfie or photo using their device and then text it to a phone number provided using the #ExperienceMazda hashtag in the message. They received a text response of their photo with a “sketched” Manhattan skyline and Mazda logo overlaid onto the image to then share out using the hashtag. 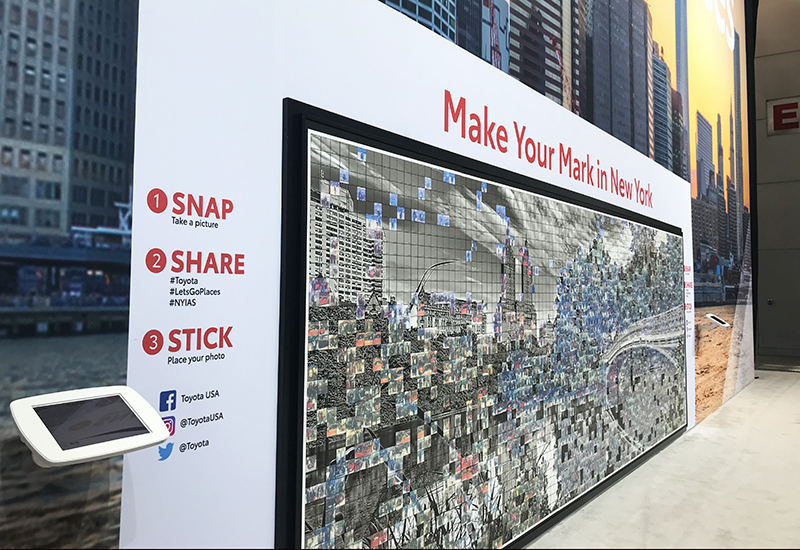 Toyota invited consumers to “Make Your Mark in New York” on a giant wall mural of the Manhattan skyline.

In the Ford exhibit, consumers were encouraged to build their own Ford Lego “Minifigure” of a racecar driver (complete with a Lego head that matched their features). Then, they were invited to place the creation in one of the Ford Lego vignettes provided and share it on social media with #FordNYIAS to “make it the star” of the show.

Chevy tied social media engagement with an exclusive giveaway. Users of Snapchat were invited to access different “clues” in the form of Snapcodes throughout the exhibit, photograph them using the Snapchat app, and then visit the information counter within the footprint to supply the evidence and receive a custom Chevy Camaro Hot Wheels diecast toy car.