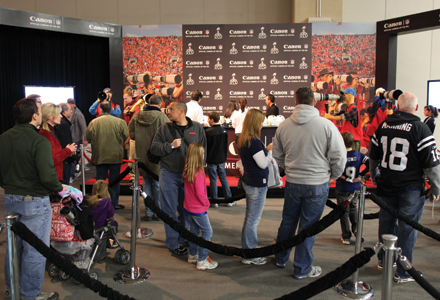 The biggest challenge in identifying how sports fans want to be engaged isn’t lack of information about who they are, what they’re watching and when or even where—it’s why they’re so passionate about their particular sport. So in recent years, event marketers have developed more rigorous research methods to get at the heart of why fans have an affinity for certain sports over others. Once they identify the why, it’s a lot easier to create sports activations that are truly meaningful and memorable to that fan base.

As two of the biggest sporting events of the year kicked off—the Super Bowl and the Daytona 500—EM checked in with the folks on the ground to understand the inner workings of their fan bases and how they have used new research insights to boost fan engagement.

Norwalk, CT-based sports agency Octagon figured out the “why” for wireless company Sprint, title sponsor of NASCAR’s Sprint Cup Series, using its research program Passion Drivers 2.0, a program specifically designed to quantify what drives fans of specific sports. The agency looked at 10 different sports in the U.S., conducted focus groups, came up with 300 reasons why fans are fans and eventually boiled the research down to 56 attributes that form the heart of a quantitative questionnaire that it now serves to over 60,000 fans. Based on the 56 attributes, Octagon identified 12 factors that are dimensions of fandom. Then, on a sport-by-sport basis, they figured out what the relative contribution of those factors is in defining the relationship between that fan base and sport. “Driver affinity,” for instance, was a major contributor to the success of Sprint’s sports activation at the Daytona 500, where drivers reign supreme.

“Anecdotally, everybody believes that NASCAR fans have a particularl favorite driver, but our work with Octagon shed more light on the fact that it’s a huge component for every fan who is there,” says Steve Gaffney, vp-corporate marketing at Sprint. “That simple validation then created for us the necessity to program for an experience with live interactions for drivers on a very consistent basis.”

At the 100,000-square-foot Sprint Experience at this year’s Daytona 500 it was all about the cars and their drivers. Fans could get up close with functioning show cars and the NASCAR Sprint Cup Series championship trophy, and most importantly meet their favorite drivers who came by the footprint throughout the weekend. There were also eight full-motion racing simulator rides to get fans in on the racing action. Another big draw was an 18- by 32-foot high-definition Jumbotron showing races and driver interviews.

“I think it’s a little presumptuous on the part of any brand to believe that simply their brand or value proposition is going to attract a fan into their experience,” says Gaffney. “In the absence of compelling race-driven content, fans won’t come.” The results back him up: this was the second highest attended Daytona 500 event for the Sprint Experience in its eight-year history.

Insights vary greatly for all 10 sports. For the NBA, for instance, Octagon identified four types of fans that follow the sport, each for very different reasons. This makes it the least homogenous fan base in the U.S., which is a challenge if you’re a marketer trying to nail down an effective NBA activation strategy. NFL fans are also a diverse bunch because even though they have a favorite team, their passion is driven by the love of the game itself. Engaging NFL fans requires tapping into defining factors like participation and appreciation, since many Americans have grown up playing the sport in their communities, and going to high school and college games. Octagon explains that nothing is more important than the actual game, not even a specific player for NFL fans. In fact, it generally doesn’t matter who is playing—NFL fans just enjoy watching the sport, and that’s a crucial differentiation among its fans versus other sports fans. And it’s why Monday night football is so successful.

Camera manufacturer Canon taps into this deep-seated love of the game to engage NFL fans with programs that involve families and leverage their communities’ love for the sport. Leading up to the Super Bowl, Canon created the Why Do You Love Football photo contest with a division for adults and teens. It drew entries not only from dads, but moms as well.

“We found that the program was a great way to get women involved and leverage our NFL sponsorship relationship with moms, which are a very important audience for us, because it involves their kids which obviously is something they’re passionate about even if they’re not passionate about football,” explains Rob Altman, manager-camera marketing at Canon. Canon’s nearly eight-year sponsorship of the NFL has given the brand a chance to interact with a wide range of fans, but especially with families, which is one of its core customer targets.

To reinforce its family-friendly strategy, Canon used its NFL sponsorship to leverage one of the most iconic football dads of all time, Archie Manning, as its spokesperson. The father of both MVP football players Eli and Peyton couldn’t have been a more personal tie-in for moms and dads who watch their kids play football and like to take pictures of them engaging in the sport. “Having Archie Manning as our spokesperson was really terrific. People wanted to speak to him about what it was like to watch his sons play and that all ties in with what the average parent feels about watching their kid play football and taking pictures and wanting to remember those moments,” Altman adds.

Canon also extends its activations to local communities. In previous years it donated $150,000 worth of camera equipment to NFL Youth Education Town Centers that are set up in each Super Bowl host city. This year Canon maximized the donated equipment by starting a photo education program developed by Sports Illustrated photographer Peter Read Miller. Leading up to the Super Bowl, the children at the YET centers were challenged with taking football related photos throughout the year, and when the big game came around a winner from each of the 13 Centers was flown to the Super Bowl to shoot with professional photographers at the Super Bowl press conference.