Samsung, Qdoba and Mekhong Have the Secret – Event Marketer 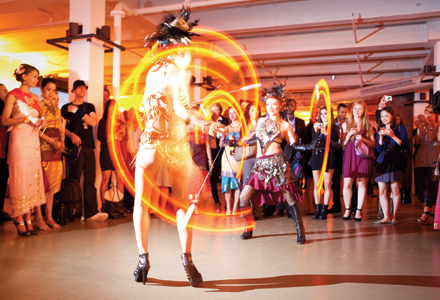 Samsung, Qdoba and Mekhong Have the Secret

Secrets are irresistible. It’s no surprise then that brands are using them to lure consumers to events. There are secret locations, secret build outs, secret celebrity appearances—you name it. But making sure a mysterious event is interesting enough to hook consumers is an art form that requires building the right amount of anticipation. Here’s a peek at how it’s done:

SAMSUNG
An air of intrigue is what made Samsung’s March 10 unveiling of its first-ever 3D LED TV in Times Square such a success. The brand skipped traditional pre-promotion and instead relied on consumers in and around Times Square to generate buzz for the “impromptu” event with their handhelds and cell phones. The gamble worked, resulting in 2.4 billion media impressions.

Leading up to the main event, a stage was built in the middle of Times Square, which piqued the curiosity of people walking by. Samsung took over five billboards, including the Nasdaq and Reuters screens that, 30 minutes before the event, switched from Samsung content on a loop to a countdown. At 7 p.m., James Cameron, director of the 3D hit movie “Avatar,” and the Black Eyed Peas jumped on stage. The buzz around the event showed that the secret setup had worked (Jack Morton Worldwide, Boston; Weber Shandwick Worldwide, New York City; CHI, New York City; Digitas, New York City; Starcom, New York City, handled).

Keeping it on the down low also worked for Mexican-inspired restaurant chain Qdoba and Thai spirits brand Mekhong. Both brands share their secrets for making their consumers curious enough to check out their events:

QDOBA
This summer, restaurant chain Qdoba served up mini beef and pork tacos out of a vehicle inspired by traditional Mexican taco trucks at various stops in Seattle where street food served from mobile trucks has gained popularity in the last year. Since Cinco de Mayo through mid-July (a fall round is in the works), the truck stopped at high-traffic areas, including June’s Seattle Pride Parade. Qdoba kept its locations secret and used Facebook and Twitter to announce them a couple of days before they arrived on site.

“We liked the idea of consumers guessing our next event location and also suggesting where we should go next,” Erin Knirk, West Coast marketing manager at Qdoba, says. “If we had gone ahead and listed all of our events in the beginning of the launch there wouldn’t have been that same engagement or intrigue. There would be no reason for them to keep holding on and engaging with us.”

When Qdoba first built its following on Facebook and Twitter, it didn’t tell its audience immediately that the street taco truck going around was theirs. “We didn’t say anything about Qdoba online so that people could ask ‘who is giving away free tacos?’ but by the third event we let the cat out of the bag on our social media sites,” Knirk says.

Hand-painted in sea foam blue and rust orange with vibrant bougainvillea flowers to add an authentic Mexican “mercado” feel to the truck, the experience extended around the vehicle with café style tables and chairs, a condiment counter, lighting (for night events) and music. In addition to a free taco, consumers received a coupon redeemable at Qdoba and a branded bracelet directing them to qdobastreettacos.com to enter to win a trip for two to Pescadero Surf Camp in Baja, Mexico (Beyond Traditional, Seattle, handled).

MEKHONG
Thailand’s Mekhong liquor brand lends itself perfectly to “secret” programs because it is innately exotic and mysterious. As part of its Ports of Call campaign in February it held influencer on-premise events in speakeasy-style bars, complete with unmarked doors and back alley locations. In March, the brand did it again by hosting a New York twist on the Thai tradition of honoring the full moon with a rooftop party showcasing renowned mixologist Orson Salicetti on Manhattan’s West Side overlooking the Hudson River. The objective was twofold: reward existing brand advocates and lure in new ones.
A week prior to the event, models dressed like Thai princesses rode rickshaws around the West Side inviting people to sample Mekhong cocktails at local bars. Consumers who won the princesses’ favor were given an invitation to go online and join the Ports of Call society for secret event information. Other teasers included stenciled messages on buildings in the Meatpacking district and on pedicabs to drive people to the event website (New York City-based Phase1 Marketing, handled).
But inviting people with enough advance notice and still maintaining an element of mystery can be challenging. It requires striking a balance between releasing just enough information beforehand–but not too much. “Always only put enough information out to hook your consumer in, make it personal, make it different, make it memorable, garner their interest and then feed them slowly a little at a time to reward them,” suggests Nicola Ball, program manager at Interbev, who handled the program. “The reward for a brand is long-term loyalty through building blocks for all future investment. In essence, creating a campaign that is intriguing is playing to a long game.”
Now, there’s advice worth drinking to. EM