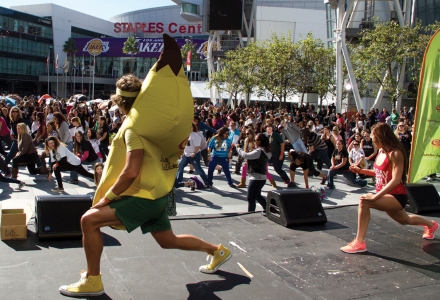 We’ve all been there—harried from holiday shopping or stressed out from standing in long lines outside a store or movie theater. Yes, we could use a hand, a drink, a little hospitality. This past November, three brands answered these “need states” with guerrilla tactics that touched consumers and touted their wares. The result was a win-win for the brand and the bedraggled.

Over Thanksgiving, Chevrolet offered Black Friday holiday shoppers outside of Macy’s stores in Boston, Chicago, Los Angeles and New York the chance to warm up inside its 2013 Malibu sedans and Traverse crossovers. While the shoppers took a load off their feet and checked out the interiors of the new cars, roving Chevrolet brand ambassadors held their spots in line until they returned, all relaxed and ready to tackle their shopping lists. Those waiting in line could enter a national sweepstakes using brand ambassadors’ portable tablet computers to win a car and a New York City shopping spree. Macy’s shoppers in Los Angeles scored an extra perk—they got a free ride to their car, then the driver loaded in their packages (Agency: Next Marketing, Atlanta).

MetroPCS, the no annual contract wireless provider, also took to the mall on Black Friday to promote its Black Friday phone sale and get the Galaxy S3 handset into peoples’ hands. Twelve teams of two to three brand ambassadors showed up in a branded vehicle featuring the new handset image. As they worked the line, they demoed the phone so consumers could experience the speed of its 4G LTE network and discussed rate plans and coverage areas. They handed out holiday cheat sheets with a space for a shopping list and the best Android apps for the holiday season, including coupons, recipe finders, GPS and shopping guides. They also distributed free survival kits containing Coke or Diet Coke and granola bars (Agency: Next Marketing, Atlanta).

“Buying a phone is like buying produce, you want to touch it and feel it,” says Mike Loverde, regional director of advertising and pr at MetroPCS. “We reached the deal seekers while they were seeking deals and customers when they needed something.”

The company also has converted an ice cream truck into a coffee and snack truck that heads to stores and interacts with customers. In the summer, it distributes ice cream. Loverde finds the tactic a successful one. The Black Friday effort reached an estimated 5,000 to 6,000 people and boosted Black Friday sales of the handset by 250 percent compared to the previous year’s event.

Three weeks earlier, Jamba Juice had introduced the limited-time Berry Bitten smoothie in its stores and distributed the slap bracelets free with the purchase of a drink. The brand also sponsored a sweepstakes on Facebook that awarded a grand prize trip for two to attend the film premiere.

“When we were considering the ‘Twilight’ saga, we started looking at their loyal and large fan base as well as ours,” says Julie Washington, cmo at Jamba Juice. “We knew they would have a large campout on multiple days, which was an opportunity for us. We are about a lifestyle.”

“It was an opportunity to introduce our brand to potential new fans of Jamba, not just to advertise but to experience it in a fun and personal way,” Washington says.

And whether you’re camping out on asphalt in a tent city, or stuck in a line snaking around the mall, you sure can use a little of that. EM