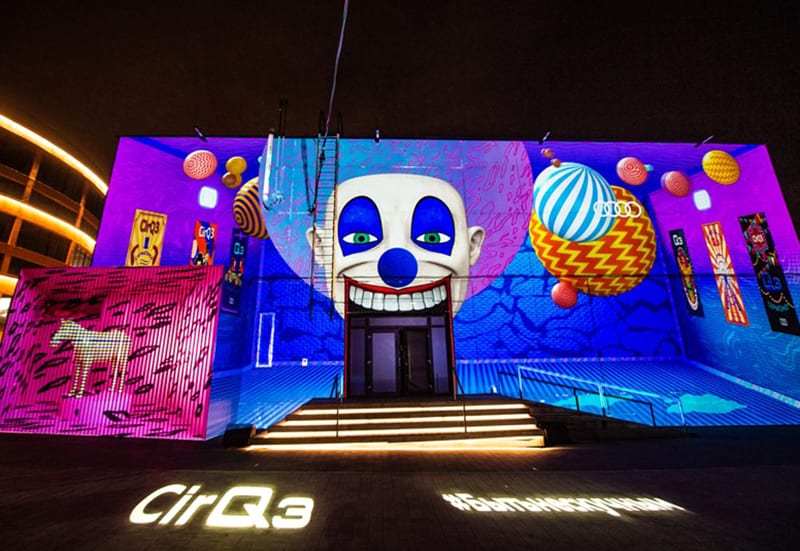 Automotive launch events are designed to dazzle audience members, often taking the shape of a stage presentation and flashy reveal moment, but Audi Russia flipped the standard format on its head to introduce its new compact SUV, the Q3. Straying from the typically buttoned-up auto launch, the brand transformed its event into a three-act circus, delivering a multisensory spectacle in Moscow that cleverly immersed attendees in the new vehicle’s design elements and tech features.

Dubbed CirQ3, the launch event was built to embody Audi Russia’s tagline for the vehicle, “Serious as Audi, Amusing as Q3,” a nod to the reliability of Audi vehicles fused with the SUV’s playful design elements. With that in mind, the automaker centered the CirQ3 experience on a single question: Seriously?

Upon approaching the event, attendees encountered hypnotic patterns and eccentric circus characters projection-mapped onto the façade of the venue, including a giant clown head that beckoned them inside. At coat check, guests traded their jackets for masks, helping catapult their immersion into the CirQ3 experience.

Next, attendees passed through a ribbon “portal” as a voice whispered “Seriously?” before arriving at the Playground, which served as the first circus “act.” The space was divided into three zones: a photo op, an encounter with candy girls dishing out typical circus treats and a fortune teller station where they could confront their fate.

The second act featured a larger-than-life magician’s hat surrounded by wall-sized LED screens. As attendees arrived, the lights went out and video content began playing, offering a closer look at the Q3’s key features. But it wasn’t your standard sizzle reel—familiar images were transformed by the appearance of the new vehicle (think: a traffic jam that turns into a herd of zebras). When the video ended, the magician’s hat was raised to reveal the Q3. From there, attendees were invited to explore two art installations—the Q3 presented as a leopard in a circus “cage” made of laser beams and the Q3 presented as a tiger poised to jump through a ring of fire. The third act included food and beverages, photo ops and a surprise performance by musician Yuri Antonov, complemented by costumed characters.

The entire event was live-streamed on Audi’s Instagram account (micro-influencers helped tease the broadcast), ultimately helping the brand earn more than half a million social impressions.

Describing a circus experience, of course, doesn’t do it justice, so take a spin through the gallery below to get a taste of Audi’s CirQ3 experience. Agency: Eventum Premo, Moscow.