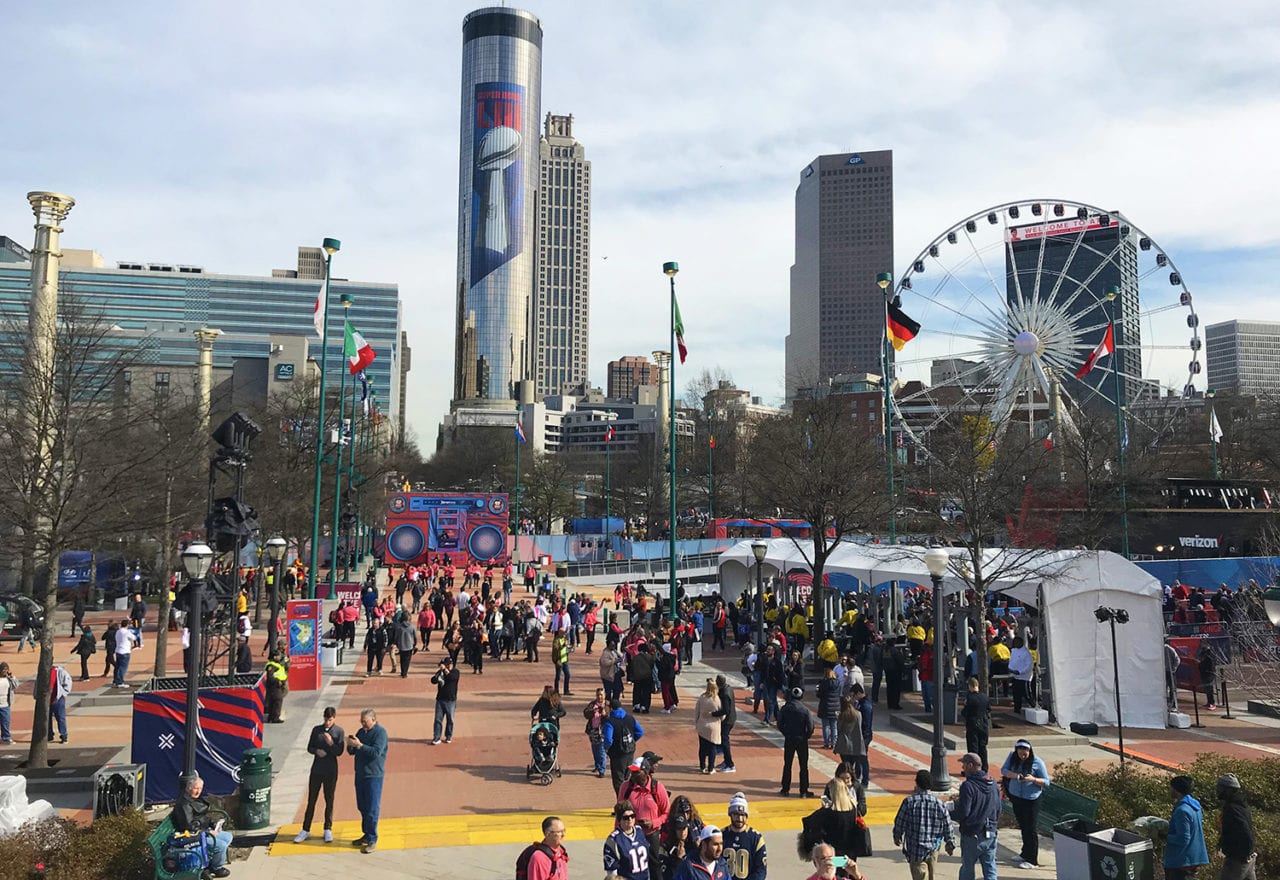 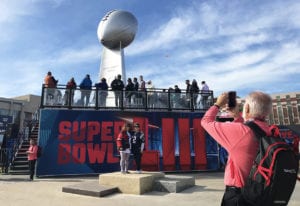 While some brands relied on their football fan activation mainstays, others this year for Super Bowl 53 delivered fresh showstoppers across the host city of Atlanta. The main fan experiences were centrally located at the Georgia World Congress Center adjacent to Mercedes-Benz Stadium—where the ticketed Super Bowl Experience by the NFL took place—and a couple blocks away, the Super Bowl LIVE Host Committee’s free festival took place at Centennial Olympic Park. Some of the most talked about and memorable brand experiences were not necessarily open to all fans, and took place in the greater Atlanta area. EM hit the ground to tackle it all.

Super Bowl LIVE featured approximately 12 activations from brands scattered about the park’s grounds. The Atlanta Super Bowl Host Committee reported at 7 p.m. on Saturday, Feb. 2, that Super Bowl LIVE was at capacity, with more than 25,000 fans on-site. The fans came out. And a few brands certainly delivered. 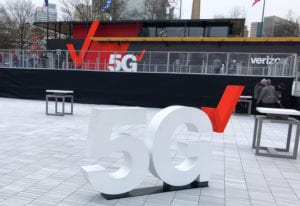 Verizon’s plaza offered space to gather and view activities in the park.

Not surprisingly, Verizon, the Super Bowl LIVE presenting sponsor, came out on top with a fresh build and an engagement strategy designed to be lengthy and in-depth. Consumers entered the footprint onto a plaza where they queued up, hung out around tall tables, and chatted with brand ambassadors with portfolios that compared Verizon against other major carriers. Once they registered, they entered the structure (built with stacked shipping crates) and played a football toss game wearing augmented reality goggles designed to demonstrate the lag time (more specifically, lack thereof) with Verizon’s 5G speed.

Next stop was a 4D virtual reality experience in pod chairs activated in partnership with Universal Studios and the “First Man” film about the first manned mission to the moon. The chairs swiveled, rocked and vibrated as we “blasted off into space” through our VR goggles. (It’s been a while since we enjoyed a VR experience as much as we did this one. No pixilation. No mind-altering content. Hats off. Or, make that goggles off.) 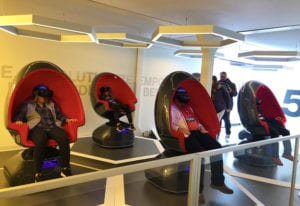 Consumers take a trip to the moon in a 4D VR experience.

Next stop was an infinity mirror room with an LED floor for Verizon’s 5G Home service, complete with the device and a reel of animations and trippy sounds. Then, consumers entered into a streaming zone, where they checked out a football game on devices powered with Verizon 5G. There was also cool signage that spelled out “Play” with fiber-optic threads that glowed red when sensing motion or touch. The experience ended with a mirrored tunnel surrounded with LED tubing that glowed white and red against the dark backdrop with 5G signage at the end of the tunnel. Oh, yes, an Instagrammable moment. To boot, there were player appearances and a second-floor space and outdoor deck for interviews, signings and VIP hangouts.

In addition to the activation, Verizon sponsored the Verizon Up Stage within the park, where there were live performances every day leading up to the big game. Verizon also deployed street teams as well as a mini electric vehicle where consumers could sign up for the Verizon Up rewards program.

“Each year, our Super Bowl activation is a reflection of our brand campaign and consistent with messaging consumers are seeing in the market,” says Rob Stecklow, associate director-sponsorship and events at Verizon. “This year we introduced Verizon 5G by opening four 5G Experience Labs across the U.S. So we built on the success of those 5G Labs, and made the one at Super Bowl bigger and better than ever before.” Agency: Momentum Worldwide; Build: Pinnacle Exhibits.

A mirrored, LED tunnel made for an Instagrammable moment. 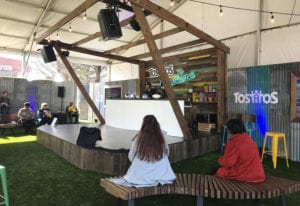 Tostitos brought back its Tostitos Cantina to the free fan experience where it earned plenty of crispy headlines for a “first-of-its-kind” 53-hour livestream of… drum roll, please… a bowl of Tostitos chips in the activation—chips that were enjoyed and refilled as needed as the hours went on. The goal, according to Tostitos: “To officially set the unofficial world record for the longest live stream of a tortilla chip bowl.”

“This might be the most exciting thing to hit the Super Bowl marketing scene in a decade, maybe ever… or maybe not at all,” Sheldon Boyea, senior director of marketing at Tostitos says in the release. We like it.

Fans could request various Tostitos flavors be added to the bowl by commenting on the live stream, and if 53 consumers commented with the hashtag #TostitosLiveBowl, the brand added the Tostitos Queso Blanco dip to the scene. Then, if the live stream received 53 million comments with that hashtag, the “53-millionth commenter” won 53 bags of Tostitos.

Comedian, actor and TV host Michael Yo ran play-by-plays of the event from a commentator desk within the space. On top of the live stream, Tostitos displayed digital spots on LED screens, sampled bags of chips and offered yard games like giant Jenga and cornhole. 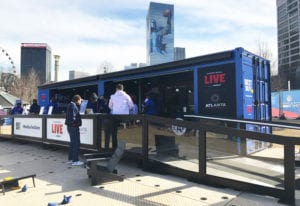 In an elongated, Best Buy blue shipping container, the electronics retailer offered the Best Buy Tech Zone with two home vignettes that contained products it’s currently selling that would interest sports fans. Helpful product specialists told consumers all about them. The goal was to help football fans who may be reevaluating their home entertainment set-ups. Each vignette was styled with home décor items, with the products in places they would be in that room of the home, and with product information stylishly burned into the surface next to them. A trivia contest completed the experience with prize giveaways. Agency: GMR Marketing. 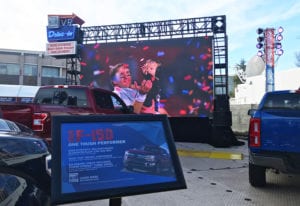 The Ford Built Tough VR Drive-in activation design was clever. A big LED screen rolled content and old-school marquee signage attached to it read: “Now Showing: Built Ford Tough Fan Journey.” Consumers entered into an enclosed registration zone where they took a quick survey on tablets and were given a ticket to attend the “drive-in” and a light-up LED bracelet for swag. They then entered the drive-in where Ford trucks were all facing the screen. With the help of a brand ambassador, they climbed into the seat of a vehicle, were handed a disposable hygiene mask for their face. Then, with goggles and headphones on, they experienced VR content that took them across the country in the vehicle they were sitting on. They could turn 360 degrees to check out the interior. The content was beautiful. A nice escape. Agency: Match Marketing Group.

Located in the Georgia World Congress Center, the NFL’s Super Bowl Experience offered fan activations geared toward kids and families, and an NFL shop. Take a spin through some of the brand experiences: 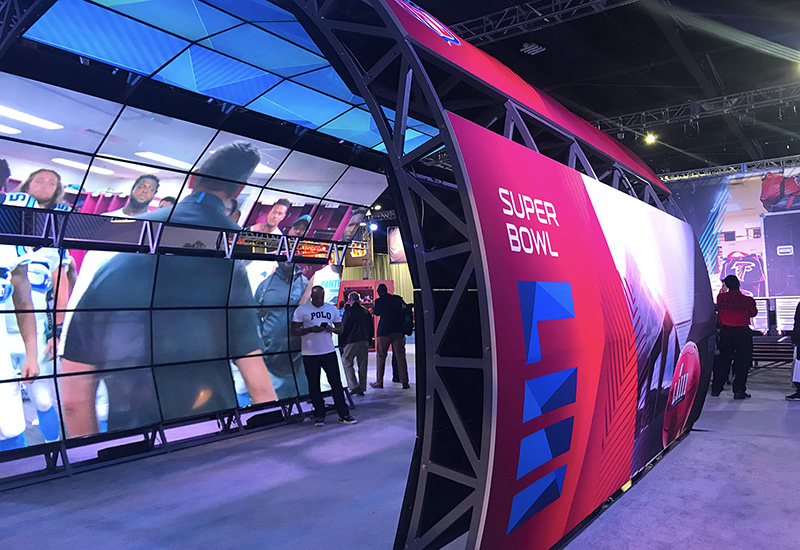 Take a tour of the Super Bowl Experience Driven by Hyundai:

North of downtown Atlanta in the Buckhead neighborhood, Budweiser created a stir with an appearance from the Budweiser Clydesdales, one of Anheuser-Busch’s iconic teams or “hitches” of horses, complete with the red, white and gold beer wagon, two drivers in their signature green suits and, of course, Barley the Dalmatian. This public experience was located in a large parking lot down the street from Fago’s Irish Pub, where Budweiser hosted a private afternoon event for executives and media to celebrate the game and preview the brand’s Super Bowl commercial spot. Agency: Weber Shandwick. 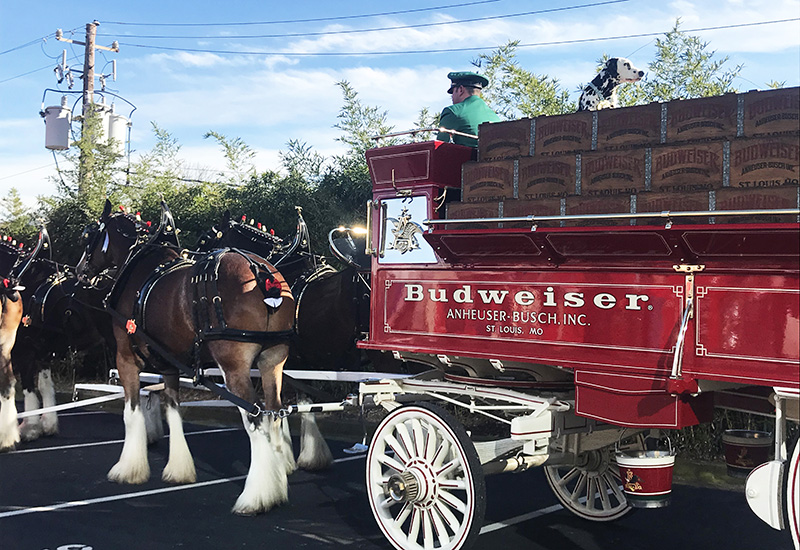 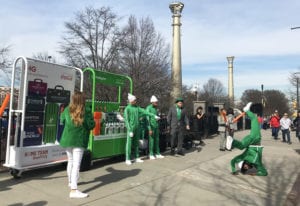 Holiday Inn broke it down on the streets of ATL.

Atlanta-based IHG Hotels & Resorts took on an ambitious, city-wide experiential program for Super Bowl with activations representing each of the brands in its portfolio. The programs, which took place Jan. 31 through Feb. 3, were centered on the messaging “True Hospitality” and #HomeTeamHospitality. To raise awareness for the activations throughout the city, street teams handed out special door hangers to drive traffic to the program microsite, and toted special IHG-branded luggage carts with custom branded luggage inspired by each of the program’s participating brands.

Among the experiences were two Orange IHG Hotels & Resorts-branded buses—one, a double-decker offering a traveling dj, a lively host and an Instagrammable backdrop; and the other, a coach bus that offered trivia and prizes. For its Holiday Inn Express property the brand activated a mobile Pancake Station (the property is known for its pancake stations) for late-night snacks as consumers passed through Atlantic Station. Then there was a projected football video game on the façade of the Crowne Plaza building in Midtown; a champagne tailgate for InterContinental Hotels & Resorts; a “not-so-tiny-door” photo op created by local artist Karen Anderson at Hotel Indigo; a Bloody Mary bar for Kimpton Hotels & Restaurants; and face painting and photo ops with Staybridge Suites ahead of the big game. Phew. And finally, in a partnership with Coca-Cola, the Holiday Inn brand sent out street teams for a “Share a Coke and a Smile” experience where teams with branded luggage carts, a portable speaker and a microphone engaged passersby. Break dancers lured consumers in to have them show off their skills. One lucky consumer even won tickets to the Super Bowl

“With the big game taking place in the same city as our corporate headquarters, we knew that IHG Hotels & Resorts needed to bring a dynamic campaign in to the Atlanta market,” says Emma Corcoran, vp-marketing at IHG. “Much like any big event in any city, dozens of brand activations and touchpoints were already in motion, so we decided to focus on experiential tactics to help drive awareness for IHG Hotels & Resorts and many of our individual hotel brands.” Agency: Geometry Global.

In true #HomeTeamHospitality style, we randomly surprised two fans with tickets to the BIG GAME TODAY! ? 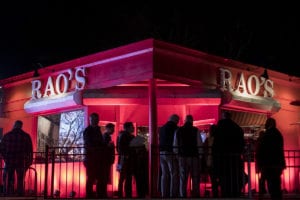 As if one was walking into the original Rao’s on 114th St. in East Harlem, New York City, the legendary and exclusive eatery (established in 1896) was recreated in Chamblee, GA, for Super Bowl LIII in a program with private aviation company Wheels Up. VIPs, special guests and talent were invited for pop-up dinners by Rao’s executive chef Dino Gatto over three nights leading up to the big game. Read more here. Agencies: Beachview Event Rentals & Design, Savannah, GA (production and build); Allied Productions (a/v); Momentum Worldwide (promotion).

Courtyard by Marriott, official hotel of the NFL, continued its tradition of giving fans the ultimate experience of being able to sleep over in the Super Bowl stadium ahead of the big game. Typically, the experience is won through a sweepstakes, but this year, the brand awarded the experience to Nick Pagliari of Kenosha, WI, a Marriott Bonvoy member who bid over three million points—the most ever on a Marriott Moment—to win the Ultimate Courtyard Super Bowl LIII Sleepover inside Mercedes-Benz Stadium on Jan. 31. Agency: IMG LIVE.

More from the Super Bowl Archives: