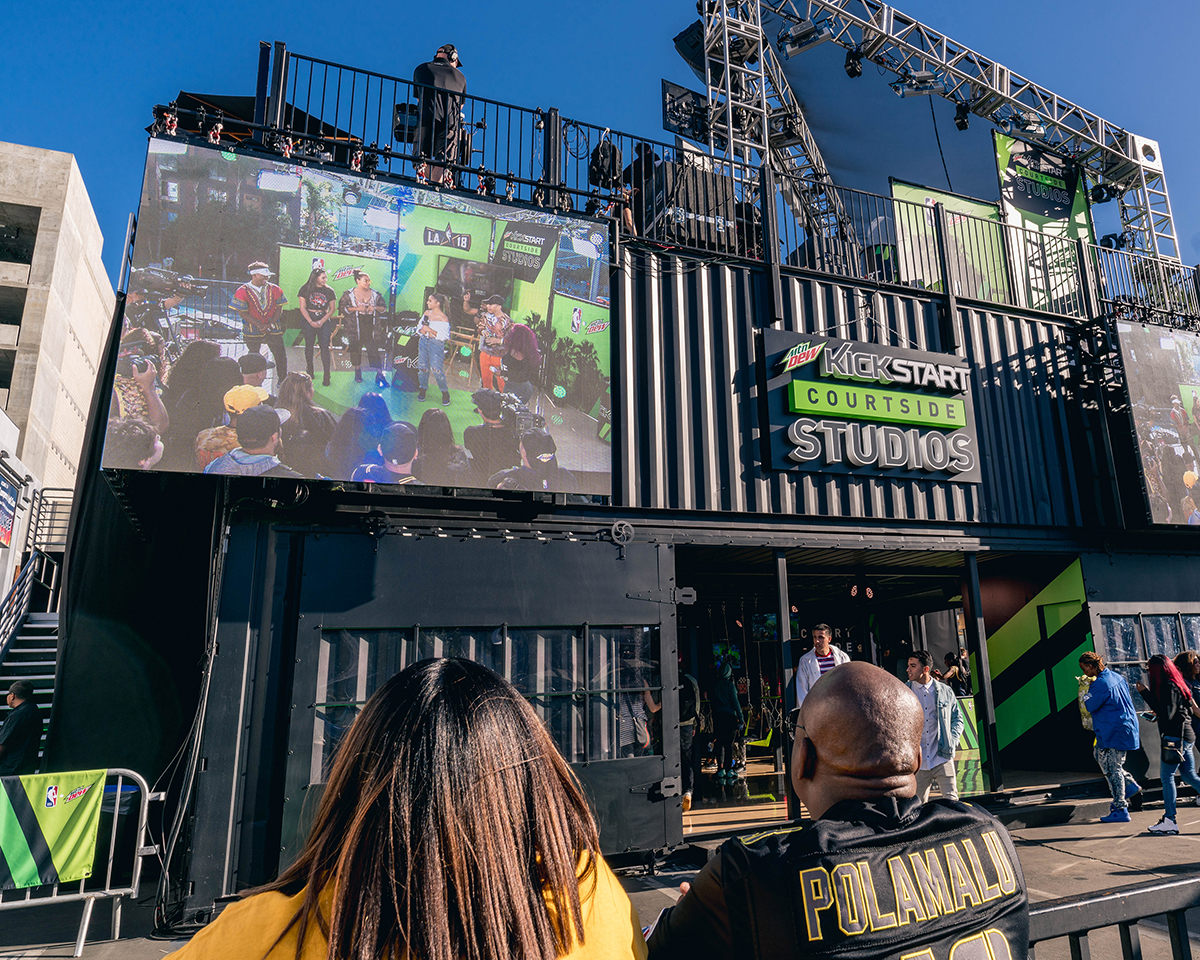 One might argue that NBA games are as much about who’s sitting courtside as they are about the live gameplay. That “courtside” piece of basketball culture inspired NBA sponsor Mtn Dew’s presence at NBA All-Star Weekend, Feb. 16-18, in Los Angeles, where it gave fans the kind of access to the game typically reserved for celebrities and influencers. Debuting its new campaign, Closer Than Courtside, the Mtn Dew Kickstart brand took over the corner of Pico Boulevard and South Figueroa Street with a three-story experiential venue dubbed Courtside Studios, located across the street from the Los Angeles Convention Center and a half block from Staples Center, along the main artery of the fan event.

Built with matte black shipping containers, each level of the experience gave fans access that became more VIP as they made their way to the top. On the first level, dubbed Studio 3, consumers took shots on a half-court that played host to competitions between players and served as an interview location. On a large LED screen in the back of the container, fans could watch everything happening in the rooftop broadcast studio, along with NBA action. (More on that rooftop in a moment.)

Fans could then belly up to a big bar for an ice-cold Kickstart beverage and sample the two new flavors launched that weekend—Original Dew and Ultra Original Dew. In the nearby Player’s Vault, they could have their can of Kickstart scanned for the chance to take home a piece of highly sought after gear and streetwear curated through StockX, a giveaway that tied into the basketball lifestyle and its fashion and sneaker culture.

Studio 2, the second level, offered the main attraction of the experience and highlighted the brand’s partnership with actor, comedian and basketball fanatic Kevin Hart. Fans could “audition” to be Hart’s “CourtsideSidekick” through a virtual interaction with his persona on a screen which went through a variety of pre-recorded prompts and questions for fans to respond to—responses which were then recorded as part of the contest. There was also a GIF booth that allowed fans to “sit courtside” and show off their courtside swagger.

Then came the top level, Studio 1, which was part variety show, part live broadcast, with a revolving door of guests and NBA stars like Kevin Love, Bradley Beal, and hosted by Hart, SafeWord’s Terrance J and King Bach all day Saturday of the event. For each segment, fans lined up on one side of the space to be part of the participatory audience. After each segment, new fans rotated in to be part of the live shoot.

If they couldn’t make it to the top, fans could still enjoy a piece of the action on the street-level courtyard outside the space where DJ Steph Floss and Mick performed throughout the event and the brand threw a culminating high-energy performance concert with TY Dolla $ign.

“The idea of Closer Than Courtside is all about the opportunity to give fans access to the game beyond the game, so we all see what happens on TV, we know who the top players are, what the scores are, but there’s a whole culture behind the game of basketball that goes beyond the court, whether you’re talking about lifestyle and sneaker culture, music or just bringing the personalities of the athletes to life,” says Chauncey Hamlett, senior director-marketing on the Mtn Dew brand at PepsiCo. “It’s key for us.”

Through mentions of Kickstart and through the partnership with Kevin Hart, the brand earned more than two billion impressions over NBA All-Star Weekend. The Courtside Studios experience itself drove more than 500 million impressions for the brand. Talk about a slam dunk. Agency: Motive, Denver. Build: Acme, Commerce, CA.