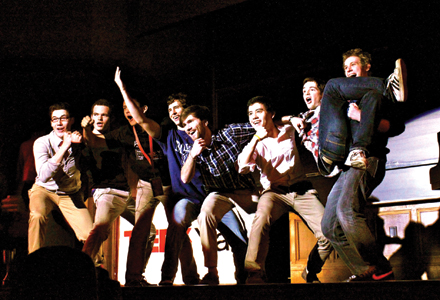 On a brisk winter day this February, 400 students, faculty, alumni and local community members converged on Yale University’s neo-gothic campus to experience the school’s first-ever TEDx event. Yale had been host to other TED-affiliated events, including a livestream of a TEDxWomen conference from the TEDGlobal event in Edinburgh, Scotland, and a Salon with a guest curator from TEDGlobal. But TEDxYale 2012 was the first official TEDx event on campus wholly planned and organized by two of its students, Diana Enriquez and Miles Grimshaw, both of the class of 2013. Here’s a play-by-play of the day, as captured by executive editor Jessica Heasley.

The Pre-Show
The one-day event kicked off at 9 a.m. when attendees were welcomed through the massive wooden doors of Sheffield-Sterling-Strathcona Hall (one of the oldest buildings on campus) and into a small hallway where they could check in and pick up their name badges. Each badge was a bright shade of “TED red” and included the attendee’s name, designation (press, alumnus, student) and two bits of personal information each attendee had submitted online when they applied to attend the event. Under the words “Talk to me about…” organizers printed the topics each attendee was interested in so other attendees could break the ice and network, and at the bottom of the badge were the words “I want to meet…” where TED organizers listed the names of two fellow attendees whose interests, based on their applications, aligned with yours. On the back of each badge was a short program overview.

Colorful posters lined the hallway leading into the main auditorium and featured fun factoids about the event’s attendees, like, “Number of people who want to talk about Music: 30” and “Percentage of our audience who uses Twitter: 23.” Large dots, dashes and lines were glued to the floors leading into the auditorium. We would later find out that this was a tie-in to TEDxYale’s video trailer, which was played at the beginning of the event, and paid homage to Samuel Morse, a Yale graduate and the inventor of the Morse Code.

Inside, attendees found their seats while staffers in TEDx and GANT co-branded t-shirts raced around snapping photos, chatting with fellow students and testing the A/V equipment. Clothing retailer GANT served as the “official event partner” and in exchange for its support, received a subtle display space to the left of the stage that featured antique trunks, stacks of neatly folded button down shirts and old trophies (TEDx rules prevent any sponsor from being on stage).

The stage featured a projection screen, simple stage lighting, some color effects to wash the backdrop in TED’s signature red hue and a homespun backlit TEDxYale sign that looked like it had been spray painted in a dorm room, but in a good way—it reinforced the consumer-generated spirit of the event.

The Content
The theme of the event was “A Twist of Fate” because, according to a statement by one of the event’s co-founders, in times of change, each speaker is “embracing new opportunities and developing groundbreaking work.” All of the speakers were Yale students, faculty or alumni and each spoke for the requisite 18 minutes.

The program was broken into four parts: Spark, Provoke, Redefine and Pioneer. Each of the segments featured between six and seven speakers who presented one after another, some with brief introductions or segues by the student organizers. The content was as wildly diverse as the student body. One Yale alumnus spoke about her personal experience of bucking the norm and home schooling her 11 children, several of whom went on to become Yale students. Next, a professor of astronomy and physics discussed her passion for dark matter and black holes. A current student then eloquently and movingly shared her life experiences growing up in Afghanistan. And another upbeat, and at times funny, presentation by two young alumni discussed the upside of watching their first business fail. Each presenter jumped right into their speech and instantly immersed attendees in the topic—no lengthy setups or boring slides. And each wove a heavy thread of personal insight and experience into the presentation, transforming a one-way PowerPoint deck into something more personal and accessible, and therefore, much more memorable.

A student speaker competition held earlier in the year invited students to vie for a speaking slot at the event and then gave all Yale students a chance to vote online for their favorites. The vetting process seemed to work because each of the student presentations were well practiced and in keeping with the more seasoned faculty and professional speakers on the roster.

The Overall Experience
Just like Morse’s dots and lines, TEDxYale 2012 delivered a clearly marked path back to TED’s simple mantra, “Ideas worth spreading,” and TED’s overarching vision for its TEDx platform—to be inspiring, reflective and inclusive of its local community. It drew its content, sponsors and speakers from the Yale community; shared a wide variety of interesting ideas that were not all academic or bookish, despite the venue; kept to the 18-minute format, for the most part (you know who you are, Business School guy who talked way too long); and kept things lively and engaging even when stomachs were grumbling for lunch. The format required your brain to always be in the “on” position and kept the crowd highly engaged. One session even wrapped up with a skit that turned into a glee club-style musical performance.

And at every step, the event gave a nod to local and school-affiliated innovators, like Samuel Morse. Even the event’s sponsor, GANT, was a New Haven-based entrepreneur who started in 1949 with one shop on campus and then went on to found a successful national retail brand.
I also appreciated the pre-event email that detailed how to get most out of the event. It reminded attendees to come early to network, stick around until the end, ignore your email for awhile and talk to strangers. As the organizers said at the beginning of the event, the most interesting person at the event may be sitting right beside you.