A two-year hiatus on one of the world’s most celebrated festivals finally came to a close last month as the Coachella Valley Music and Arts Festival made its grand return to Indio, CA, April 15-17 and 22-24. Months of pent-up energy was unleashed at the event, which notably dropped its mask and vaccine mandates, where thousands of fans gathered to catch performances by the likes of The Weekend, Billie Eilish and Megan Thee Stallion, and experience a range of large-scale art installations.

Naturally, the brands came back to play, too, and they enticed the influential crowd with everything from cryo-facials to video booths to live tattooing to curated cuisine (except in the case of Revolve, whose micro festival flopped this year). Absolut even created an activation in the metaverse to engage fans at home. And if the event was any indication of the health of the industry, things are looking up. In fact, the throngs of festivalgoers were reminiscent of pre-pandemic attendance numbers, with an estimated 750,000 people at this year’s show.

So which brands cut through the clutter? Grab a canned cocktail. Your tour of 11 steal-worthy activation strategies from Coachella’s IRL return begins now.

Absolut has been the official vodka partner of Coachella for 10 years and to celebrate the milestone, the brand developed a new-era experiential strategy that blurred the lines between its on-the-ground activation and metaverse destination, Absolut.Land, where attendees interacted as avatars.

Absolut.Land featured an array of touchpoints, from an Anti-Gravity Dance Floor featuring a virtual mosh pit, to a PRIDE Tunnel that paid homage to Absolut’s work supporting the LGBTQ+ community, to a Selfie Room inspired by its Born to Mix campaign that let attendees capture their one-of-a-kind experience and share it for a chance to win a Coachella NFT collectible. There were also surprise and delight moments and Easter eggs, like hidden collectible bottles, throughout the experience.

To boot, Absolut partnered with headliner Swedish House Mafia, dropping the group’s brand-new album on a custom jukebox within Absolut.Land. The album set the inspiration for the Absolut x Swedish House Mafia Paradise (Again) Paloma, a cocktail fans could find in the metaverse, on-site at the festival or at home with a specialty cocktail kit. Participants could not only grab a virtual drink, but also purchase cocktails to be delivered right to their door, powered by one of the Absolut.Land vending machines. Meanwhile, secret portals offered a few lucky users a chance to “teleport” to Palm Springs for the IRL festival during its second weekend. 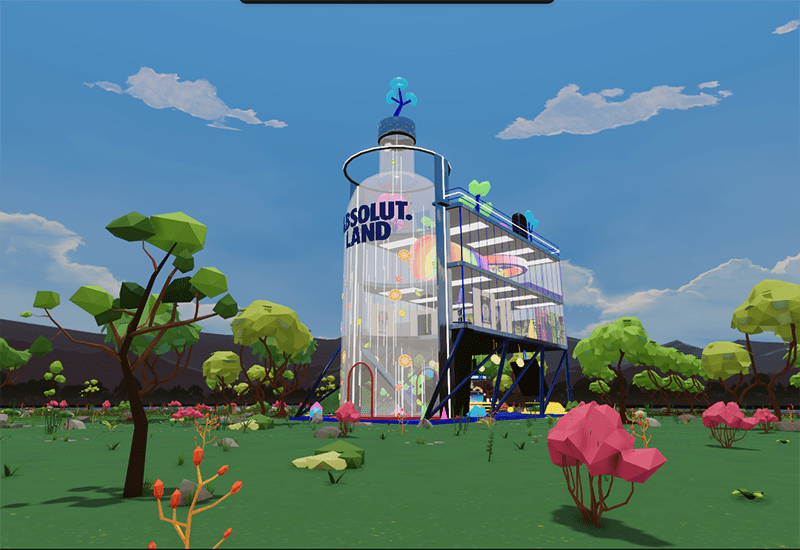 American Express returned to Coachella with a merchandise pop-up created in partnership with Bravado. The Amex Artist Shop was located within the brand’s luxurious lounge, and offered cardmembers access to exclusive, limited-edition festival apparel from top artists, including hoodies designed by Billie Eilish and Conan Gray. Cardmembers who couldn’t make it to the event could visit a microsite to purchase the merch.

Beyond the shop and access to its lounge, Amex offered cardmembers a complimentary ride on Coachella’s iconic Ferris wheel, a member-only hour at the SPECTRA tower and exclusive access to reserved tables at the Broad Street Oyster restaurant pop-up. Agencies: Momentum Worldwide (experiential); Day One Agency (p.r.). 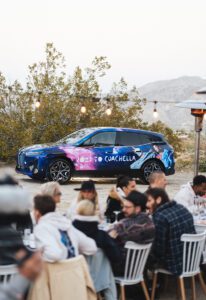 BMW’s Road to Coachella platform, which launched in 2017, once again featured a content creation journey documented by artist and influencer partners on their way to the event in a fleet of all-electric BMWs. The brand this year teamed up with festival performer and Grammy Award winner Doja Cat, whose album artwork for Planet Her was used to inspire custom wraps for BMW’s iX and i4 Road to Coachella fleet. The campaign also featured original content with exclusive behind-the-scenes looks at the artist’s personal trip to the show and performance rehearsals.

BMW also partnered with festival headliner Swedish House Mafia on an event at Zenyara, where it performed its first-ever Spotify livestream, and attendees could check out three custom-wrapped BMW iX models designed for each of the band members. The event additionally featured a display of the Doja Cat-wrapped iX complemented by a curated neon experience. Doja Cat herself stopped by to meet the BMW Road to Coachella influencer crew and shoot social content.

In addition to artists, the automaker worked with a diverse team of creators this year, who along their content-capture journey were offered accommodations in the Road to Coachella hotel. The property featured custom branding, framed images of past platform artists, gift bags, a pool takeover, an exclusive check-in with branded room keys and neon signage and décor throughout. Influencers were also invited to a curated dinner overlooking Palm Springs to kick off the first festival weekend. Agency: Mirrored Media.

Neon Carnival, this year sponsored by Levi’s and Liquid I.V., is an annual sponsor playground activated during the first weekend of Coachella. This year, once again, a slate of well-known brands engaged a roster of invite-only attendees. That included DirecTV, which took over the carnival’s VIP tent with a space-themed activation designed to be equal parts futuristic and retro. The brand invited influencers and celebrity partners to the desert to capture content from the space, with a focus on creators in the beauty and fashion, lifestyle, and reality TV sectors.

The VIPs in attendance could engage with multiple touchpoints, including a neon, jungle-themed lounge, a translucent portal that led to an amusement-park like entertainment destination, and a DirecTV geodome that was illuminated with projection-mapping sequences. Agency: Whalar (influencer and celebrity partnerships).

HBO Max hosted a Flight Attendant Preflight Lounge, its first-ever Coachella activation, during the first weekend of the festival at the Ace Hotel. The invite-only experience, which counted influencers like Olivia Culpo among attendees, was themed after the brand’s original dark comedy “The Flight Attendant.” Inspired by lead character Cassie’s wellness journey in season two, HBO offered curated wellness programming, treatments and activities to help attendees “fest better,” in addition to offering an inside look at the newest episodes. 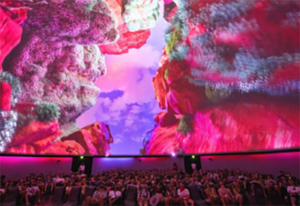 HP and its 360-degree Antarctic Dome environment were back at the festival this year to deliver an immersive projection experience and lounge and patio activations—all powered by HP products and accessories. For the dome immersion, the brand partnered with nine renowned digital artists to create a trippy “regeneration”-themed short film about HP’s ongoing sustainability efforts called “Regen,” scored by EDM duo ODESZA, who debuted their new album at the festival. More than 80,000 festivalgoers ultimately participated in the experience. Attendees could also step into the world of “Regen” with a green screen photo op powered by an OMEN by HP workstations and 120 cameras that yielded a 360-degree GIF, and stop by a Creation Lab where they could leverage HP editing tools to place themselves directly into scenes from the film.

Beyond the dome, HP offered shaded lounge areas where consumers could chill, refill their water bottles, catch demos, charge up their devices and check out an artist wall featuring the nine people whose work was featured in “Regen.” What’s more, an original (and record-setting) NFT auction captured the 3D film-viewing experience, with proceeds donated to the Arbor Day Foundation as part of the brand’s work to support reforestation. All told, HP deserved its own standing ovation, generating 12 billion impressions from its presence at the festival. Agency: Infinity Marketing Team.

Right on brand, Lay’s twisted the concept of glamping by erecting a series of “Potadomes” during both weekends of the event for its Fresh 4D experience. Inside the golden-hued structures, attendees who reserved a spot ahead of time were treated to a seated, four-course meal featuring Lay’s chips that were baked less than 24 hours beforehand and sourced from nearby farms. The Potadomes also included “Speakeasy Spuds” stations inspired by different music genres, a Crunch Studios space where attendees could play dj, a Golden Glow dome showcasing lighting synced to electronic music, and a Flavor Pop area where bold Lay’s flavors were paired with pop songs.

For those who didn’t snag a spot in the domes, Lay’s created a lounge and sampling room that popped up in other locations on the festival grounds where attendees could test out new chip flavors in 100 percent compostable packaging. According to the company, the activations mark the first time a CPG brand has had an experiential presence at Coachella.

It’s no secret that attendees tend to go hard at Coachella when it comes to imbibing, not to mention the sky-high desert temps, so it only makes sense that “healthy hydration” provider Liquid I.V. showed up with a House of Hydration tent featuring plenty of its electrolyte drink mix, digital integrations, a swing set photo op and a cotton candy aesthetic. Exclusive performances took place throughout the day, including by artists Jack Harlow and Saweetie, along with live dj sets by MAAD. (A couple weeks later, the brand brought the House of Hydration concept to the Stagecoach music festival, where it was renamed the Hydration Saloon.)

Liquid I.V. also had a presence at Neon Carnival, where it delivered a branded bumper car installation, along with a steady supply of its new cotton candy-flavored Hydration Multipliers, which help users hydrate two times faster than with water alone.

Another brand activating at Neon Carnival was Smirnoff, which created a custom 25-foot by 25-foot branded space inspired by its product packaging and designed to showcase Smirnoff Neon Lemonades. The centerpiece of the experience was a branded stoop designed to mimic a refrigerator. After opening the stoop’s illuminated door and selecting the seltzer of their choice, attendees were mysteriously passed a drink through the wall. They then had a chance to hit up a lemonade-themed booth that yielded personalized mini music videos they could post on social, leaving them with a sharable asset. Additional touchpoints included one bar that served two specialty cocktails and all Neon Lemonade flavors, and another bar set up to replicate a bus stop, also stocked with Smirnoff Neon Lemonades, and new Poco Pico Seltzer flavors. Agencies: NVE (creative); Hypno (video booth); Tractor Vision (fabrication).

As part of the brand’s efforts to fight food insecurity, the space featured a “What Do You Give A Crop About?” wall, which invited attendees to share the causes they care most about via stickers. Tattooed Chef donated $50 to Support & Feed for every sticker posted on the wall, ultimately raising $10,000. Rounding out the brand’s presence was a whimsical food trailer that served up vegan bites, like a 100 percent plant-based tiramisu. Agency: Duncan Channon.