BMW i Taps 15 Influencers for its Road to Coachella Campaign 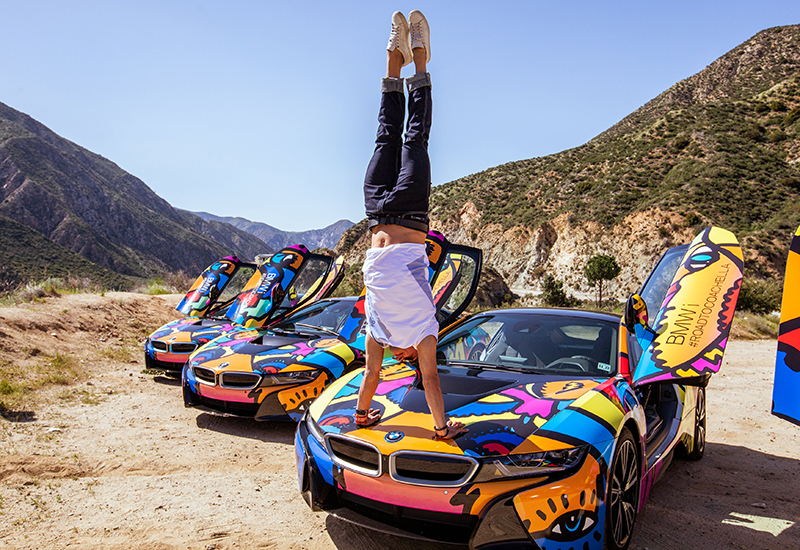 Road to Coachella: BMW i Sends 15 Influencers on a Content Creation Journey

Riding on the heels of its successful Road to Coachella campaign in 2017, BMW i put its show on the road once again this year to drive awareness of its i Series electric and hybrid vehicles, reach new audiences and engage the creative, passionate (and eco-friendly) demographic Coachella tends to attract. The brand’s presence reached far and wide, encompassing an artist partnership, a robust influencer program and two special events. It was the second year BMW i served as an official sponsor of the festival.

This year’s Road to Coachella program centered on BMW’s partnership with John Gourley, co-founder and lead singer of one of the festival’s most highly anticipated performing bands, Portugal. The Man, and an accomplished visual artist. Gourley was enlisted to create a one-of-a-kind design that was wrapped around each car in the BMW i Coachella fleet. The artist’s creative process, including the reveal of the wrapped vehicles, was documented on the brand’s social channels to give digital fans a taste of the action.

In addition to Gourley, BMW partnered with 15 influencers from around the world, including Kellan Lutz and Dorothy Wang, to share their own Road to Coachella journey in one of the custom-wrapped BMW i8s. The tastemakers documented their entire road trip, stopping at iconic locations along the way and, of course, sharing the content with millions of followers.

“There is perhaps no more quintessentially American experience than the road trip—your favorite music, a great car and the open road have always gone perfectly together,” says Tim Rittenhouse, experiential marketing manager at BMW of North America. “In the same way that a great song can trigger emotions, driving the ultimate driving machine can do the same. This emotional connection was the foundation for developing our Road to Coachella campaigns.”

The brand also teamed up with lifestyle company The h.wood Group to deliver two large-scale events that collectively drew 6,000 attendees: Poppy’s BMW i Powered Paradise and Poppy’s BMW i Recharge Oasis, both of which took place at a sprawling estate just outside the festival grounds. As guests arrived at each event, they were met with a fleet of the wrapped i Series vehicles, and invited to hop in for the first shareable moment of the night.

Other share-worthy engagements across the events included a neon art installation featuring a metal BMW i3 frame traced with neon flex lighting, a neon photo booth experience with the new BMW i8 Roadster that could be shared instantly, and a custom-wrapped claw machine game. Prizes in the machine included custom-designed bandanas created by Gourley, four of which also had a hidden key to a BMW i8. The four lucky winners who clawed their way to the coveted key earned an extended weekend test drive of the Roadster.

In addition to myriad photo ops, the events also included performances by Diplo, Travis Scott and Lil Wayne, to name a few, and attracted a host of celebrities including Rihanna, Gigi Hadid, The Weekend and Paris Hilton. Other touchpoints included the unveiling of Kylie Jenner’s new makeup collection, ‘KOURT X KYLIE,’ as well as the launch of Kendall Jenner’s Pizza Boys Radio program on Apple Music’s Beats 1.

“The second chapter of our Road to Coachella campaign really developed beyond our initial expectations,” says Rittenhouse. “Not only was John’s design unique and eye catching, throughout the week at Coachella we had the opportunity to work alongside some amazing celebrities and creators to capture and share their Coachella experience.” Agency: Mirrored Media, Santa Monica, CA.

Cruise Through Scenes From the Road to Coachella Campaign: