Our First-Person Review of an Airbnb Online Experience 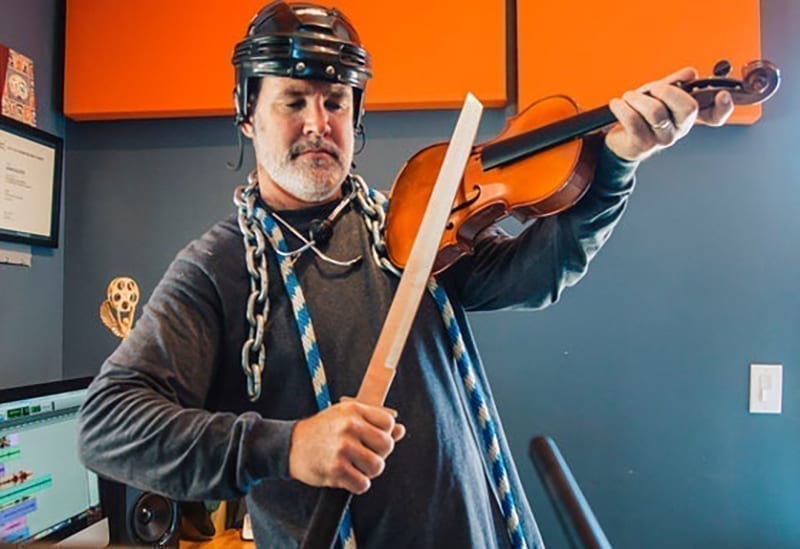 Our Editor Escapes Quarantine with an Airbnb Online Experience

If there’s a single thread that ties typical Airbnb travel experiences to the brand’s new digital offerings, it’s this: You never quite know what you’re getting into until you arrive. Such was the case when we signed up for a digital experience with Foley artist Adam DeCoster called “Secrets of Hollywood Sound FX,” one of the many classes available on Airbnb’s new Online Experiences platform. So what did we get ourselves into? Come along on a personal tour of our digital-first experience inside the art of reproduced sound.

First, let’s just say awkward scenarios often come to find us, and this is a case in point. Adjusting the angle of our laptop camera and signing on, we seemed to be the first to arrive at the digital class. By the time it officially started, it seemed we’d be the only ones arriving. Yep, in a class that holds up to 10 people, the experience rapidly became a one-on-one tutorial.

Fortunately, Adam, a four-time Emmy-nominated Foley artist, was warm and friendly from the get-go. He instantly made us feel welcome, and just as important, eager to learn from him. He explained the difference between sound FX and Foley (although Foley essentially falls under the Sound FX category), which are the sounds added toward the end of a movie or TV show, like clothes rustling or footsteps. We learned that while Foley artists work in moderately-sized studios, broader sound FX experts require more space and tend to recreate more dramatic sounds (think: explosions). Put it this way: A sound FX artist would recreate the sound of a car door slamming shut, while a Foley artist would recreate the sound of car keys jingling—because there’s no room in a Foley artist’s studio for a full-sized vehicle.

Next, Adam took us through various TV show scenes before the Foley had been added, and afterward, with quick insights on how it was done and why, in between. He seamlessly switched between the regular video screen and the footage many times, something that stood out about the Airbnb Online Experience (he also showcased the software he uses to layer sound onto a TV or film scene, which was surprisingly straightforward).

We watched and heard footage spanning everything from a SWAT team raiding a house to a fictional president shaking hands with a colleague and beyond. During the SWAT scene, Adam had us act out a line for one of the characters, then had us listen to the sound of her reproduced steps charging up the stairs (and yes, we’re ready for our Emmy). During the presidential scene, we found out that to mimic the sound of a handshake in Foley art, you tap an open palm once, then sort of swish your hand around it in a circle three times. We also quickly learned that Foley art is about reproducing a sound that people think they know, when in real life, it may sound quite different.

For his next trick, Adam gave us a tour of his home studio in Los Angeles, and walked us through how several of his props are used in Foley art. He also explained that the major studios he’s worked for, like Sony and Warner Bros., have basic Foley studios on-site, but that each Foley artist also carries a unique bag of goodies that he or she has collected over the years. Adam’s props ran the gamut, from big metal chains to old flip phones to musical instruments to a machete to an old taped-up camera, each with its own distinct sound and purpose. He also showed off a collection of very old shoes, including a battered old men’s loafer he uses to mimic the sound of women’s high heels. He even has to wear the shoe and tap it just right to create the proper sound.

Throughout the class, it became more and more apparent that Foley artists have the power to impact the intensity of a TV or film scene based on how they reproduce sounds and what they use to recreate them—but they hardly get the credit they deserve. Adam never exactly said as much, but he had a way of confirming it when we asked.

By the time we had briefly chatted a bit more and gone through our Q&A, the hour-long session was up, and it was time to be placed back IRL. We returned to reality armed with a newfound appreciation for a lesser-known art form and an overall sound experience.