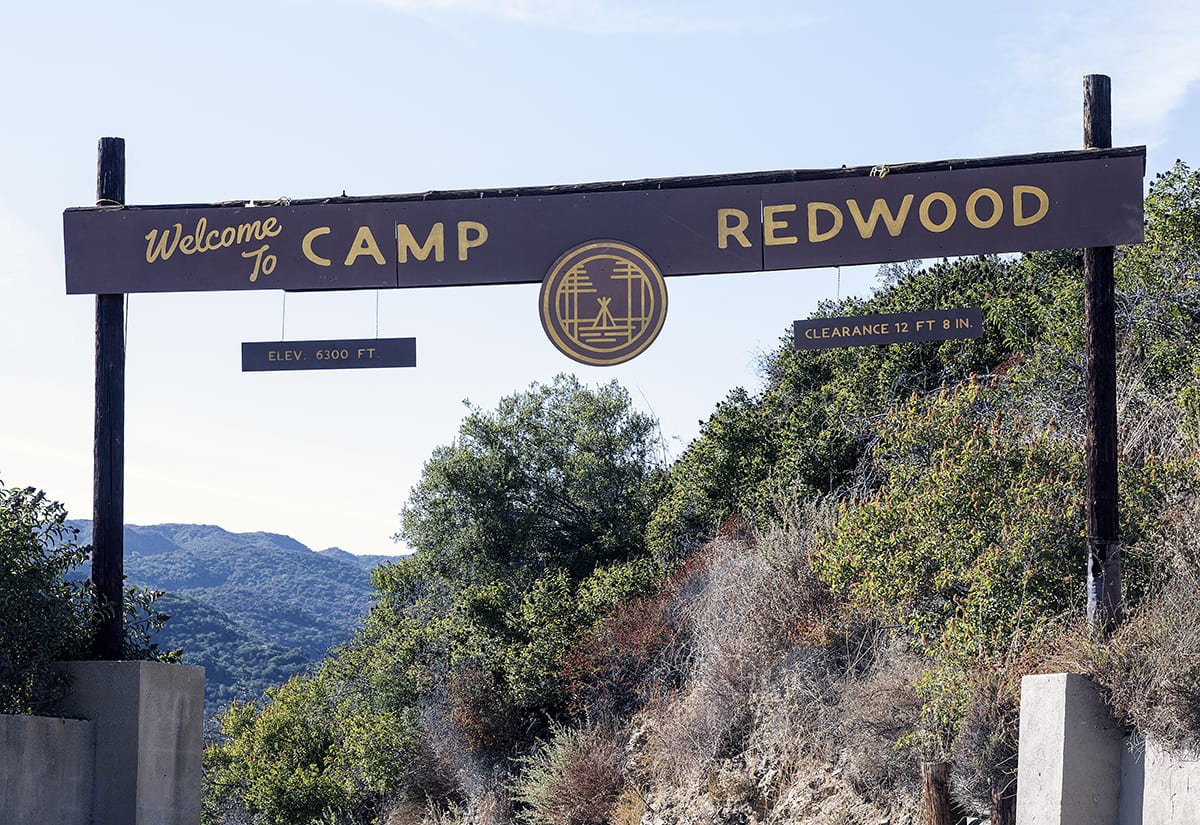 In its first-ever overnight activation, FX recreated the summer camp setting of “American Horror Story: 1984,” the series’ ninth season and homage to ’80s slasher-horror films, on a 110-acre property deep in the canyons of the Santa Monica Mountains. Dubbed “Camp Redwood,” the immersive theater-based experience took place, naturally, on Friday the 13th, a few days ahead of the series’ Sept. 18 premiere, and it featured a small group of influencers—20 horror tastemakers, superfans and sweepstakes winners.

“Every year ‘American Horror Story’ gives us a great opportunity to engage with the fans,” says Kenya Hardaway Green, svp-integrated promotions for FX Networks. “This event was an opportunity to connect some of the biggest fans of the series with key elements of ‘AHS:1984’ and get them excited about the show returning to air. And we knew in order to do that in a way that was going to excite them, and build some buzz leading into the premiere, we had to take them to camp.”

As the new anthology of “American Horror Story” opens, a small group of characters has decided to become counselors for the summer at the fictional Camp Redwood, but during initial tours of the camp the characters learn of its horrific history as the site of a massacre in 1970 committed by the camp’s groundskeeper. So, FX recreated this theme for the influencers, inviting them to Camp Redwood as counselors-in-training or CITs. 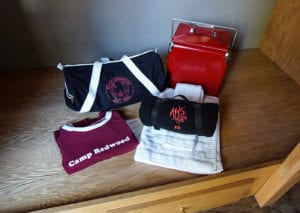 Superfans were provided all the essentials for an ’80s-inspired camp experience.

Ahead of the event, the invitees received a Camp Redwood welcome packet sent by the “Camp Registrar,” which included a welcome letter, camp rules, a guide and a map, and some puffy, ’80s-style stickers to decorate their Camp Redwood notebooks with. Attendees also received a recommended gear list with classic items to pack for an overnight, like bug repellent, sunscreen, pajamas and festive ’80s fashions to wear at dinner.

FX transported the attendees to the experience via Camp Redwood-branded vans—a 30-mile drive. During the drive, FX set the mood: attendees listened to tunes from 1984 on the radio while also digesting some disturbing and ominous information about the camp history and the van driver himself. Shiver.

Upon arrival, attendees were greeted by the camp director and staff and escorted to their cabins, each outfitted with bunk beds. They found canvas camp survival bags on their beds, complete with a flashlight, camp uniform, a whistle and night vision goggles. Each attendee then changed into their camp uniform, a ringer tee and knee-high tube socks, and made their way to camp orientation.

Next up were the activities, which attendees experienced in small groups. Keeping the groups on the smaller side was deliberate, according to Hardaway Green, and supported the brand’s scare-tactic strategy.

“We knew in order to make this feel like an authentic counselor-in-training experience we needed to keep it intimate,” she says. “That also gave us an opportunity to make it feel a bit like a true horror flick in which you have a small group of people out in the middle of nowhere. You start to feel more of the threat when there are fewer of you. There’s no safety in numbers.” 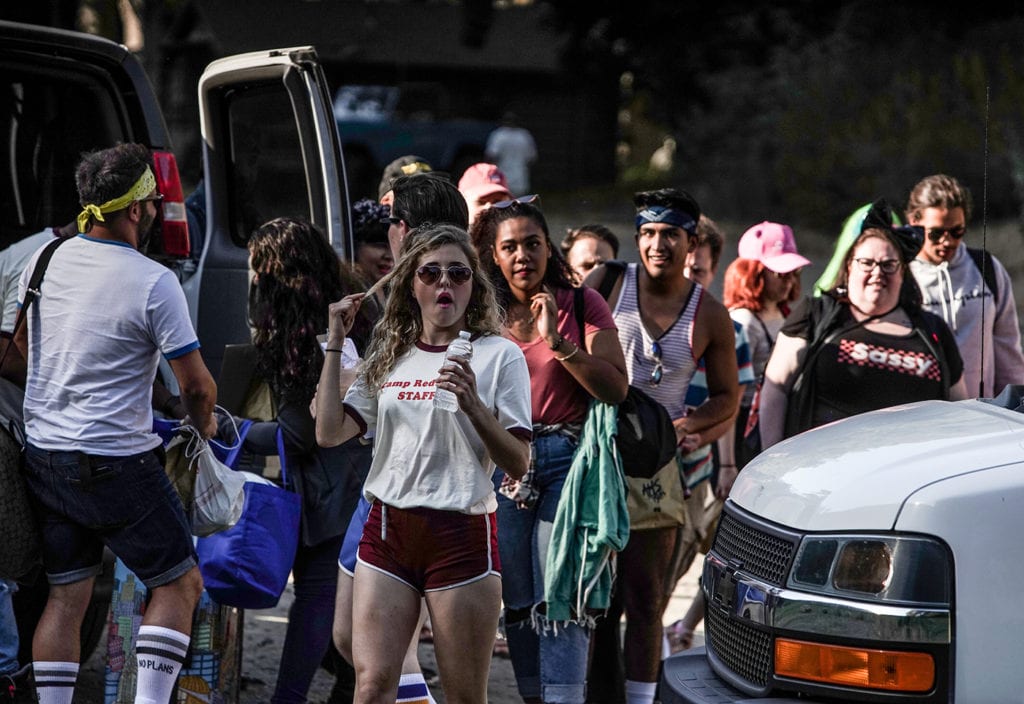 And that’s when the first scare burst onto the scene. While the group was participating in a jazzercise session, a bloodied hiker emerged from the mountains. They learned that he’d just escaped from a crazed man who tormented him and his fellow hikers. The CITs then took the hiker to the infirmary—a scene straight out of ‘AHS: 1984’—and let the camp nurse tend to his wounds.

Following the hiker moment, the CITs were told to rest in their cabins and prepare for dinner in the grand dining hall. They enjoyed a four-course meal of camp-inspired dishes—like a flaming jar of s’mores, mac and cheese and a specialty cocktail named Killer Kool-Aid—at a communal table with rustic wagon wheel chandeliers overhead. Wait staff and butchers wore leather carving masks and aprons. Toward the end of the meal, lights began to flicker, leading to a camp-wide blackout that forced guests to congregate around a fire pit and amphitheater while listening to eerie ghost stories and tales from the camp’s history.

In the meantime, buzz had been building about a particular attendee who had excused himself from dinner but failed to return. Then, the sudden sound of a tree creaking led the CITs to discover a wooded path that revealed (gasp!) the “dead” body of the missing CIT hanging from a limb of a nearby tree.

“We pulled a lot of what we did from the structure of a traditional slasher film,” Hardaway Green says. “You get to the point where you can recognize and identify and engage with everyone. You start to feel a level of comfort. We would introduce somebody and then extract them from the experience, much like a slasher film where people start to disappear one by one.” 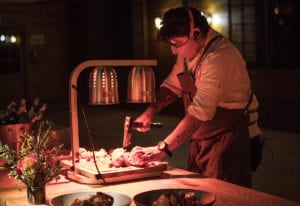 A creepy butcher prepared carved meats for the campers at dinner.

Moreover, the network was careful not to overwhelm the group with too many frightful moments, which would minimize the element of surprise.

“I think any time you’re dealing with an element of fear it’s best to not allow it to be revealed too often or too long,” says Hardaway Green. “We took that as a directive in everything that we built. Let’s make sure that we scare them with things in a time and place when it’s unexpected, make the frights quick, impactful, and then, where possible, pull them back,” she says.

Immersive theater played a key role in the experience. For instance, an actor portrayed the groundskeeper, who typically is someone to be suspicious of in a slasher film. Other characters befitting of ‘80s slasher horror were present, including a jock, an airhead, a clueless camp director—all archetypes that helped shape the scene.

Once the CITs’ nerves had settled, they were treated to a five-minute performance around the campfire from Grinder Girl, portrayed by dancer Alicia Dove, who grinded power tools against her metal outfit in a fiery show of sparks. Post-performance, guests could watch an ‘AHS’ episode marathon in the camp lodge area, play spooky ’80s board games including Ouija, Stay Alive and Outwit, and nosh on craft popcorn and campfire chili.

Throughout the course of the overnight, attendees were encouraged to post for their own audiences on social media using the hashtag #FXAmbassador and the show hashtag, #AHSFX. Come morning time, the FX crew paused the theatrics to inquire about attendees’ impressions and favorite moments of the experience, a move that signaled to guests that the event was winding down. But alas, the camaraderie and casual conversation was really a setup for one final fright.

As the vans pulled out of the campgrounds, attendees waved goodbye to a lone camp counselor who had sent them on their way. Then, seen in the vans’ rearview mirror was a chainsaw-wielding figure dressed in all black slowly approaching the counselor from behind as she waved and smiled to the departing guests. Agency: Industria Creative, New York.