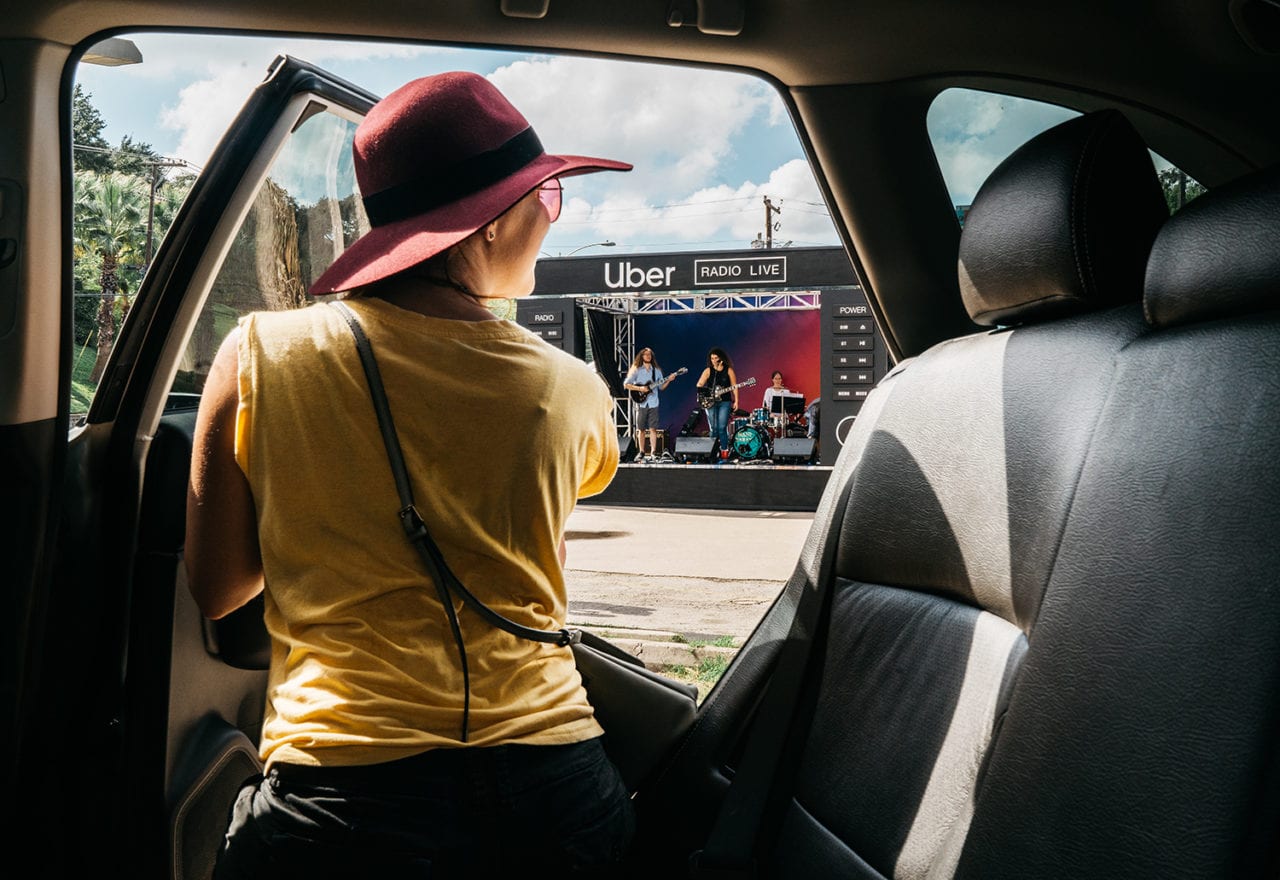 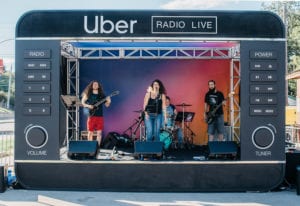 Local Uber drivers who were also musicians were invited to play their original music.

Festival attendees and passersby at Austin City Limits were invited to experience Uber Radio Live Oct. 5-7, an interactive music activation featuring live performances from local musicians who drive on the Uber platform as well as a live cover band that played songs chosen by the crowd. The goal was to produce an experience that celebrated the Austin market while connecting to consumers who fall under two categories of stakeholders: riders and drivers.

At Seattle-based music and arts festival Bumbershoot, the brand threw a secret show with dj Gryffin. At Lollapalooza in Chicago, it created a graffiti wall with social integration, and at Outside Lands, another secret show with Tycho was its gift to consumers. “Austin City Limits was the one we thought would really cut through the clutter and help us promote some of our new brand messaging that we rolled out with our brand refresh last month,” she says.

That messaging includes a new brand ethos: “Movement ignites opportunity.” Local Uber drivers who were also musicians were invited to play their original music before a crowd heading to Austin City Limits. Meanwhile, riders voted on which song an Austin-based cover band would play during the breaks between band performances. “The tie-in we wanted to emphasize to consumers is that Uber powers music experiences for people,” McNary says.

The four local bands that were chosen for the activation were discovered through Uber’s driver messaging app, which polled the driver community to find musicians who were interested in sharing their music with the brand. Diversity of genre and style was key—from electronic, R&B and rock—as well as accessibility online so that consumers could find and listen to the bands afterward if they so desired.

“It was a fun way to showcase the diversity of local music in Austin and to tell the stories of these local folks who drive on the Uber platform,” says McNary. Uber is also using video footage from the event to create artist interviews and performances to be shared on the Uber blog and additional digital platforms are in the works.

As for the rider experience, part of the festival strategy was to highlight the intimate connection riders often share with Uber drivers through music, whether through requesting to play a song or simply sparking conversation. “When you’re in a car headed somewhere, you always have this opportunity to connect with the driver, and there is an opportunity to connect specifically over music,” McNary says.

How it played out on-site in the activation: On “stage,” which was essentially the center of a giant set shaped like a car radio, the local band(s) featured for the day played original music for a set period of time. Then, intermittently, a cover band would play one of two songs that consumers voted on.

The crowdsourcing happened via an iPad survey, which Uber brand ambassadors passed out to people who were cruising the high foot-traffic area close to downtown Austin. Band battles, including Metallica versus Deftones and Odesza versus Børns, occurred every couple of songs so that voters would likely hear the winning track, announced by a dj using the all-too-familiar Uber phrase “Arriving now.” The dj also helped hype a sweepstakes from the brand which encouraged consumers to post a photo with the Uber Radio Live hashtag for a chance to win two VIP wristbands for the festival. Agency: Manifold, San Francisco.