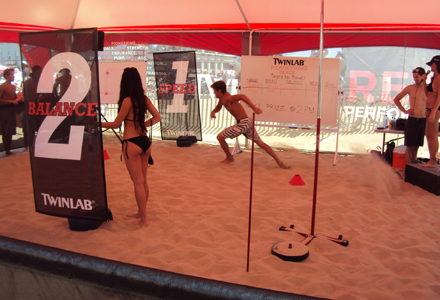 As part of a three-year sponsorship contract with the AVP, vitamin, mineral and bodybuilding supplement provider Twinlab has created a three-part experience at this summer’s AVP Nivea Pro Beach Volleyball Tournament that runs through September. One of Twinlab’s objectives is to have consumers try its product after an intense workout.

To facilitate that interaction, Twinlab is activating under a branded 30-by-30 tent called Performance Beach. Inside are three fitness activities that test attendees’ sprint speeds, balance and vertical jumping abilities. Male and female cumulative scores are posted on a leader board throughout the day; at the end of each hour, whoever is leading wins a bag of Twinlab’s 100 percent Whey Protein.

Data is collected when participants sign a waiver before participating in the activities, and afterwards participants are emailed a photo taken of them during the challenges to drive eyeballs to Twinlab’s website. Consumers waiting for their turn receive a branded protein shaker and are kept cool under the tent, which was created with extra material for that exact purpose. Next, participants move on to the Fueling Station where they can get a full protein shake inside their freebie shaker and learn more about the product.

“How often do you get to try out a shake after a workout? You could be walking on the street and get a sample, but you have no idea how it’s going to feel after you have done an activity,” Dean Stattmann, marketing coordinator at Twinlab, told Buzz, adding that he turned to Twinlab-sponsored AVP pro Mike Morrison for tips on how to make the activities as authentic to the AVP crowd as possible. “At our tents consumers are doing sprints, jumping and balancing—it’s competitive.”

The third tent, called the Institute of Abs, is a photo op where participants can enter a contest for the best abs; the pictures are uploaded to a microsite (similar to hotornot.com), and the winner will win a trip to Miami. Fit and product-knowledgeable brand ambassadors as well as a charismatic emcee keep the crowds coming. The events have sparked a lot of buzz on Facebook, and Twinlab plans to add Twitter announcements about participants’ performances in the coming weeks.