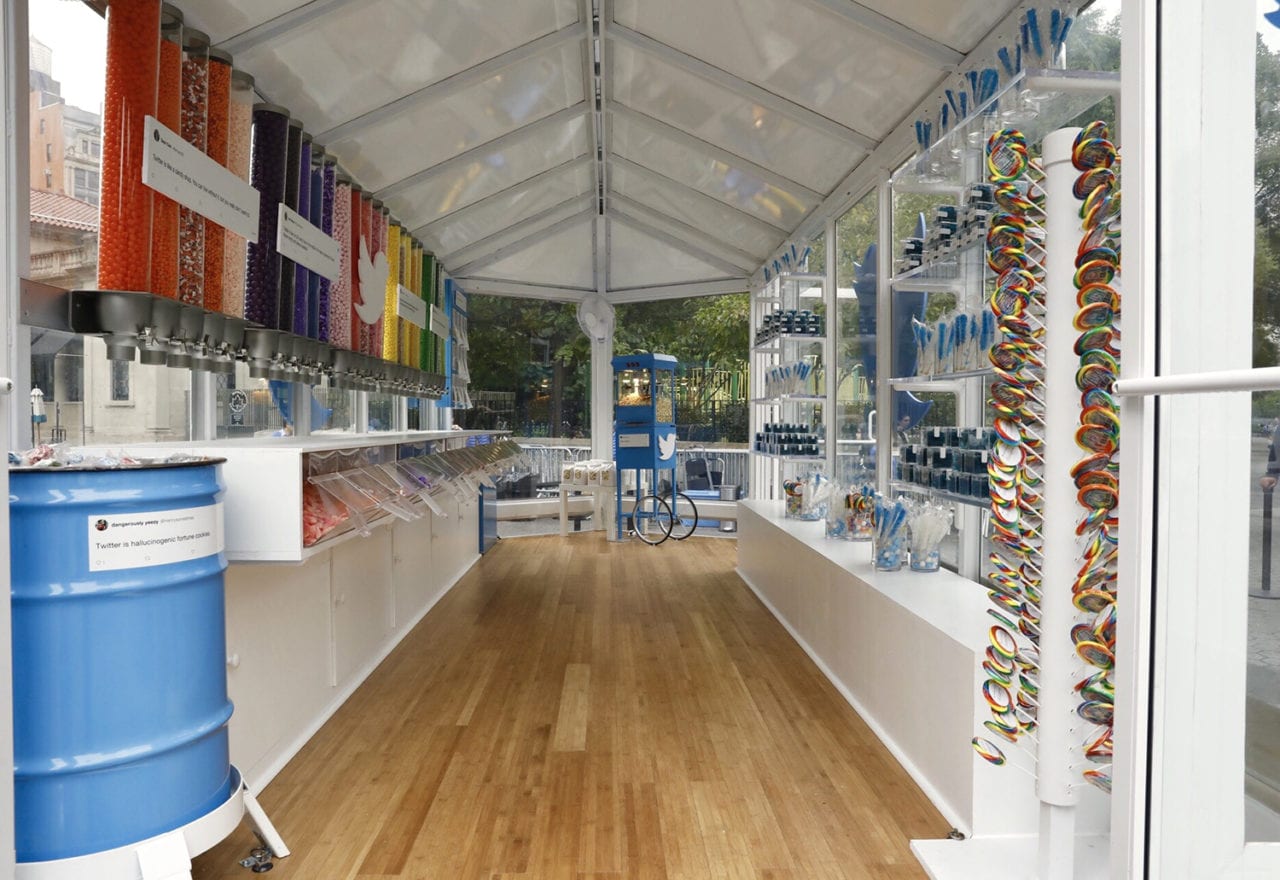 Commuters and residents of San Francisco and New York City may have noticed Twitter’s recent out-of-home campaign plastered all over subways stations, featuring real tweets surrounding the meme-friendly topic of “Me on Twitter.” In the tweets, users shared hilarious examples of how they’re able to be more themselves on Twitter than other social platforms, which call for a more polished and pristine look.

Fast forward to summer’s end, and the second iteration of the campaign has surfaced. The brand is again using real tweets, but this time they’re curated around what Twitter means to users. Part deux popped up again in both cities beginning Sept. 9 with new subway station advertising takeovers at New York City’s Union Station and San Francisco’s Powell Station, chalk stencils of tweets on sidewalks near the stations, mural placements in three New York neighborhoods and an experiential component: a branded pop-up candy shop adjacent to Union Square station.

The campaign represents a shift in the brand’s messaging, in that it has begun to speak directly to consumers. But at the same time, Twitter is letting users themselves define the brand. “We are celebrating the things that make Twitter unique—our conversations and our users that drive those conversations,” says Helen Stoddard, head of global events at Twitter. “The crux of this whole campaign is that the brand isn’t defining what Twitter is to our users; we’re letting our users tell us what that is. That point of view is critical for us to maintain the strong engagement of our core users who love Twitter and get them to love Twitter louder.”

When it came time for the brand to choose a surprise and delight component to supplement its “Twitter Is” initiative, the team noticed a theme: users were using terms and phrases like “sweet,” “yummy” and “candy for the mind” to describe the platform. And voilà—the idea for a candy shop was born. According to Stoddard, not only does it showcase what users themselves think about the brand, but also acts as a sounding board aimed at potential new users. “It provides a curious moment for people that maybe are not on Twitter, [who might ask] what’s happening over there, what are people doing, what are people talking about. Recognizing and celebrating our users in those conversations is critical and is where we’re going.”

The pop-up shop, a mobile trailer converted into a greenhouse-style candy store, offered passersby a variety of candies, each corresponding to user tweets. For instance, a tweet that read “Twitter is actually a lollipop that lasts forever” inspired a swirl lollipop station. Other candy, which attendees scooped into bags once inside the pop-up, included fortune cookies, popcorn rock candy, kettle corn, gummy bear cubes and a bulk candy station themed in Twitter’s brand colors. The brand doled out approximately half a ton of free candy in just six hours.

Nearby, tweets stenciled in chalk were placed strategically on sidewalks. One example: a tweet that read “Twitter is like the definition of drinking from a fire hose” stenciled near a fire extinguisher. In another instance, a user called Twitter “bananas rn,” so naturally, it was placed by a fruit stand. Agency: N/A Collective.

Get a Taste of Twitter’s Pop-up Candy Shop: