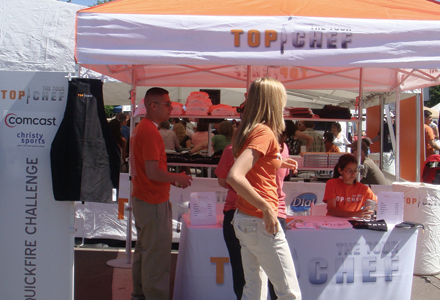 Farmers Markets are Ripe with Possibility

Farmers Markets are the place to be in the summertime—and in the spring and fall as well. Nothing quite compares to the aromas, colors, tastes and textures of fruits and veggies straight from the farm, a fact that is not lost on its patrons—foodies and would-be chefs who tend to be well-heeled as well as well-fed. But besides the farm-fresh tomatoes and cucumbers, homemade breads and jams and other local fare, farmers markets have become a social scene, as shoppers mingle and music fills the air. They’ve also become fertile ground for brand marketers who set up shop right alongside the farmers’ red pick-up trucks and tent-covered stalls.

These savvy marketers are tapping into a growing trend. According to the USDA, the number of farmers markets last year increased by 16 percent to more than 6,000 across the country, a fact not lost on brands such as “Top Chef,” which has activated events there since 2008, and The Cooking Channel, which brought an ice cream truck wrapped with images of berries and topped with an inflatable basket of raspberries to farmers markets this summer. Even the musical “Wicked” and car maker Mitsubishi made farmers markets part of their marketing plan.

For Mitsubishi, farmers markets are a “passion point” event along with 10K races, dog parks and mountain biking trails where it can interact with its core customers and illustrate how the brand complements their lifestyle. Consumers get to explore the cars firsthand, enter raffles, join its What Are You Into? campaign mailing list and schedule test drives at local dealerships, all of which tie into national activations, property sponsorships and an online effort (Agency: Legacy Marketing Partners, Chicago).

Stops at farmers markets as well as food and film festivals and other family-oriented events generated grassroots buzz for The Cooking Channel on its 15-city tour this summer, where through October it served up 3,000 samples daily of one-of-a-kind gourmet ice cream flavors. The strategy also helped differentiate the channel from competitors and allowed viewers to meet the talent and familiarize themselves with the new network (Agency: Oasis, Seattle).

Farmers markets are a priority venue for the Top Chef: The Tour mobile experience. “Farmers markets attract people interested in food who are at a certain level in terms of cooking and eating,” says Suzanne Park, senior director-consumer marketing at Bravo, which produces the show. “Farmers markets tend to draw the upscale audience that our Bravo viewers tend to be, so we know there is a good chance there will be overlap with our market.”

Another benefit: farmers markets allow for larger footprints which can accommodate the tour itself and the large truck that houses its equipment. “For practical, logistical reasons, farmers markets are also a good place to be,” she says.

Since 2008, when it traveled to 21 markets, the Top Chef: The Tour footprint has evolved, but the core experience is the same: two of the show’s former “chef-testants” appear at each location and, as they conduct four live cooking demos, talk about their experience on the show and take questions from the audience. The chefs fly in the day before the tour stop and purchase locally available foods, such as smoked trout in Denver, which they prepare and sample to the crowd.
This year the tour, housed in an orange mobile unit, included an open kitchen with tables that accommodated 38 people in a restaurant-like environment. A large screen on the back of the vehicle reached additional onlookers with a live feed from the kitchen. In between shows, attendees could play putt-putt golf or compete in a “quick-fire challenge” blind-folded scent test. Dial Nutraskin sponsored the activity area, which also included tables for local advertisers and a “Top Chef” mobile gift store.

“We were looking for the theater audience, people who buy theatrical production tickets,” says Dana Zell, marketing director for “Wicked,” San Francisco. “Our target demographic is women 25-54 with disposable income, and they are indeed shopping at farmers’ markets, especially in Northern California where local and organic food is a high priority. ‘Wicked’ is a very green show, as well, so going to a farmers’ market was a natural fit.”

But how do these high-end shoppers feel about the commercial intrusion into their green markets?

“We didn’t run into any problems; we have such brand awareness that people were excited to get free stuff from ‘Wicked,’” she says. “We were respectful of people’s space.”

“Top Chef’s” Park would agree. “People are receptive to it,” she says. “We’re a food brand and a show for food lovers, so it’s not a disconnect. Farmers markets organizers are very selective about who they allow to come in and we’ve had to jump hurdles, but at the end of the day they recognize that we bring them new attendees and increase traffic. It is the right audience for them, too.”  EM