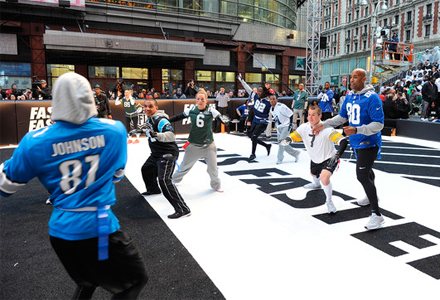 Nike on April 27 turned New York City’s Times Square into the Broadway Bowl, a full-on, truss-enclosed football field at Broadway and 42nd Street. The brand invited former NFL players, current athletes, cultural influencers, and officers of the NYPD and FDNY to play a 30-minute five-on-five flag football game, to build excitement around the draft and Nike’s new deal with the NFL to design the league’s official team uniforms.

The two teams, captained by Mark Sanchez of the NY Jets and Justin Tuck of the NY Giants, played for bragging rights and for the enjoyment of the hundreds of fans, passersby and special guests. The brand brought in students from New York City public schools and community centers and spent the day treating them like VIPs with exclusive performances by personalities like Jadakiss and Ace Hood. Nike also hosted autograph signings in select locations throughout the city to promote the new apparel lines tied to the uniforms. Inside the official NFL Shop at Draft pop-up store, Nike created a custom, premium locker room space that served as a dressing and prep area for the players in the game, as well as a lounge for families and friends. In the end Tuck’s team won 20 to nothing and took home the first Broadway Bowl trophy.

“We like to think of our football activations with a focus on training and we wanted to find a way to connect with the young people on that, too,” Brian Strong, senior communications manager at Nike North America, which handled the program, told Buzz. “The Bowl was an attempt to show our connection to the game in an authentic way and make sure the fans understand that we want to connect with them.” Agency: MKTG, New York City