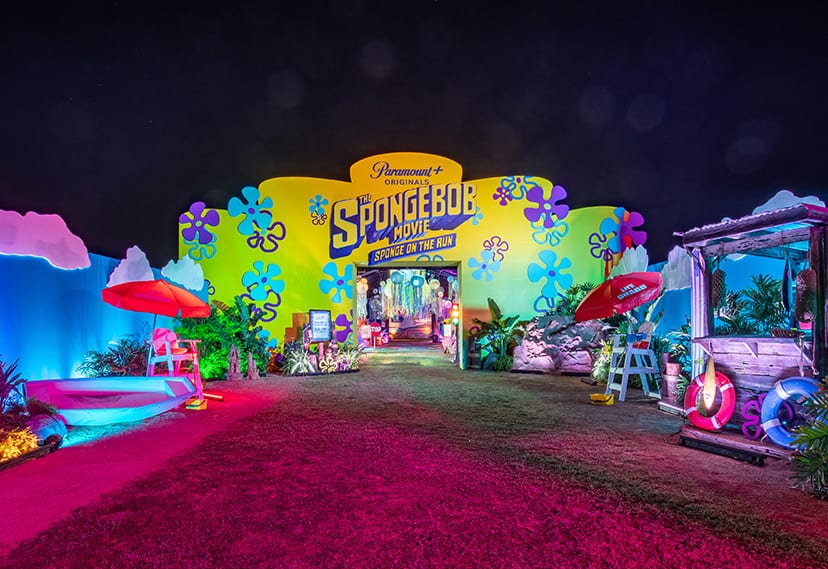 Drive-thrus for Kids: Paramount Plus Takes SpongeBob Fans ‘Under the Sea’

He lives in a pineapple under the sea, but for three days in February, you could catch beloved cartoon character SpongeBob SquarePants at the Rose Bowl in Pasadena, CA. Ahead of the premiere of “The SpongeBob Movie: Sponge on the Run” on Paramount+ (Paramount Plus), the streaming service executed an Under the Sea Road Trip Adventure drive-thru and screening activation designed to reignite fans’ love of the franchise through a physical experience enhanced by digital components. A minimum donation of $30 per ticket was required to attend, with 100 percent of proceeds going to environmental non-profit Heal the Bay.

Watch the Activation in Action:

“The drive-thru component elevated the whole event and differentiated the experience from other drive-ins in the market,” says Leslie Shair, director of events at Paramount+. “The framed tents allowed us to create a themed universe, transporting SpongeBob fans in their cars from a sandy beach to Bikini Bottom… Every detail was thoughtfully designed to further immerse kids in the SpongeBob universe, all while making sure the event remained parent-approved and COVID-safe.”

A select song from the film soundtrack layered with environmental sounds was included in each scene along the journey to further bring the environments to life. Digital engagements also played a role, from the use of QR codes to smart phone-enabled augmented reality photo ops, filters and themed games. Among tech-enhanced touchpoints were a photo moment that digitally transported attendees’ cars underwater, an opportunity to virtually interact with SpongeBob and snap a photo with his AR hologram and a chance for attendees to watch jellyfish swim across their phones as they drove through the Jellyfish Fields.

Check out More Scenes from the drive-thru: