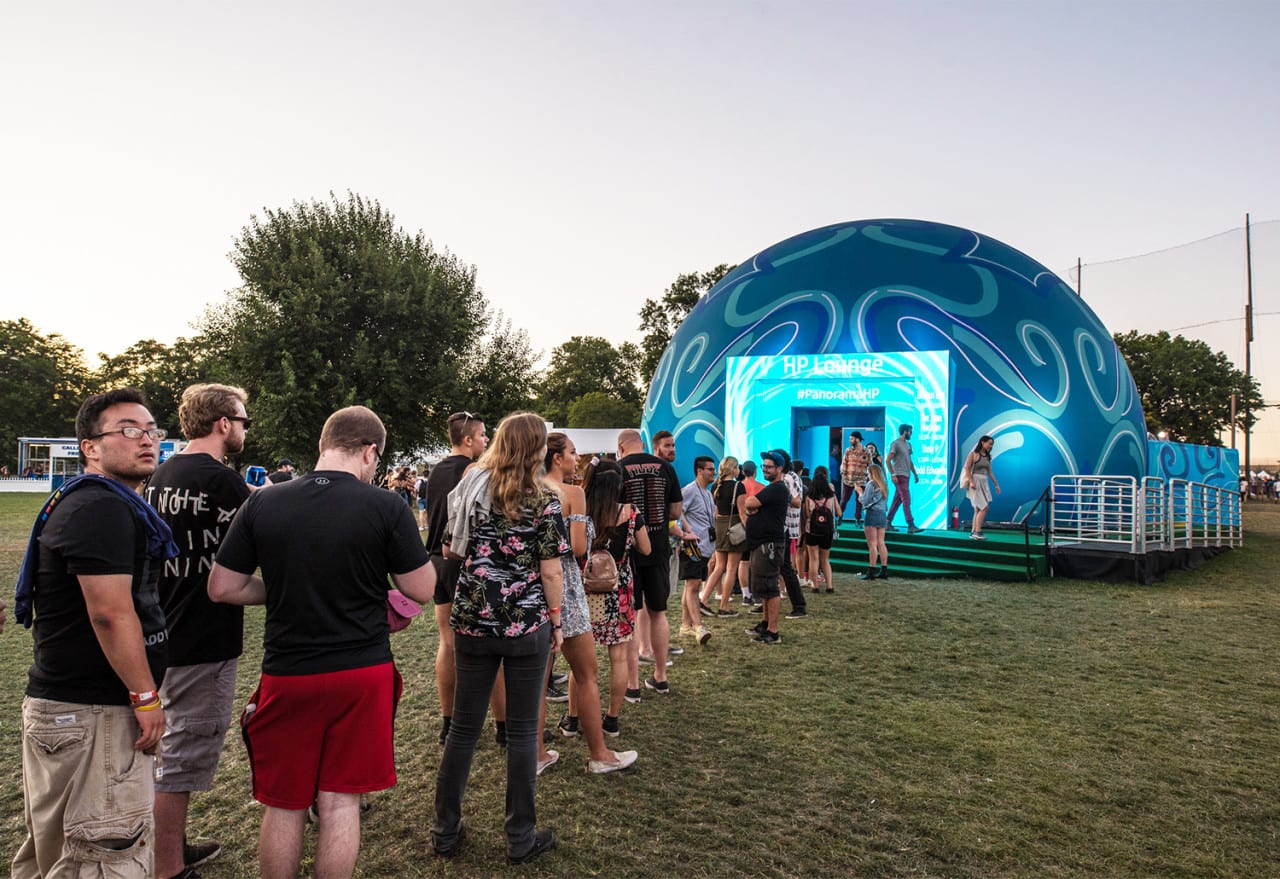 HP for a second summer went after the digitally savvy audiences at Panorama Music Festival, this year July 28-30 on Randalls Island Park in New York City, integrating its products into two high-tech experiences for attendees on-site. The first, The Lab, where nearly 200 HP products and accessories powered hands-on exhibitions by local artists handpicked by HP, and the second, the HP Lounge, a multisensory demo and chill space for attendees to escape the summer elements. HP’s experiential principles of “creating,” “reinventing” and “sharing” first came to life at AEG’s inaugural Panorama Festival last summer and at Coachella in April.

“Last year the dome was really popular, and so we said this year, let’s make it bigger and more exciting, let’s put in comfortable chairs to fit 250 people, make it more impactful, and let’s go bigger with the lounge and create some cool experiences for festivalgoers to interact with HP technology in unique and authentic ways,” says Lisa Baker, senior director-U.S. marketing for personal systems, at HP.

This year’s Lab experience featured nine artists that leveraged HP products to bring to life a series of interactive installations (META.is, New York City, handled). These included Heartfelt, by Ekene Ijeoma, an experience that “moved rhythms and vibrations of light and sound through people’s bodies,” creating a human circuit. When consumers touched the conductive rods while touching each other, electricity flowed through them, turning the lights on inside a series of boxes overhead. HP activated an installation called Tesseract, where consumers were invited to step into a “world of light and color,” with colors and patterns formed by LED lights and customized using HP’s inking technology. Consumers created their own patterns before entering the mirrored room to experience their custom 20-second light show. The experience showcased HP’s Spectre x2s and Omen Laptop devices. “One of the secondary outcomes for us by working with these local artists is now we have a new tribe of HP advocates out there, supporting the brand,” Baker says.

Once again, The Lab offered a 360-degree, projection-mapped experience outside on the dome powered by HP Workstations and Omen X. And on the inside, a theater experience called “The Ark” displayed 20 minutes of original content on the curved surface created on HP workstations for attendees lounging in bean bag seating below. Each multimedia experience closed with animated HP and Intel logos, followed by copy referencing the artist collaborations created on HP Workstations, driving home what was made possible by HP innovations.

Moving over to the HP Lounge, nearly 50 HP products and accessories powered activations from a bandana inking station to a kinetic art experience that combined bullet-time photography, light artists and Spectre and EliteBook x360s to offer an original “photo experience” and GIF file. Each kinetic image was emailed to the consumer with a call to action to post it with #PanoramaHP to be eligible for festival upgrades and prizes. In addition, a “light ink” effect allowed consumers to “draw” and see their doodles projected onto the ceiling surface of the secondary domed structure—1,824 consumers registered for and took part in this experience. Ten influential djs spun beats from an HP ZBook throughout the weekend.

HP recorded every demo on the machines that took place in the lounge, and collected data via registrations for the stations inside. Overall, more than 9,000 Panorama attendees experienced the HP Lounge and festivalgoers waited up to 45 minutes for an opportunity to engage in the activations inside. Nearly 30,400 attendees experienced The Lab. Inside the Lounge, dwell time averaged 33 minutes; in The Lab, it averaged 56 minutes.

“Measuring engagements and video completions and all of that was important, but one of the things we learned from last year is with the objective of advancing the HP brand and advancing consideration and presence, we didn’t have a real way to measure if we were moving the needle on brand preference and purchase intent, and so we conducted a pre- and post-event survey at Coachella and then at Panorama, and measured how influential the experience was,” Baker says. “We learned at Coachella that almost all of the key brand metrics we were measuring against were significantly impacted by attendees who experienced the different activations and in some cases, we saw double-digit shifts. It’s just another way to measure the investments that we’re making in these types of festivals.” Agency: Infinity Marketing Team, Culver City, CA.

• HP Invites Millennials to Create, Reinvent and Share at Coachella
• How HP Turned Demos into Journeys at Panorama Festival