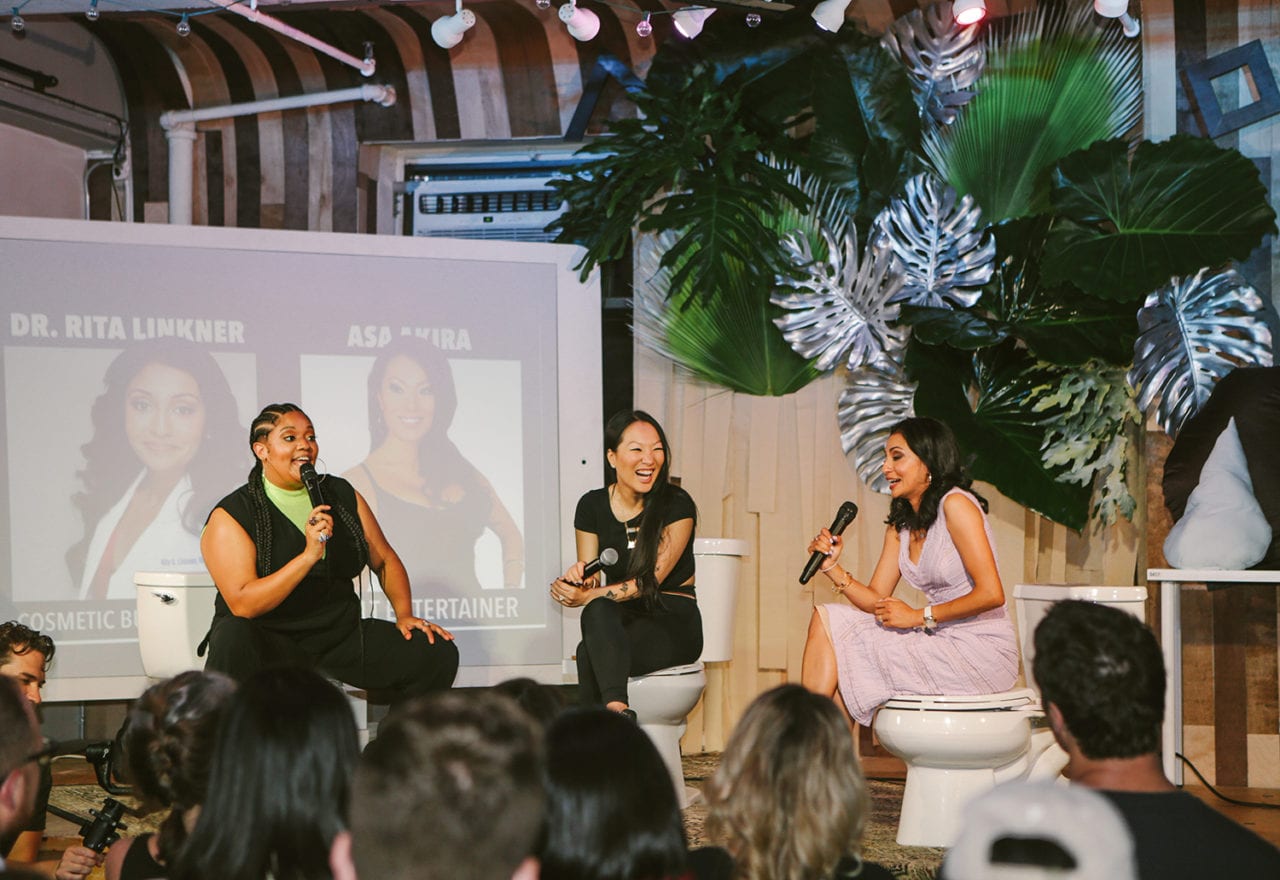 Fan conventions are one of the oldest event types, dating back to the 1930s. Traditionally, they have revolved around pop culture topics, like movies, television, books, or genres like anime or science fiction. High-profile fan conventions like San Diego Comic-Con and Lucca Comics and Games attract hundreds of thousands of attendees each year. But a new breed of fan convention is capitalizing on and creating communities around taboo topics, body positivity, guilty pleasures and even entire decades. Here’s a look at four conventions making headlines.

No butts about it, dear readers, this happened. In what can only be described as the poop emoji on steroids, bidet brand Tushy flushed away all taboos related to its product and use-case scenarios by creating a convention described as “a holey experience for like-behinded individuals.” We’ll stop with the puns there, but the event offered a comprehensive bathroom-focused experience with speakers including a colonic expert and a fitness guru, a workshop by a plumbing company and a handful of endemic brand activations (think: supplement sampling).

Hallmark Christmas movies up until recently were regarded as a guilty pleasure and often viewed behind closed doors. But through the power of today’s fan communities, Hallmark-movie-loving viewers are banning together, proudly wearing branded merchandise and even creating events. This year, Nov. 8-10, cheesy-Christmas-movie-loving consumers descended upon the New Jersey Convention and Expo Center for Christmas Con to meet Christmas movie stars, like Lacey Chabert, Jonathan Bennett, Melissa Joan Hart and Jack Wagner. There was an appearance by Santa Claus himself, as well as Jacks and Shawl, stars of the podcast, “Hallmark Channels’ Bubbly Sesh.” There was a traditional tree lighting, Christmas Trivia, an Ugly Sweater Showdown, Gingerbread wars, and a concert by Alicia Witt, to boot.

Historically, fashion brands have not always understood or even recognized the unique needs and desires of women who wear plus-size fashion, so for the past five years, subscription-based plus brand Dia&Co has activated The CurvyCon during New York Fashion Week, an event that celebrates and promotes body inclusivity. This year the event attracted more than 1,000 attendees and more than two dozen sponsors, including brands that offer plus-size fashion and/or feature plus-size models. Experiences included a workout party presented by Nike, a Target fashion show and shopping event, a panel featuring The Knot and Kleinfeld, as well as a Macy’s fashion show, a cocktail party by Anthropologie, panels, fireside chats, keynotes, workshops and performances.

Nostalgia marketing is trending in the experiential space, but if you or someone you know spent their prime years in the 1980s, then nostalgia ain’t just a trend. It’s a state of mind. In September, Nerd Mafia launched NostalgiaCon at the Anaheim Convention Center, an ’80s cosplay pop culture convention where attendees can bathe in the glory of all that the decade gave birth to (“Back to the Future,” Madonna, Hulk Hogan, Garbage Pail Kids, you get the idea). The event  featured exhibitors, an ’80s car collection, a boombox museum, a cast of entertainment experts and speakers, as well as appearances by celebrities like Christopher Lloyd and Corey Feldman. Rad.