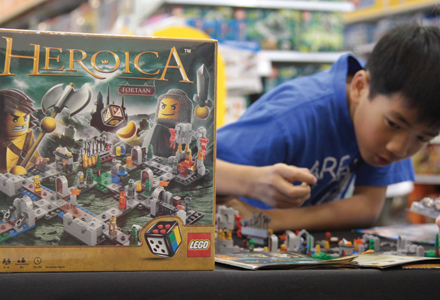 To support the launch of its HEROICA board game platform, LEGO this past October unleashed 300 brand ambassadors simultaneously to 300 locations where kids often gather on a Saturday afternoon—Toys”R”Us. The goal was to raise awareness and get LEGO’s target of six- to 12-year-old boys to play the game, which hit retail shelves in June, and encourage their moms to buy it. But the real game play took place three weeks before in the scramble to find 300 suitable brand representatives and 30 regional field managers to handle the one-day event.

“The brand ambassador is probably the most important aspect of any program for me,” says Vince Rubino, manager of event marketing at LEGO. “We have a high-quality brand and don’t take lightly handing it off to someone to go out and represent us.”

Furthermore the stakes in this game day were high. LEGO is known around the world for its brightly colored little bricks that are used by kids of all ages to construct castles and earthmovers and all manner of things, but two years ago it extended its nameplate into the board game category. Since then, it has gained market share as consumers recognize the LEGO branding and quality in these games. But, as with most new board games, as Rubino explains, “you need to explain the play of the game a little bit more.”

HEROICA, an adventure game with the tagline, “The board game that thinks it’s a video game,” is a prime example. Inspired by video and computer games, the action involves heroes who battle villains as they make their way around the board, trying to win swords and crystals to overcome the evil lords. And, since this is LEGO, after all, the kids first construct the rooms and dungeons, and even the dice, involved in the game.

“To just read that on the packaging doesn’t necessarily relate it,” Rubino says. “We knew we had to go out and explain the game play. And when we looked at the timing, we thought what better way to do it than at retail.”

To that end, Rubino enlisted the recruitment team at Marketing Werks, the Chicago-based agency that has been its event partner for years, to find the folks to fit the bill. Its challenge: to enlist people who could relate to the boys in a cool way but also to their moms, since she is the one who typically holds the household purse strings. The candidates needed to convey that clean-cut boy or girl next door image that is so important to LEGO. They also needed to have a passion for the brand and understand how important LEGO is to kids and talk about it in a way that is relevant to them. A gaming background was a plus, and one other not-so-minor detail—they had to pass a criminal background check.

Marketing Werks jumped into action, tapping into referral networks and social media. “Putting up 300 postings and waiting a week or two for a candidate to come back wasn’t cost effective and wouldn’t have targeted the people we wanted to go after,” says Matt Garvey, HR director at Marketing Werks who handles its in-house recruitment firm, WeKnowTalent.

Garvey’s five-person recruitment team targeted niche candidate pools with a high propensity to respond and yield the necessary attributes such as experience in childcare, board gaming, retail and geo-targeting. It also tapped Facebook and retail and gaming bloggers and tweeted and re-tweeted every few hours (its handle is @WeKnowTalent). This targeted recruitment approach enabled the team to ensure that for every 10 applicants, two were qualified and hired.

Once they filled the spots, regular communication with the brand ambassadors took place. “Our mission was to make sure they were engaged and educated on the brand and the experience and the expectations of the event,” says Lee Sullivan, vp-client services at Marketing Werks. “They received regular communication from the point at which they were hired until the day of execution and beyond, for the recapping piece.”

Marketing Werks’ four-person client service team managed the 30 field managers who in turn handled the 300 brand ambassadors. The recruits received a welcome email, followed by an event kit containing the materials needed for the in-store event. Training took place online and on the phone to ensure they understood the game play, their responsibilities, expectations of the engagement and how to manage the crowds.

Outfitted in branded t-shirts and khakis, the brand ambassadors set up shop near the front of the stores. Their tabletop footprint included the HEROICA Castle Fortaan board game (one of four games comprising the HEROICA game platform), freestanding banner signage and palm cards that mimicked collectible keepsakes. They were required to send a set-up photo to their field manager for approval and random spot checks took place. Marketing Werks also maintained a hotline throughout the day.

Like the Castle Fortaan heroes who freed the kingdom and recovered its relics, at the end of the day LEGO also took home the golden prize. The event garnered 61,286 impressions, 23,244 consumer contacts and 8,456 one-on-one demos. LEGO Games’ week-over-week sales increased by 28 percent and HEROICA week-over-week sales increased by 134 percent.  EM