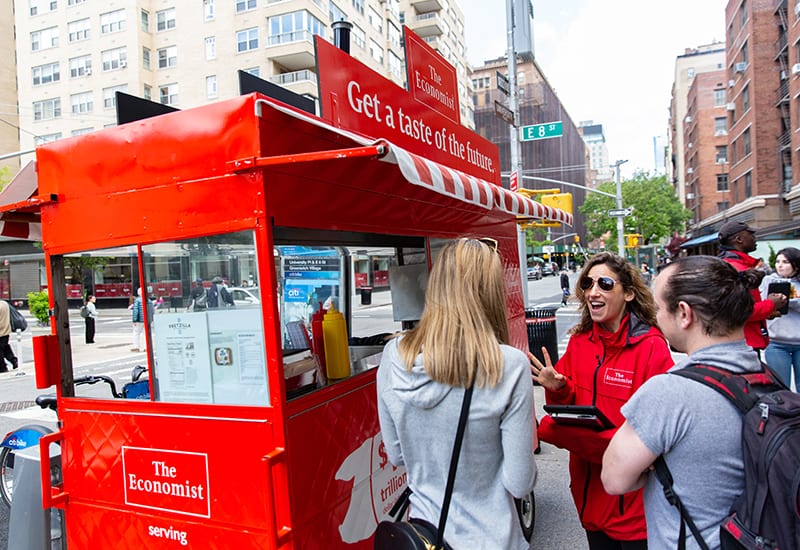 How Brands from Bacardi to Salesforce are Tackling Event Food Waste

There’s a pressing topic that event marketers can no longer ignore: food waste. The USDA estimates that 30 to 40 percent of the country’s food supply ends up in landfills, while the National Resources Defense Council (NRDC) reports that food waste is responsible for roughly the same amount of greenhouse gas emissions as 37 million cars–one in seven on the road today. Add to that the waste that’s often generated from the containers food and beverages are served in at events, and it’s clear the industry has some work to do.

Fortunately, some brands have been making a concerted effort to either reduce event waste or produce zero-waste events, meaning less than 10 percent of the total material generated by the event goes to the landfill. It’s a huge win for the environment, and frankly, for their respective businesses. A 2017 NRDC study reported a 14-fold ROI for companies implementing food waste reduction efforts or upcycling practices, and it’s no secret that today’s consumers are more likely to interact with brands that support a cause, particularly one related to the environment (thank you, millennials).

The fact is, most people are eager to participate in sustainable practices, but need a push in the right direction.

“You’ll have people that are super excited to finally have the opportunity to do the right thing,” says Meredith Danberg-Ficarelli, director at Common Ground Compost, a compost and recycling consultancy with an event services arm. “I think a lot of people feel guilty for engaging in a system that depends on disposability. If people are given the option to reduce their waste, especially if it’s as easy and efficient as it is when they’re not reducing their footprint, they’re excited by it.”

According to the National Restaurant Association’s annual “What’s Hot” culinary forecast released earlier this year, zero-waste initiatives are trendy, too. Zero-waste cooking was named a top-five culinary trend for 2019, while locally produced spirits and hyper-local ingredient sourcing were also cited as key trends.

It’s a lot for event marketers to absorb, but the trailblazers in this space have proven that the resources and know-how to tackle waste in events are available, it’s just a matter of implementing them. Here’s a closer look at how waste challenges are being addressed across the event spectrum. 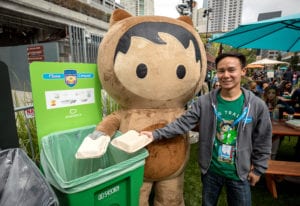 If you’re familiar with Salesforce, you know that the software company has always been a frontrunner in the sustainable events movement. The brand currently operates its events around four pillars: sourcing responsibly, reducing waste, conserving resources and inspiring attendees. Each of them was brought to life at the company’s Connections conference this past June. The digital marketing and commerce event was held in Chicago at McCormick Place—the largest convention center in North America—and hosted over 10,000 people (George P. Johnson handled).

To reduce waste and conserve resources, Salesforce eliminated beef from the event menu. Why? Beef has an immense ecological footprint from a water and carbon perspective, and by removing it, the brand helped to conserve over two million gallons of water during the three-day event. In place of red meat, Salesforce offered more vegetarian, chicken and fish options, with plans to explore plant-based menu items when they’re available at scale.

The brand provided a number of waste stations comprised of composting, recycling and landfill bins, with signage depicting which types of materials attendees should place in each bin. It’s also become common event practice for Salesforce to employ “Green Angels,” volunteers that help attendees responsibly navigate the waste stations, and eliminate any confusion they might have. Other sustainable efforts at Connections included daily lunch served in 100 percent compostable packaging, working with eco-friendly vendors and a gamified water refill program that let attendees track how many times they refilled their branded, reusable water bottle via an app, and subsequently win sustainable prizes.

“I think that there is much more awareness than there used to be,” says Sunya Norman, director-sustainability at Salesforce. “There’s also a movement to bring this sort of content to traditional events, something Salesforce does particularly well. We were fortunate to be able to hold a Climate Summit at Dreamforce last year where Al Gore keynoted. I think it’s more and more common that events are becoming a little bit less transactional and more about inspiration and connection.”

Another trailblazer in the space is C2 Montréal, which hosts a creativity conference of the same name each year in Canada. Among sustainable efforts at this year’s event were the banning of plastic straws and single-use water bottles on-site; a reduction in the amount of red meat served, supplemented by an increase in vegetarian offerings; the mandatory use of reusable, compostable or recyclable dishware throughout; a coffee pod recycling program; and composting and recycling stations. C2 also aimed to limit the total amount of waste per participant each day of the event to a maximum of one kilogram, which is equal to 2.2 pounds (data from the 2019 show has yet to be released, but the same goal was achieved in 2018). 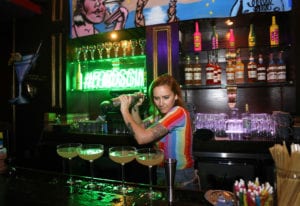 Blurring the lines between b-to-b and b-to-c, the invite-only Summit ideas festival (a force for sustainability in its own right) brought on Fords Gin as a sponsor of its event last fall (Parade Agency, Los Angeles, handled). There, the brand produced a pop-up cocktail event in partnership with Trash Tiki, a bartender group that creates cocktails from upcycled waste products.

“What Trash Tiki does so beautifully is talk about how can you get the most out of everything that you’re using, whether it’s taking the pits from an avocado and using those to create an Orgeat syrup, or repurposing leftover pastry to create something that can go into a drink,” says Sharon Bronstein, marketing director at The 86 Co., creators of Fords Gin.

The brand’s “Super Tiki Wasteland Paradise” featured gin-based craft cocktails, recycled drinkware and tiki art made from Summit’s waste products. Fords worked with a glasscutter to refashion leftover bottles of its gin into glassware used for cocktails, and with Superchief Gallery to repurpose cartons, bottles and even cardboard to integrate branding messaging, including “Drink Like You Give A Fuck.” 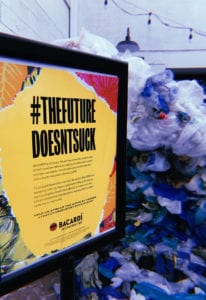 Bacardi and Lonely Whale are aiming to eliminate one billion plastic straws by 2020.

If you’ve been handed a metal straw at an event over the last few years, chances are, the practice was inspired by Bacardi, which in 2016 became the first global spirits company to pledge to eliminate single-use plastic straws at all of its events.

In partnership with Lonely Whale, Bacardi is working to eliminate one billion plastic straws by the end of 2020, inspiring consumers to follow suit with a catchy #TheFutureDoesntSuck tagline—and the brand is well on its way. During the South Beach Wine and Food Festival in Miami, it eliminated 20,000 single-use plastic straws in one night. Similarly, at Bacardi’s activation at this year’s Bonnaroo Music & Arts Festival, cocktails were served in bamboo cups. At other locations across the festival where its beverages were sold, the drinks were served in eco-friendly cups that were fully compostable. (Fun fact: The Nashville Food Project also hosted a zero-waste cooking demo at this year’s festival.)

The brand additionally works with local partners to reduce food waste at its events. This year, at both Tales of the Cocktail and Bar Convent, spirits trade shows, Bacardi partnered with local bars who took in leftover cocktail produce from the events, like lemons and limes.

In terms of modern experiential trends, Dunkin’ nailed two of them over the fall with its “The Home That Runs on Dunkin’,” a tiny house experience the brand created in partnership with Airbnb and actress Olivia Wilde, designed to promote sustainable practices while offering a stylish immersion into the chain’s branding and the tiny house-inspired “do more with less” trend. The structure, which traveled the country, ran on eco-friendly biofuel from 65,000 pounds of used Dunkin’ coffee grounds. The concept likely piggybacked off of The Economist’s “Grounds for Change” coffee cart activations from 2017, which aimed to educate consumers on the fact that biodiesel made from used coffee grounds is comparable to the best biodiesels on the market. 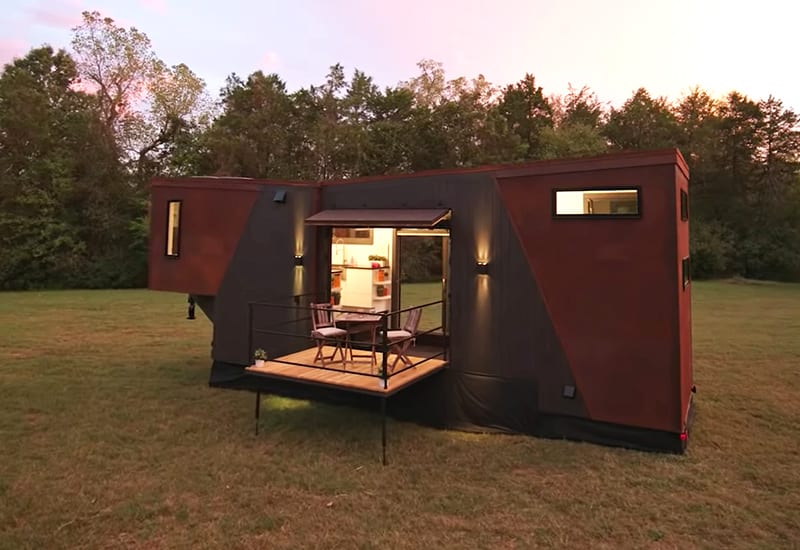 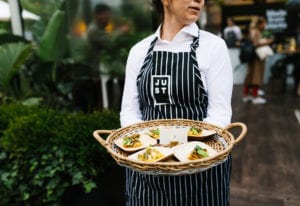 With the famed Impossible Burger continuing to gain momentum, and an increase in consumers seeking more eco-friendly meal options, the plant-based food category has been booming, along with the live experiences that promote it. Even IKEA is in the process of creating plant-based meatballs based on a growing demand from customers to have access to more sustainable food options.

In May, JUST turned attention to breakfast and its plant-based JUST Egg product made from protein-rich mung beans with a sampling tour that cooked up different experiences in each of the four markets it visited (MKMCreative, San Francisco, handled). The program involved sampling vehicles, lounges, activations and takeovers, all designed to attract and engage the brand’s millennial target and educate consumers about plant-based alternatives.

“These cities are heavily populated with our target consumers, the urban millennial moms that are eco-conscious but also conscious about what they’re eating and putting into their bodies, and conscious about allergies and different lifestyle choices,” says Jordan Viola, brand director at JUST. “They want to be thoughtful about the decisions they’re making, not only about what they eat at home, but when they go out.”

The Economist returned to the streets of New York City May 23 to June 13 to continue fueling its “Feeding the Future” campaign and to highlight the alternative protein market, as well as the environmental impact of consuming meat regularly (Sense, New York City, handled). In partnership with plant-based Beyond Sausages, the publication took a branded hot dog cart to the streets, offering consumers hot dog-style sausage samples, plant-based education and a subscription deal at locations across Manhattan and Brooklyn.

And in June during World Meat Free Week, British supermarket brand Sainsbury’s opened up the U.K.’s first meat-free “butcher” shop. The pop-up was designed to look like a traditional meat market with elements like (veggie) sausages hanging in the window and an array of cuts derived from 100 percent plant-based alternatives on display. Specially trained “butchers” were on hand to educate attendees on plant-based options and how vegan cuisine has evolved over the years, as well as to offer cooking demos. Items like jackfruit burgers and chorizo-style “shroomdogs” were available for sampling. 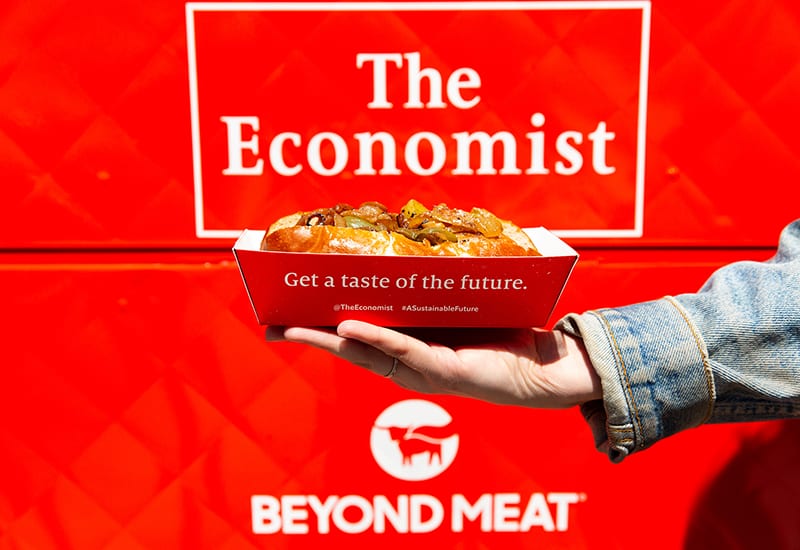 The Economist and plant-based Beyond Sausages educated New Yorkers on meat alternatives.