Take a Spin Through the Best Auto Activations of the Year 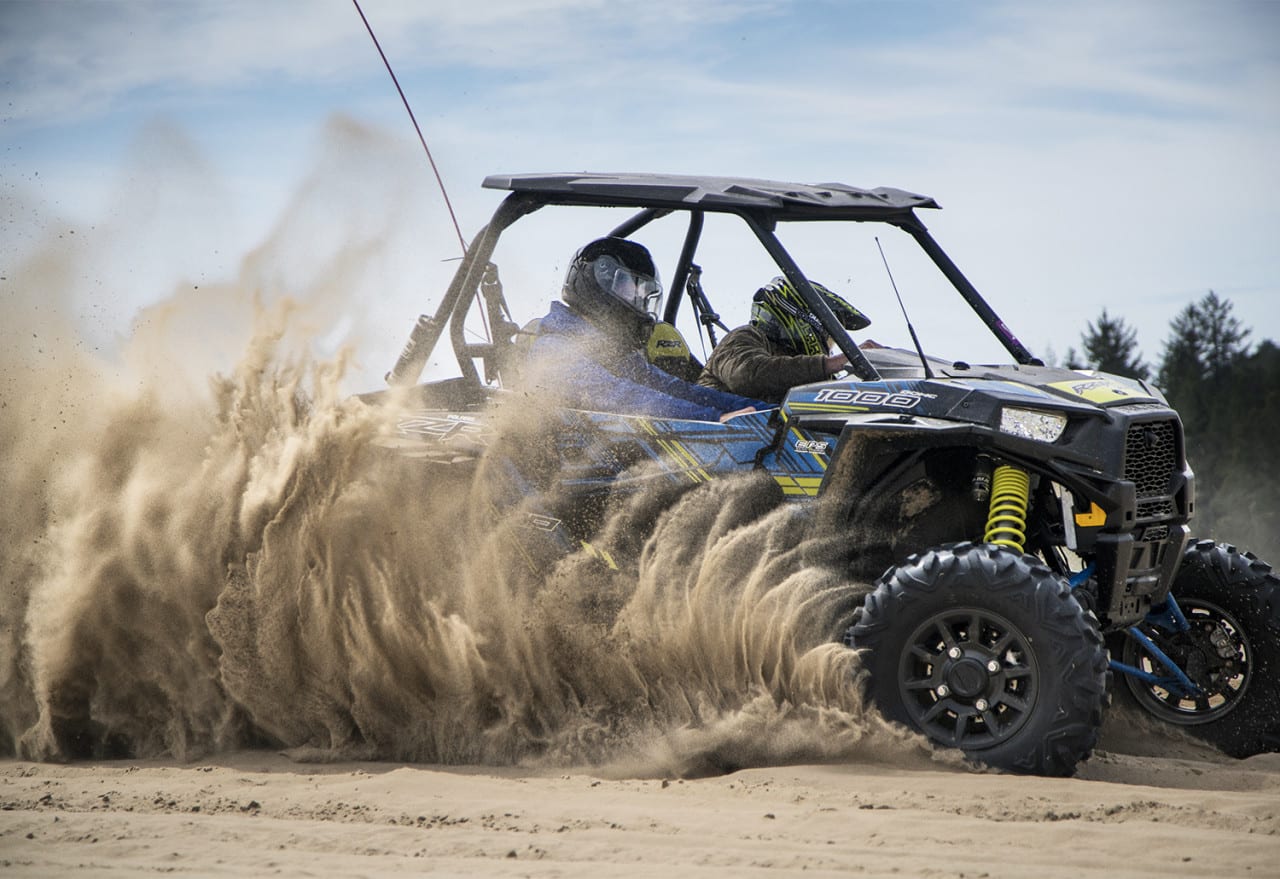 Cruise Through the Best Auto Activations of the Year

From Fashion Week to Fashion Island, New York City to Newport Beach, automotive event marketing has been in high gear. Throughout 2017, the auto brands took to music festivals, film fests and fashion shows, plied the city streets, followed country roads and headed down wilderness trails to connect with car buyers. Along the way, they fired up VR and brain wave technology, built immersive brand houses, forged creative partnerships and even deployed good ol’ ride and drives for those incomparable behind-the-wheel experiences. As they rev up for 2018, we’d like to take you on a spin through the best of the year’s auto activations, and we’re betting there’s even more excitement down the road. 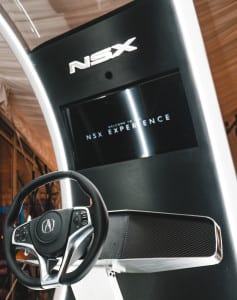 Attendees experienced a customized journey as landscape, color, music and speed all changed based on their mood.

First stop, Acura Mood Roads, which kicked off the year at Sundance by leveraging VR and brain wave technology in a personalized NSX supercar engagement that resonated with the film festival’s independent-minded attendees.

Participants entered a spherical motion simulator equipped with a performance driver’s seat and 30 biometric sensors that measured 24 integration points, such as their brainwaves, heartbeat and facial expressions. Once buckled in, they experienced a customized journey in real time as landscape, color, music and speed all changed based on their mood as interpreted by the sensors. As a result, no two driving experiences were exactly the same. “Instead of us controlling the experience, the user actually controlled the experience from a sound, feeling and visual perspective,” says Jennifer Fini, manager-new media strategy and activation at Acura.

As opposed to the traditional VR set-up, users looked directly at a high-definition immersive, almost 360-degree “Mood Roads” screen without the cumbersome goggles required in other activations. Instead, they wore headsets that measured their biometric inputs. “From a sound, feeling and visual perspective, it is a first-of-its-kind integration of these different technologies in this way,” Fini says. Indeed.

Next stop, Cadillac House, which opened last year on the ground level of the brand’s new global headquarters in New York City’s trendy SoHo neighborhood and is still going strong. “We wanted it to be the first public-facing stakes in the ground of establishing Cadillac as New York City’s hometown automaker and as an engaged corporate citizen following our move here from Detroit,” says Nathan Tan, associate director-partnership and experience at Cadillac.

Designed not as a showroom or retail environment, the 12,000 square-foot permanent space lives at the intersection of the arts, culture, fashion and culinary worlds. A gallery showcases cutting-edge contemporary art; a retail pop-up features up-and-coming designers. There’s a café hosted by local roaster JOE Coffee, and then there are, of course, the cars on display. People can attend Cadillac House After Hours, a weeknight cocktail series collaboration with hip New York City bars that offers live jazz. Other recent events have included a City Harvest dinner series, Andy Warhol’s Portrait of America and a Toilet Paper Paradise installation. As of press time, artist Daniel Arsham’s Lunar Garden, a reinterpretation of a Japanese rock garden, was on exhibit (Agency: Gensler, New York City). 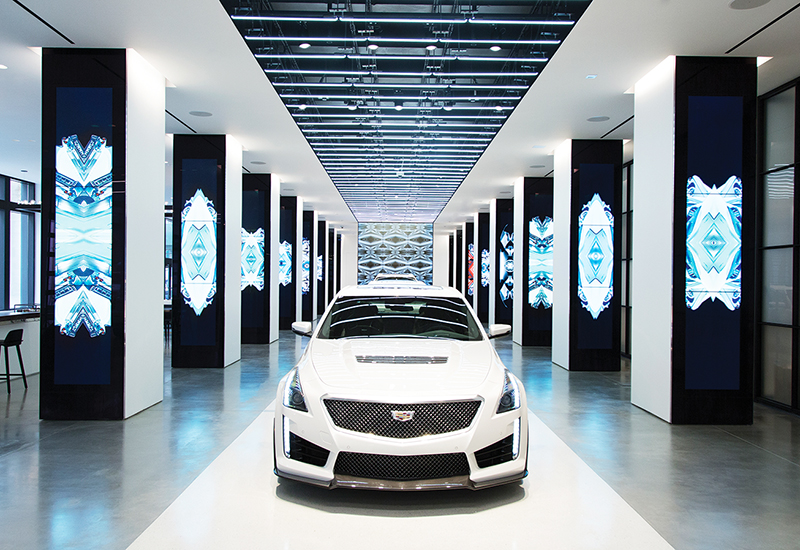 The 12,000 square-foot Cadillac House lives at the intersection of the arts, culture, fashion and culinary worlds. 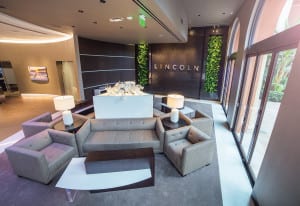 The Lincoln Experience Center at The Star in Frisco, Texas, is another great brand expression. This is Lincoln’s second such facility, which opened in late August, and follows on the heels of its first, at Fashion Island in Newport Beach. The Star also houses the Dallas Cowboys World Headquarters, a convenient location since Lincoln became the official automobile of the team last year. The fact that Dallas is the second fastest-growing luxury market in the U.S., after California, doesn’t hurt either.

Both Lincoln Experience Centers exemplify the brand’s mission to provide personalized client services and “effortless” ownership as part of a reinvention strategy to change consumer perception about the brand and its cars five years ago. The newest Experience Center offers a connectivity lounge, a “story wall” where consumers can learn about the brand, an interactive digital “configurator” where they can design their own model, a space where they can immerse themselves in Lincoln’s Black Label themes and Revel sound system, schedule a test drive and more. Oh, and enjoy an exclusive blend of coffee in the onsite café. There’s water and treats for the pups, too.

According to Lincoln, 90 percent of Experience Center guests say their visits have changed their view of the brand, which is impressive since 87 percent of them are competitive owners. Seems like Lincoln may be on to something. 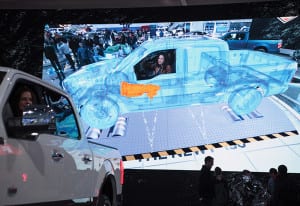 AR footage was displayed in real time on a two-story, high-resolution LED screen behind the cars

Speaking of experiences, that’s just what Ford brought to its auto show engagement with its  augmented reality-enabled dive into the technology underlying three of its vehicles—the Ford GT, the 2018 F-150 pickup truck and the EcoSport SUV. The result was a virtual demo that immersed show attendees in the features of the cars in a memorable and understandable way.

Ford’s AR installation relied on a system of stereoscopic cameras, tracking software and a game engine that overlaid 3D graphics on a live video feed, which made the vehicles appear transparent, as if they were made of crystal. The resulting AR footage was displayed in real-time on a two-story, high-resolution LED screen behind the cars, so without having to wear goggles or headsets, attendees could follow along with the narrator who presented the vehicles and highlighted their high-tech features.

The result? A theater-like experience as AR seemingly brought the vehicles to life, demonstrating their “invisible” product benefits such as safety features and active aerodynamics, while making a powerful brand statement at the same time (Agency: Imagination, London).

Music activations, like the Honda Civic Tour, the automaker’s annual concert series, hit a high note with fans. The tour, which just completed its 16th year, added a culinary twist this go-round—a backstage Civic Tour City Flavor experience in 10 markets developed with Ryan Tedder, lead singer with headliner band OneRepublic, along with a special-edition Honda Civic Type R and Honda Rebel motorcycle custom-designed by the group. The pop-up experience combined local food trucks, a social media influencer and a contest winner in exclusive backstage moments. In Boston, for example, musician James Arthur and influencer/musician Jennel Garcia hosted an event with The Cod Squad, a local food truck, that dished out clam chowder, lobster rolls and more while they discussed music, touring and, of course, food. For added reach the events streamed live on the musicians’ and influencers’ social media pages and on the Honda Stage social page as well.

More than 4.5 million music fans have attended Honda Civic Tour concert events since 2001, and as the top-selling model to under-35 buyers in six of the past seven years, according to HIS Markit, a media company based in Washington, D.C, that’s music to Honda’s ears (Agency: Marketing Factory, Venice, CA). 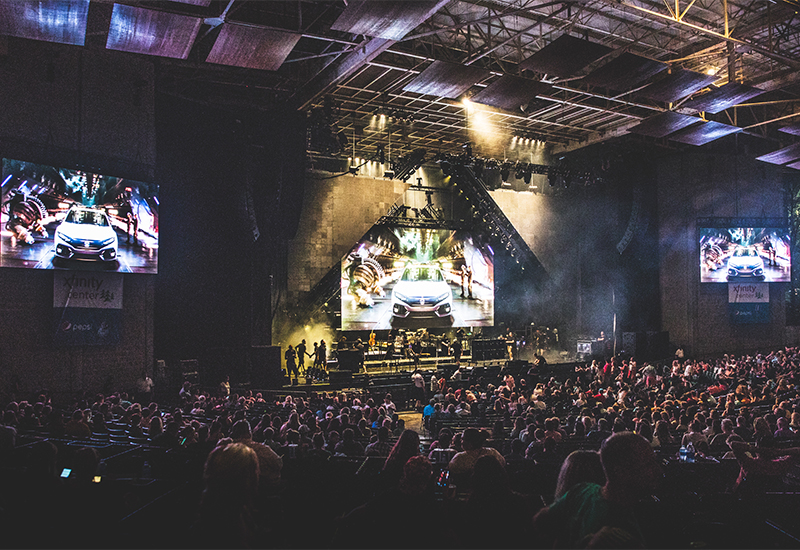 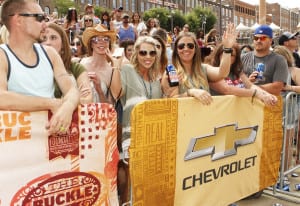 Chevrolet struck a chord with fans at CMA Fest.

Chevrolet is another brand with a deep musical heritage. Chevys are mentioned in the lyrics of practically all genres of music, from Don McLean’s “American Pie” to Motley Crue’s “Dr. Feelgood,” but it strikes a special chord with country music fans. It’s a connection that Chevrolet takes seriously, returning to Nashville with a truckload of vehicles and event marketing initiatives over the four-day Country Music Festival. “From a target standpoint, it’s a great mix, it’s young, kind of broad and attracts male and female fans, so it’s a great place for us to be every year,” says Ben Honinford, assistant experiential marketing and brand partnerships manager at Chevrolet.

Chevrolet sponsored two main stages along with festival activations that got the fans in the swing of things. Among them, the Equinox Recharge Lounge in Chevy’s Walk of Fame Park, where attendees could get their hair touched up by on-site stylists and pose for a photo op before a branded step-and-repeat. A Kick Your Boot Up activation engaged fans with the lift-and-lower tailgate on Chevy’s new Equinox model. There was a lounge area for Chevy owners, lots of swag and free rides as part of its “Catch a Chevy” program, along with special appearances by superstar Luke Bryan, concert seat upgrades and more (Agency: Jack Morton Worldwide, New York City). 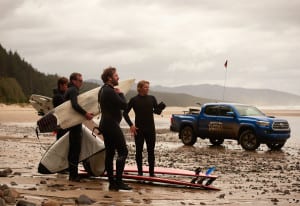 Toyota’s Hotel Tacoma activation was inspired by the idea of play.

Toyota this year headed off the beaten path to Cape Lookout on the Oregon Coast with Hotel Tacoma, an activation inspired by the idea of play. This unique take on a “hotel” brought together an eclectic group of athletes, entertainers and adventurers in engagements that included a Tacoma Ride-and-Drive, a Polaris Side-by-Side, Yamaha dirt bikes, Specialized mountain bikes, paragliding, ocean activities, fishing, crabbing, and lumberjack activities such as archery, hatchet throwing, leather smithing and more. Then there were the five-star meals, early morning beach yoga and safari tent massages. And that’s not the half of it.

It was all about reinforcing the connection between play and the Toyota Tacoma brand with its “Play Now” campaign. “Our goal was about creating a sandbox for enthusiasts to share their adventures and experiences in an authentic way that resonated with our target,” says Thomas Crahan, general manager, truck and SUV marketing at Toyota Motor N. Am. “It was an epic weekend of play.” We would agree (Agency: Saatchi & Saatchi, Los Angeles). 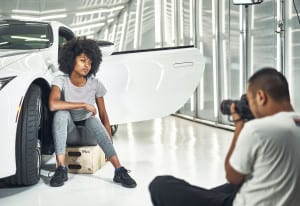 For Lexus, the glitz and glamour of New York Fashion Week set the scene for its #HowFashionTravels campaign and a photo activation that gave attendees their moment in the spotlight. The Lexus: Set in Motion photo shoot, engineered by fashion photographer and Interview editorial director Fabien Baron, took place on a set inspired by the 2018 LC 500. Guests received the star treatment with hair and make-up touches, had their photo taken, then headed back to the lounge where they chose their favorite show for social media sharing. As official automotive partner of NYFW, the brand also provided a fleet of vehicles to whisk the fashionistas around town (Agencies: Team One, Los Angeles; LaForce, New York City).

Volvo, on the other hand, found its shining moment during the solar eclipse in Charleston, SC, where it is building a new plant that just happened to be smack dab in the sun’s infamous “Path of Totality,” that 70-mile swath across the U.S. where the eclipse was most visible. As part of its XC60 launch campaign, the Swedish automaker teamed up with CNN to deliver the experience around the world in 360-degree video and in 4K virtual reality. Four of the live streams featured Volvo-branded content and integrated 2018 Volvo XC60s specially outfitted with advanced 360-degree cameras, along with experts at spots along the way who added color commentary to the experience. It was, in a word, cosmic (Agencies: Grey, Mindshare, Courageous, New York City). 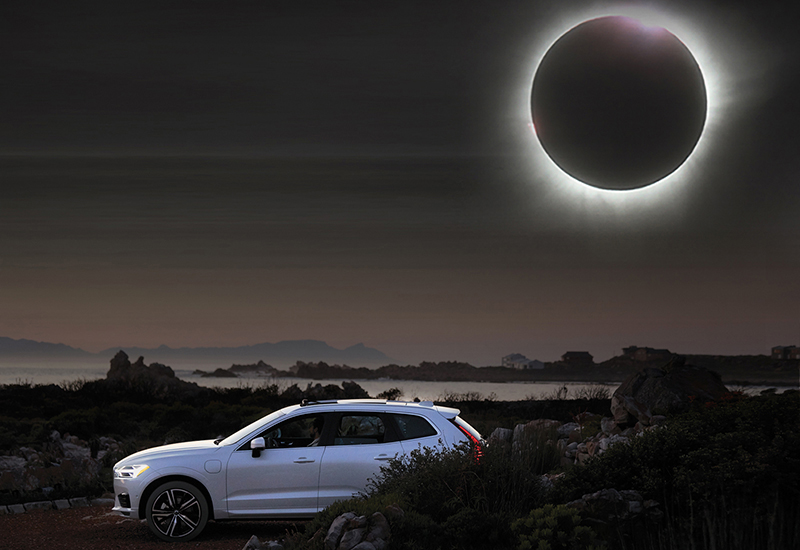