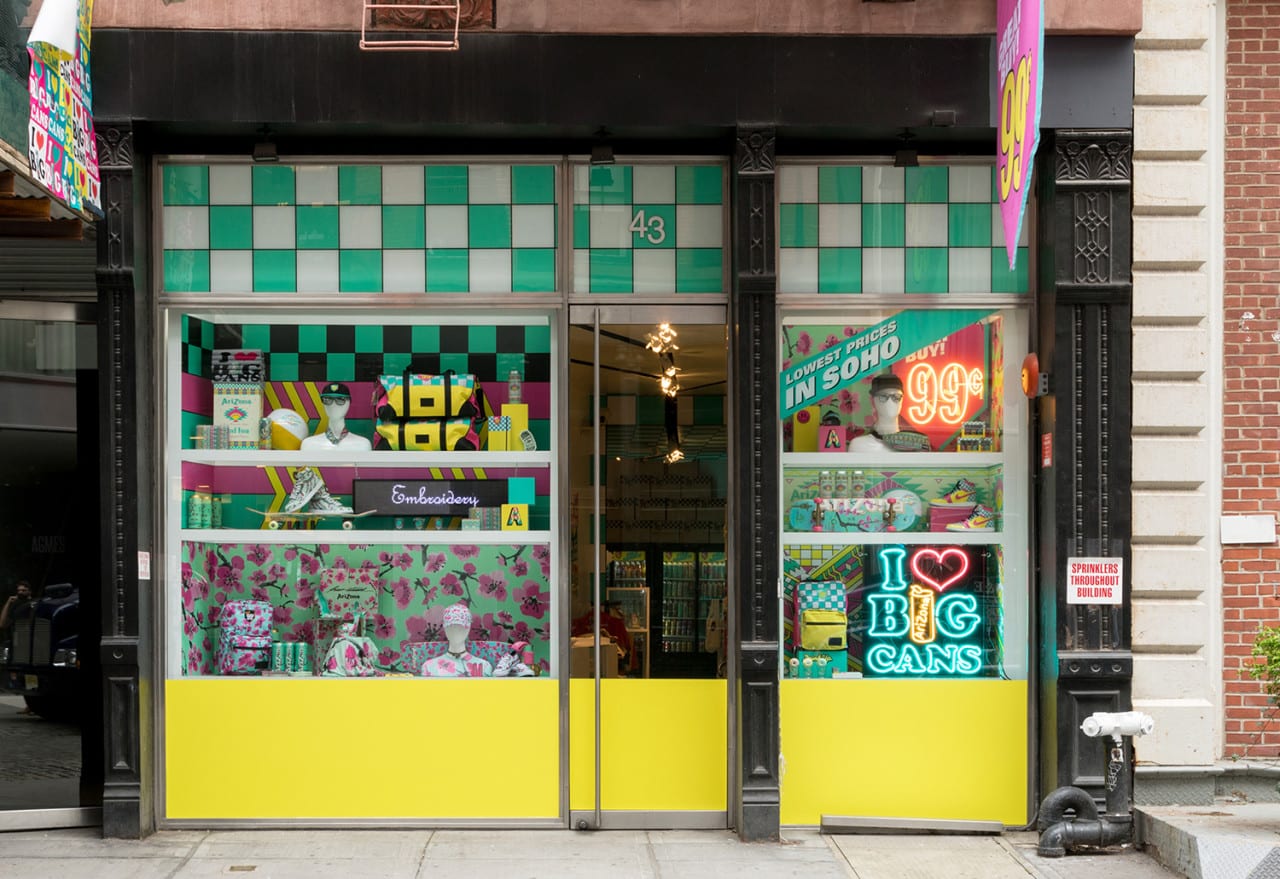 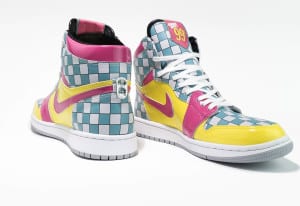 To create exclusivity, the custom Jordans were doled out to celebrities and influencers and raffled off to customers who came early each day. Beyond the merch, the store offered a secret, serene garden in the back of the store with cherry blossom trees, rock pathways, a koi pond and the area’s centerpiece: a gold pagoda. New York City tattoo artists JonBoy and Rob Green gave consumers free Arizona-themed flash art on a first come, first served basis; free big cans of classic teas in 78 flavors were given out; and guests could have custom patches embroidered on select merch items—all sold at its new website greatbuy99.com after the pop-up finished its six-day run on May 21.

It was a mammoth affair for Arizona Beverages owners, brothers Wesley Vultaggio, chief creative officer, and Spencer Vultaggio, cmo, who have taken up the mantel from their father and founder Don Vultaggio. The company has relied on word-of-mouth marketing rather than traditional advertising to promote their brand. In fact, the pop-up was the largest marketing initiative in the brand’s history. We caught up with the brothers to discuss their inspiration and strategic goals behind the activation. 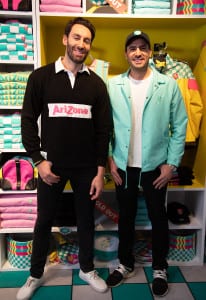 EM: What are the marketing goals of the activation?

Wesley Vultaggio: We celebrated our 25th anniversary last year and we wanted to do something that we’ve never done before, which is to celebrate and honor our heritage and the nostalgia that comes with our brand. We thought that it would be a perfect opportunity to do a pop-up. Especially in New York, it’s a trending thing and in a neighborhood like SoHo it’s happening quite often. We juxtaposed our brand, and the 99-cents store concept, in a neighborhood with Chanel and high-end boutiques. [The idea] went from doing a small pop-up, more experiential, to a full-on retail experience mixed with the experiential part of it.

EM: How did the idea develop and expand?

Spencer Vultaggio: When we first started we knew we wanted to do some sort of pop-up experience but we weren’t sure exactly where we were going to take it. We’ve been making merchandise for a long time. At first, we were thinking of doing something more like a party or an event, night by night, maybe with performances. But we’ve seen what other brands have done in the space in the past—larger brands that spend a lot of money on this type of stuff—and we didn’t want to compete in that world. We wanted to touch people a little more intimately. Wesley and I work closely with the brand, so we had the opportunity to be more creative and hands-on with the project.

EM: How long have you been making merchandise?

Spencer: Since the early ’90s. But Wesley came on to the company 15 years ago, and I came on 12 years ago, and we made the merchandise more fashion-forward.

Wesley: We’ve made t-shirts, hats, sweatshirts, towels, for many, many years. We not only use them for giveaways for our sales people, but we also had a thriving e-commerce business where we sold green tea-related things and checkerboards, kind of playing with our branding, which we found people enjoyed. We’d get a lot of feedback from people saying, we want more stuff from you guys. Circling back to the pop-up, it became a good opportunity for us to dive more deeply into that world where we always wanted to play. Spencer and I like fashion, we pride ourselves on being fashionable guys, and we wanted to bring that fashion-forwardness to our brand.

EM: Your brand has not relied on traditional advertising to market itself. How has that strategy worked for you over the years?

Spencer: Our father doesn’t believe in moving the needle and the return on investment to traditional advertising. He maybe put up a couple billboards in the mid ’90s. So, we’ve never really relied on that. One of his mottos is, the cost savings that we’ve incurred through not advertising we pass along to the customer. That’s actually one of the pillars of the pop-up itself. It wasn’t a money-making strategy. We basically charged a little bit more than what we paid for the garments. It’s really to give back to the Arizona community and celebrating the 25 years.

Wesley: This initiative was the largest marketing campaign we’ve ever done in 25 years. And that’s why we put such time and effort into it. For our dad, it was an enormous undertaking, financially, and we wanted to make it special.

Spencer: Enormous to us. For a company of our size or larger, it would be just any other event. So, we looked at it a little bit differently and we took it seriously because we needed it to be as great as it was. 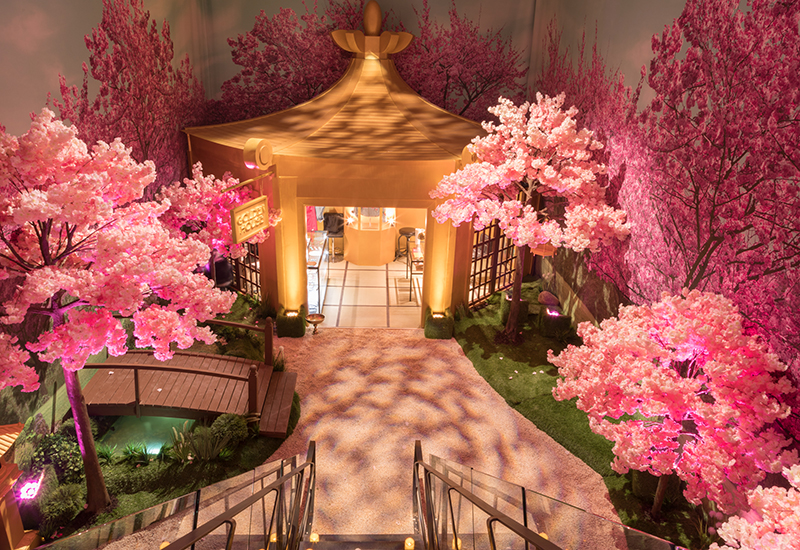 A serene garden in the back of the store featured cherry blossoms, rock pathways, a koi pond and a gold pagoda.

EM: Besides passing on savings to the consumer, what were the other pillars of the pop-up?

Spencer: Creativity, detail and excessiveness of the amount of merchandise and accessories that we undertook in creation. And I think that the experience of the actual store itself, the Arizona world, and in the back—the green tea garden.

EM: Without traditional advertising, how has your brand gained a cult following?

Wesley: We’ve put all of our time and resources into the packages themselves. We always use the best possible ingredients, all natural. And like we’re known for, we spend a tremendous amount of time designing the best-looking packages out there. So for 25 years, we’ve really become a word-of-mouth brand where people adopt our brand on their own, not because of some TV or radio campaign, and it’s grown organically because of that. We think that because of that, we have the cult following and people have a strong connection to our brand because it’s grown in that organic fashion.

Spencer: And also because of our 99-cent price point we’ve had for so long, people could rely on our products for consistent pricing. 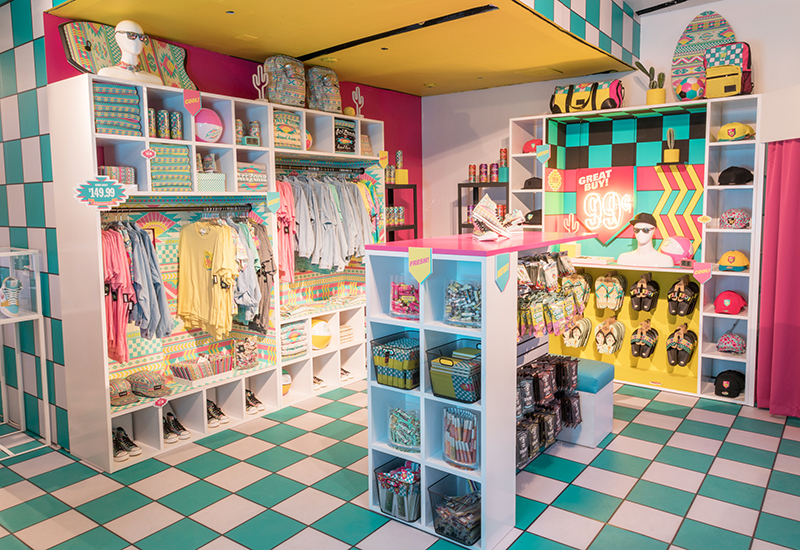 EM: The pop-up is not very logo centric. Can you talk about that strategy?

Spencer: We did have lower-priced items that have Arizona [on them] and I think people will enjoy wearing it throughout the summer because they are proud of being an Arizona fan. But some of the higher-priced things didn’t really say Arizona at all. With other brands that would be selling merchandise, it would be labeled. That would be the whole purpose of a brand selling something. We didn’t look at it like that. We think our imagery and our aesthetic speaks for itself and is representative of the brand and is fashionable at the same time. If you look at our G99, it’s checkerboard with yellow. You wouldn’t necessarily know it’s Arizona, but then when you say it’s Arizona it makes perfect sense. And our cherry blossom, of course, is synonymous with Arizona. And fashionable, too.

Wesley: And did you hear we dressed Pippa Middleton for the Royal Wedding?

EM: Did you really dress her? (wink, wink)

Wesley: No, we really didn’t.

Spencer: Yeah, we got lucky.

EM: Nostalgia is a trend in event marketing right now. Would you say the natural nostalgia element of your brand factored into your decision to go big with this pop-up?

Wesley: There are few brands like ours that people have a nostalgic connection to. You can talk to anybody and they remember the first time that they saw our brand, our big cans, in the early ’90s. People have memories of growing up with the brand. It’s just one of those brands that evokes a lot of nostalgia and we wanted to bring that to life. And the best way to do that is in some sort of experiential way, where you could have anything and everything you could remember from your childhood—whether it’s beach balls or pool floats or rolling papers. We included everything we could possibly get our hands on that we felt would honor our brand. We branded them sometimes with Arizona and sometimes more subtly, which I think people respected and liked. And with the green tea garden, kind of bringing that magical green tea bottle that we launched in the late ’90s to life, became a big nostalgic moment for people, too.

EM: What are your future plans with the pop-up? Will you bring it elsewhere?

Spencer: We’re in the infancy stages of figuring out where we want to take it next—and if we even want to. It was really successful, and so that’s the question we are being asked. We do want to continue that momentum and excitement of it, but we haven’t necessarily figured out where or when or what that even looks like at this point.

Wesley: The other way we’re looking at these pop-ups is as a vehicle to launch new products. For example, in this pop-up we launched a whole new snack division that we never really had before. We had our jerky there, we had fruit snacks and we had cotton candy. All were a tremendous hit for the week we were here in New York. So, we think that it could also be not only a way to market the brand but also to launch products in a fun way. Agency: Mirrorball, New York City.