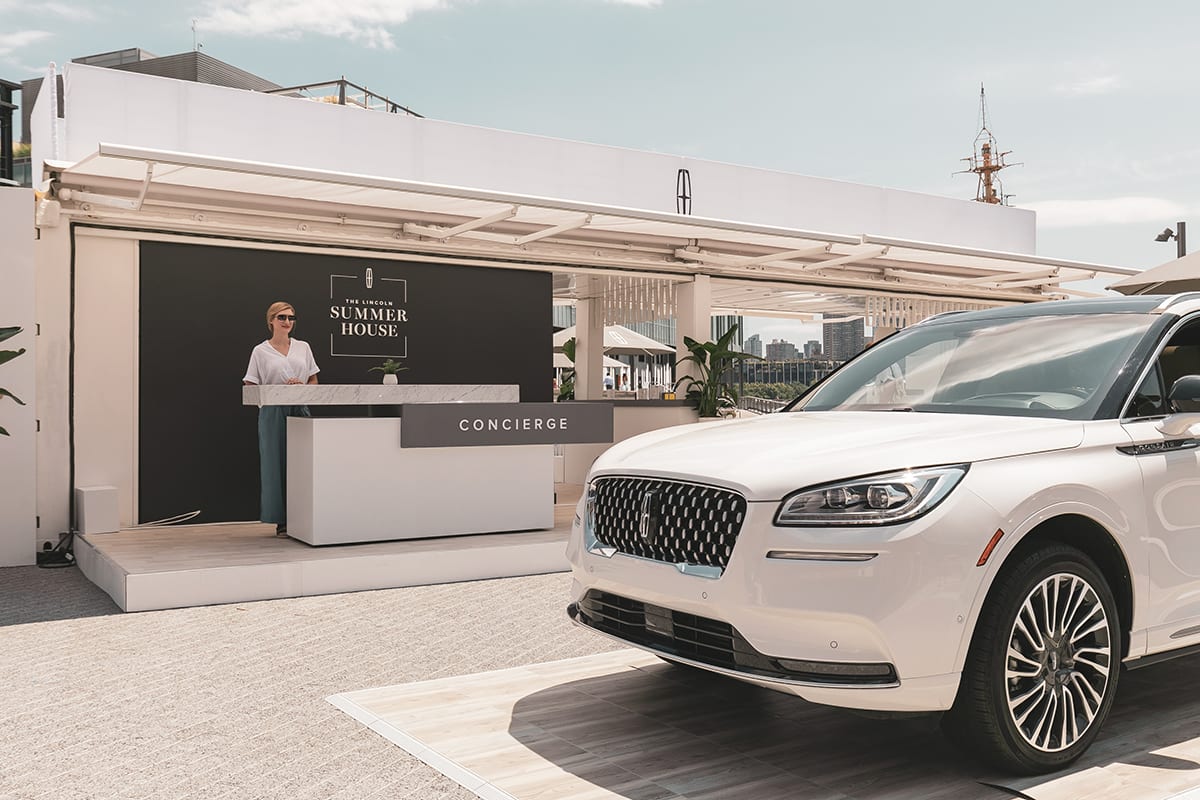 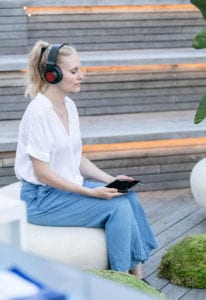 Lincoln partnered with the meditation app Calm for the Summer House experience.

Automakers know that to get consumers to fall in love with a vehicle, they need to get them behind the wheel first. And for a luxury automotive brand like Lincoln, that means avoiding a one-size-fits-all-approach. The brand continues to lean on stylish destinations to supplement the local dealership experience and provide a low-pressure environment for test drives. This past summer, the brand activated its second Lincoln Summer House, a partner-rich activation at Pier 17 in Seaport Square, Manhattan, of which the brand serves as a founding partner.

Open select weeks in August and September, the space was designed to be a “relaxing oasis” that mimicked some of the key features of the Lincoln lineup, such as comfort, sound and a quiet ride. It was also the scene of the buzzworthy influencer sleepover event, “Lincoln Under the Stars.” The Summer House touchpoints all mapped back to Lincoln’s “revitalization” brand messaging.

“This is an area of New York that has seen an incredible amount of growth and revitalization, and what we really sought to do with this activation is find ways to revitalize guests and that could be through a cool beverage on a hot day or it could be allowing them to stop and recharge themselves, to take a moment,” says Andrea Zuehlk, Lincoln media and integrated marketing manager at Ford Motor Company. “We also enhance their experience through strategic partnerships that help curate additional experiences for the target customer to participate in.”

Follows are six insights from Zuehlk on what drove the brand to execute an encore of Summer House this year, and how carefully crafted interactions have made a difference.

Marketers may feel pressured to create a splash wherever they pop up, or to force their decision-making based on a perceived “trendy” location. For Lincoln, the look and feel of Summer House needed to blend in with the surroundings and feel easy in order to attract both current and prospective customers.

“If it doesn’t fit within what people are doing there, and stands out like a sore thumb, that could potentially have the opposite effect of that relevant and positive experience you want to deliver, so being in Summer House for a couple years, we’ve paid attention and have tried to bring to life aspects that build upon what people are already doing at Pier 17,” Zuehlk says.

Be hyper-focused on one KPI.

In the pop-up space, foot traffic is a popular measure of success. But rather than be laser-focused on bodies and visitor counts, Lincoln instead focuses on social listening to see how and if visitors are spreading Lincoln messaging to a wider audience after the experience. In tracking sentiment, and comparing the #LincolnxSeaport hashtag leveraged throughout the campaign, Lincoln recorded an 89 percent positive sentiment rating with zero negative sentiment.

“No. 1, we’re looking at favorable opinion, so through these interactions and engagements, can we shift the focus more positively. This has a direct impact on top of mind awareness as well as purchase consideration,” Zuehlk says. “We monitor a number of things, like number of test drives and overall impressions, which are helpful, but really, it’s coming back to—if we can have a positive engagement with somebody, they may share that through word of mouth to their neighbor or family members.”

When your brand is popping up for a certain period of time, you may feel pressured to “sell” the experience, and instruct your brand ambassadors to be bold. But Zuehlk suggests pulling back the reins. Let the consumers come to you, she says.

“I can think of a specific example where there was a woman who ran through the area every day. She wasn’t bombarded by an in-your-face sales message or by anyone trying to attract her attention. But by the fifth time she ran by, she stopped to have a conversation, and the next week, she asked a couple more questions, so that’s an example of really knowing when and how to interact with potential customers,” she says. 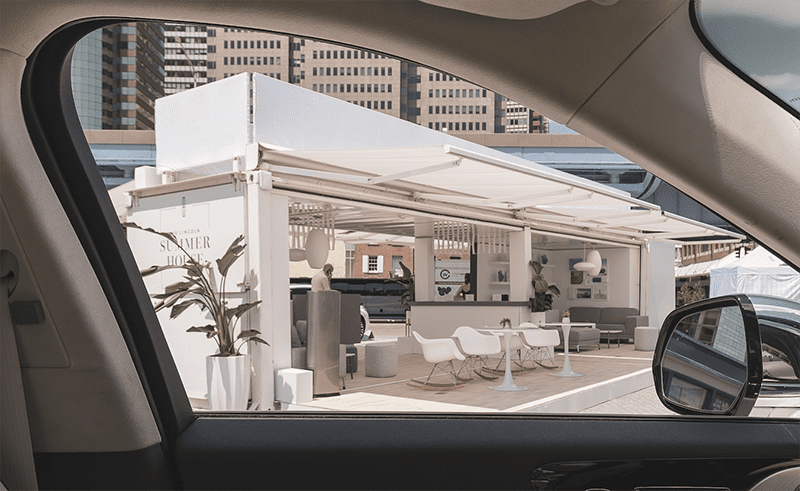 The Summer House touchpoints all mapped back to Lincoln’s revitalization brand messaging.

Listen to your current customers.

Lincoln recognized that, in addition to attracting potential customers and pushing test drives among them, it needed to accommodate its current owners and reinforce a positive message among them, too. Brand ambassadors needed to be prepared to answer questions about the vehicles Summer House visitors may already own. But overall, Lincoln leaned on listening over talking with each interaction.

“With Summer House this year, we were focused on the 2020 Lincoln Aviator, of course, which is a great new addition to the lineup, but that might not be the right vehicle need for everybody, so it’s trying to get a sense and understanding of how an individual would potentially use a vehicle—people open to considering luxury, but then understanding their need state,” Zuehlk says.

Be strategic with your partnerships.

Smart pop-ups leverage a wide variety of engagements to keep consumers and the press interested throughout their run, and this includes bringing in strategic partners whose messages align with your brand. For Summer House this year, Lincoln partnered with the meditation app Calm, high-end speaker brand Revel, and music streaming service Tidal—Revel and Tidal, specifically, are features in the Lincoln lineup. Consumers could recharge and relax before taking a test drive, when those features came to life.

“If we focus on Lincoln’s brand essence of revitalization—if it makes you feel better, it’s the right fit for Lincoln. In leveraging the wellness category, we partnered with brands for Summer House that had such credibility in those spaces,” Zuehlk says. “We were able to reinforce positive experiences and reinforce that Lincoln and Calm, or Lincoln and Revel, brands consumers are familiar with and have trust in, helped you feel better today.”

Successful pop-ups have a media component, whether it’s a launch night or VIP event. Lincoln zeroed in on glamping. Lincoln Under the Stars was a one-night sleepover event for influencers at Pier 17, where they drifted off to sleep to the original compositions of Anders Rehdin, a musician specializing in performing tranquil sounds to help induce sleep. Rehdin created an eight-hour album for Lincoln called “The City That Sleeps,” that leverages noises recorded from different neighborhoods across New York City. It’s available on Spotify.

The brand promoted the album on its social media channels, with the message: “In a stressful world, Lincoln helps people find their sanctuary, sometimes in unexpected ways.” And Zuehlk says that now, anyone, a Lincoln driver or not, can listen to the album, feel more rested and know that Lincoln helped them feel that way.

“This was a unique way for us to bring that notion of revitalization and feeling better to life, and what better way to feel better than to get a really good night’s sleep,” she says. Agencies: Hudson Rouge; Gradient, both of New York City.