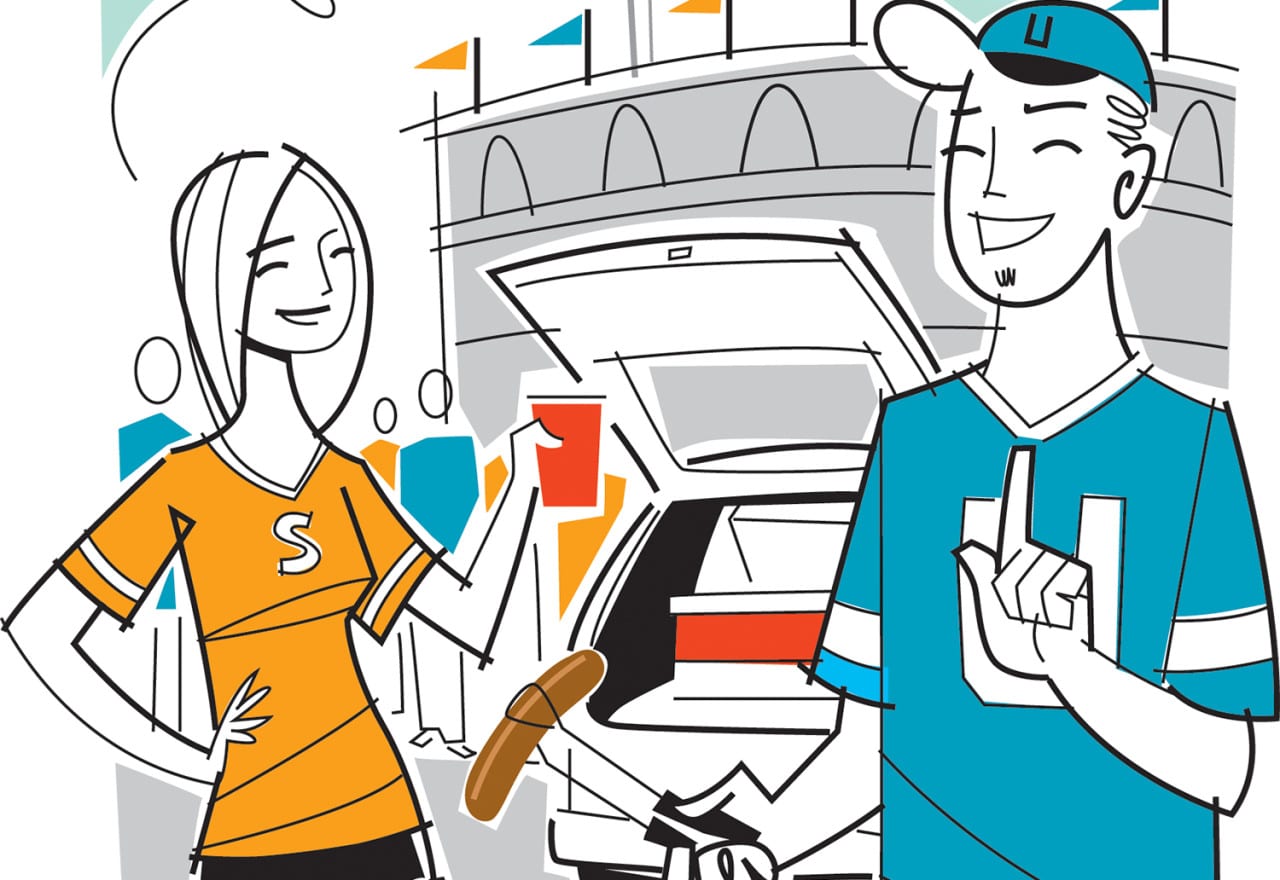 Baseball may be America’s pastime but football is the country’s most popular sport, and with increasing sponsorship opportunities in the college space, many brands are tackling the tailgating scene.

The appeal is evident. Connecting with consumers’ passion points is a proven recipe for success, football events attract huge crowds that cover a range of demographics and college sponsorships are far less costly than their professional counterparts. To get a better understanding of how the trend is evolving, we tapped four brands for insight on how to leverage tailgating strategies to get ahead of the game. 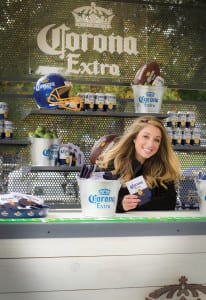 The relaunch of the Corona can prompted the brand’s inaugural tailgate tour, which made stops at three key college football match-ups. Targeting college alumni, the brand skipped the hot dogs and lawn chairs and created a more upscale tailgating experience that centered on a custom fabricated pergola.

Spread throughout the footprint were 55-gallon steel drums designed to look like Corona cans that functioned as high-top tables where consumers could sip beers and interact. Other engagements included a photo experience conducted on an iPad and emailed to participants, a wall of Corona cans that served as a photo backdrop, free temporary tattoos and a 30-foot inflatable Corona can. A smaller VIP area containing beer and tailgating-themed food was also created to give Corona’s sales force a dedicated space to entertain guests.

“We’re not the mainstream premium players,” says Alex Schultz, senior brand manager at Corona Extra. “We are the number one import beer in the U.S. and we know that once people have a chance to interact with our brand, it creates a more emotional connection for the consumer—and especially at something like a tailgate tour where maybe it’s a little more unexpected for Corona to be there. Once people have the chance to experience the can for themselves, we think that it’s a great opportunity for them to then think of us the next time they’re tailgating or whatever that can occasion is going to be” (Agency: Engine Shop, New York City). 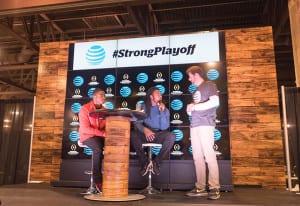 The It Can Wait simulator, aimed at younger fans, was one of the brand’s most popular engagements. Wearing Oculus Rift VR goggles, participants attempted to “drive” and text, and ultimately witnessed a virtual automobile accident.

Working with ESPN, AT&T also sponsored a three-day concert in downtown Phoenix, the AT&T Playoff Playlist Live. The free festival featured performances by acts like John Mellencamp and Walk the Moon, and streamed live each evening.

“College football is a very diverse market so I think we’re trying to connect with everybody, but we do certain things to connect with different demos,” says Mario Artesiano, senior advertising manager at AT&T. “Because football is so vast—you’re a fan at age eight and you’re a fan at age 60—everybody was out there. That’s part of the reason we get behind college sports in general. It brings such a large and different demographic for us” (Agency: Team Epic, Norwalk, CT).

To promote the alumni discount it offers in partnership with more than 375 schools, GEICO activated the Player’s Academy at 13 universities. The interactive tour challenged fans to earn a 4.0 GPA by completing four engagements that tested mental and physical skills.

Upon entering the GEICO footprint, fans traded their contact information for RFID bands then proceeded to the first challenge where they created an animated GIF to take home as a souvenir. At the next station, a short quiz tested fans’ knowledge of the featured university’s football program while providing information on GEICO’s insurance offerings. At the third station, fans played a quarterback toss game. The final and most popular challenge featured AT&T’s It Can Wait texting and driving virtual reality experience.

A branded retro bike equipped with a Nitro (cold-brewed coffee) cart also made its way around select university campuses during the tour, ultimately dishing out more than 5,200 cups of coffee.

“We think it’s important to get out there and mingle with people and have that face-to-face communication,” says Deedre Daniel, marketing director at GEICO. “But we wanted to do it in a fun way, and we also wanted to provide a public service where we were helping people understand the dangers of texting and driving” (Agency: Inspira Marketing, Norwalk, CT). 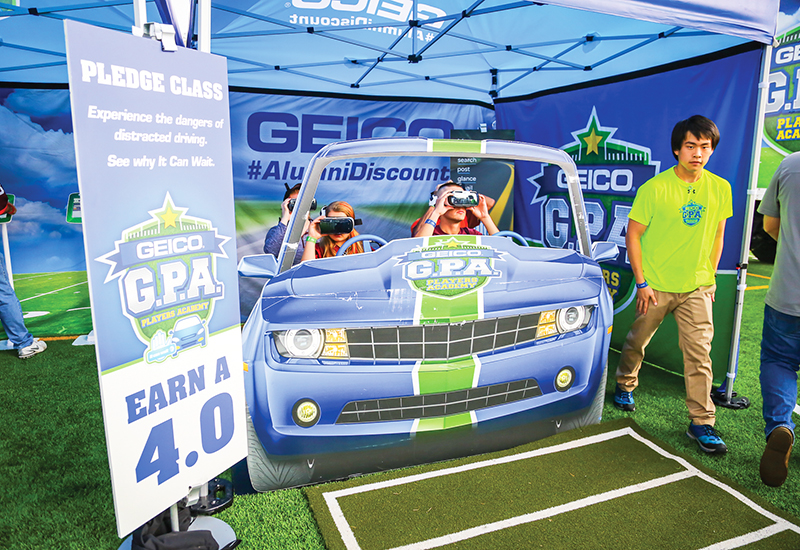 The ‘It Can Wait’ virtual reality experience warned consumers of the dangers of texting and driving at tailgating events activated by both AT&T and GEICO. 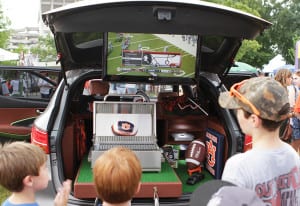 The brand reignited its tailgate tour to show consumers that although Hyundai is an imported brand, it is also “engrained in the fabric of America.” Hyundai activated its #ThisIsLoyalty campaign at 117 college football games over the season, including elaborate consumer experiences at 17 featured games. Activations took place in the Hyundai Fieldhouse, a 2,400-square-foot pregame lounge featuring large screen TVs, autograph sessions, insights from product specialists and plenty of eats.

The Fieldhouse also gave consumers the opportunity to check out the Hyundai Tucson and the Santa Fe, which featured a grill in the back to amplify the tailgating theme. Fans could participate in games like the quarterback toss to win cobranded school gear.

At nine featured games, Hyundai partnered with digital food and travel network Tastemade, which shot episodes of “The Grill Iron” on-site. At each game, the show’s host, Jax Tranchida, teamed up with a notable local chef to cook up tailgate-inspired fare.