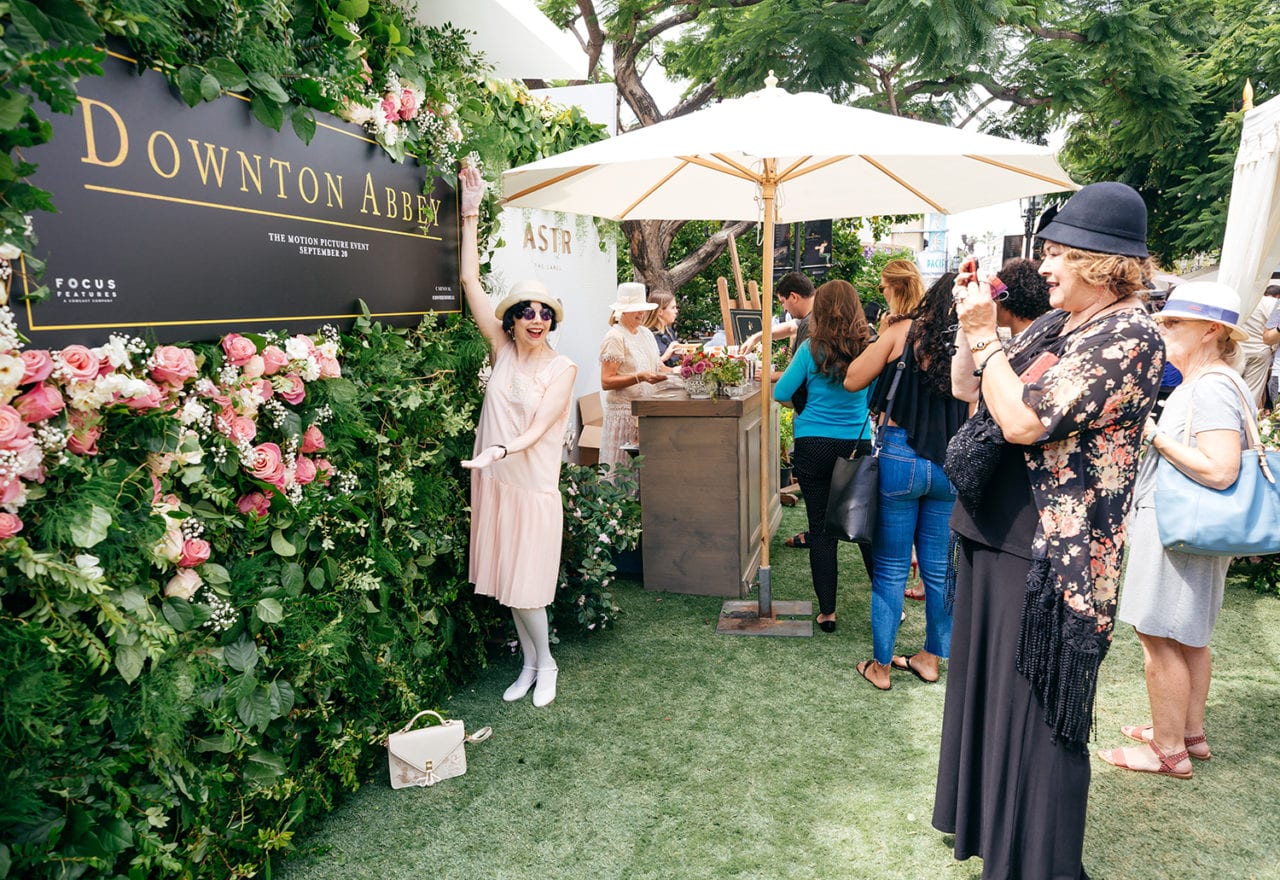 “You’re from Los Angeleez? What on earrrth are you doing here in Brighton? You must be wealthy! Are you married?”

Guests could make their own loose leaf tea mixture from a choice of five flavors.

That was “Nigel” making small talk with one of the guests at Grand High Tea Experience, Sept. 15 in L.A. He was one of about a dozen costumed actors—half in Edwardian finery and half in period-appropriate servants’ dress—roaming the compact footprint at The Grove shopping complex, helping to treat fans to a “Downton Abbey”-inspired garden party experience. The one-day event was timed to build excitement for the release, just five days hence, of Focus Features’ “Downton Abbey” motion picture.

The actors weren’t meant to represent actual “Downton” characters—although one of them was a dead ringer for Maggie Smith (that’s Violet, Dowager Countess of Grantham for you Abbey Heads)—but they each had their own backstories and spoke with spot-on posh accents. Two of them, “Cornelia” and “Gwendolyn,” even stopped to introduce themselves to me, advising that although they called one another Cornie and Gwenny, I was to use their full names when speaking to them.

The summer garden party was hosted by Amazon’s Treasure Truck, a daily-deal mobile pop-up service for users, but the brand took a soft approach to activation: Staff, also in costume, invited guests to play quoits on a small lawn in front of the vehicle. The company did take an impressive step to connect the concept to the “Downton” era, displaying a 1923 Ford Model T that had been refurbished and reskinned as a mini Treasure Truck, suggesting what an Amazon promotional vehicle might have looked like in the 1920s—y’know, had internet shopping existed back then. Amazon reps even invited fans to sit in the Model T’s front seat to pose for photos. And as part of the Amazon activation, ambassadors dressed as paperboys and -girls held for-display-only newspapers advertising the event. (Banner headline: “Amazon Treasure Truck at The Grove! Today Only!”) 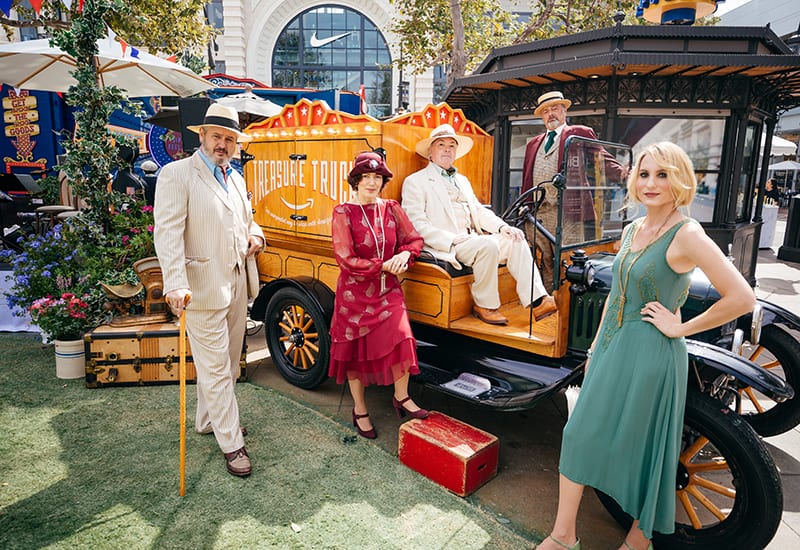 A 1923 Ford Model T was transformed into the Amazon Treasure Truck for the Grand High Tea Experience.

Guests entering the footprint were greeted by the refined strains of a string quartet, with the musicians also outfitted in ’20s-era apparel, and by an abundance of floral bouquets and shabby-chic picnic seating. The event’s centerpiece was a large tent covering a buffet of pastries, tea sandwiches and Republic of Tea iced tea dispensers with a range of flavors on tap.

Republic of Tea also provided a table where guests could make their own loose leaf tea mixture from a choice of five flavors. (I went for lemon chamomile with a touch of natural hibiscus.) Guests scooped the tea into a small tin; one of the two brand ambassadors sealed the container with a “Downton”-branded label and handed each visitor a Republic of Tea teaspoon and a pack of tea sachets. The brand also displayed the Downton Abbey-inspired teas it’s currently selling, with packaging highlighting characters from the show and Downton’s signature design elements.

To either side of the event were miniature croquet courses, with the Edwardian characters providing the guests with basic instructions—some of which were probably not totally in line with official croquet regulations. (Gwenny to one guest: “If you hit the post, that’s two more shots for you, and if you hit me, that’s also two shots.”) 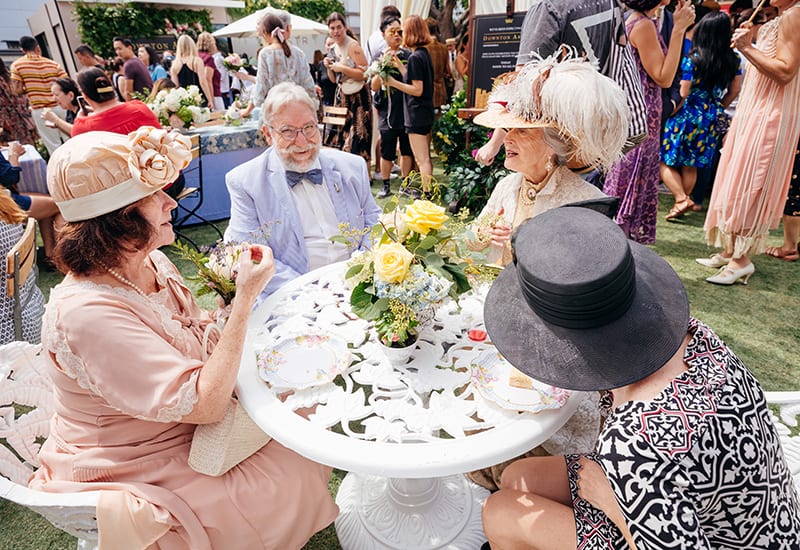 At the rear end of the footprint, a Torrance, CA, floral shop, Flower Duet, handed out made-to-order 10-stem bouquets or offered guests quick instructions on how to make the bouquets themselves. Placards on their stand explained the significance of each of the five types of flowers in the bouquets—example: alstroemeria signifies wealth, prosperity, fortune and friendship, which seemed pretty “Downton”-appropriate. One of the shop’s proprietors explained to me that she chose specific blooms for the event in part because they complemented the color palette of some of the series’ interiors and in part because they would have been available to the characters during a 1920s British summer, a nifty touch of realism.

In front of the flower stand, a calligrapher wrote out name cards that were attached to ribbons each guest could tie around their bouquet, and at two separate tables nearby, artists created tasteful hand-cut paper silhouettes of anyone who cared to sit and pose for them. I spoke with two women who attended together — die-hard fans of the series, both dressed in hats and dresses suitable for grand high tea — who told me that they weren’t quite sure what to expect when they heard about the event, and both agreed the experience was a smashing success.

Have a Seat at the “Downton Abbey” Grand High Tea Experience: