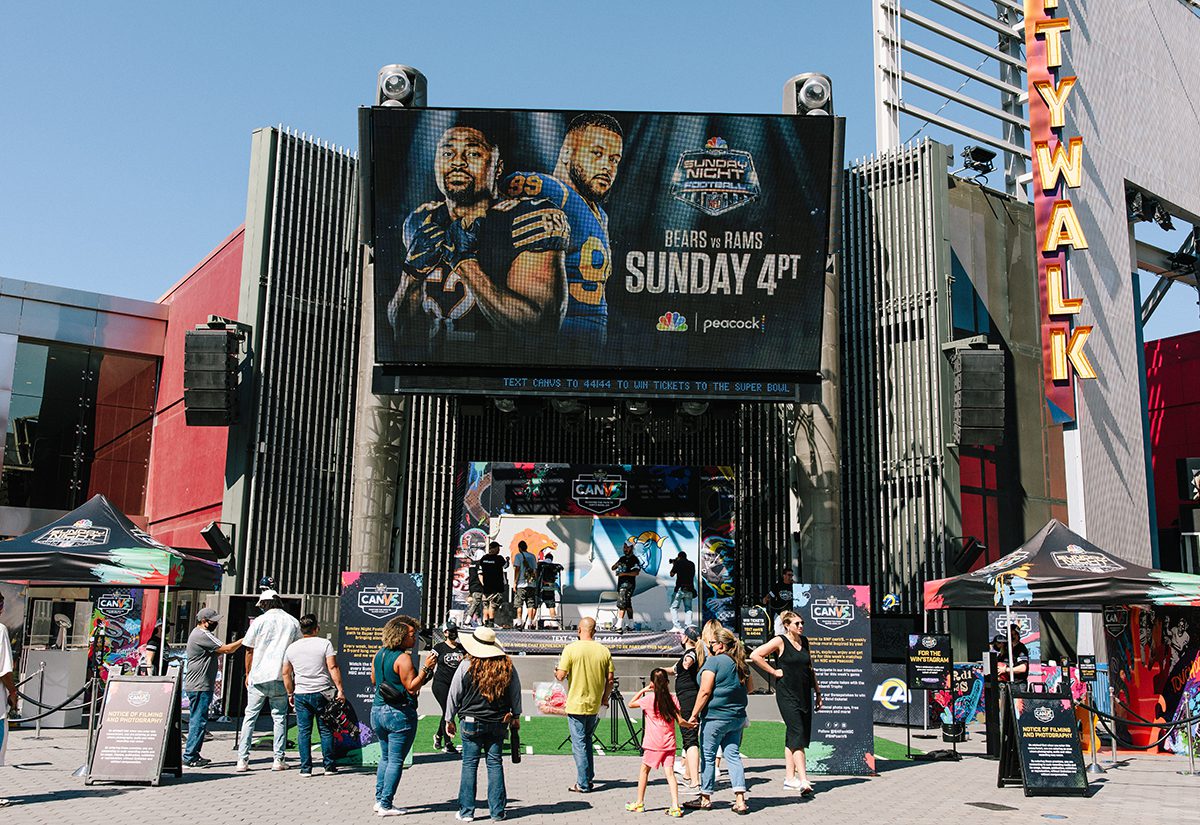 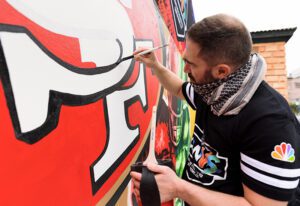 Above, one of 20 artists selected by NBC live-paints a mural depicting the matchup between the 49ers and the Colts.

A disrupted 2020 NFL season left many fans feeling deflated, so to reignite their energy and drive viewership for “Sunday Night Football,” NBC is activating live painting events powered by local artists in six markets. Dubbed canVS, the season-long campaign will culminate in a 100-yard-long mural inspired by fan contributions that will be revealed at Super Bowl LVI in Los Angeles.

For each Sunday Night Football matchup this season, a local artist (or collective of artists) in the host city will create a five-yard-long mural. The artwork is developed with the input of fans, who are encouraged to submit a word or phrase on a microsite that best represents one of the teams playing in that week’s game, like a favorite local food, landmark or player nickname. The phrases are aggregated in a word cloud, and some of their key words are visually incorporated into the mural. Former NFL tight end and accomplished artist Vernon Davis serves as the host of the program, announcing which hashtags fans need to use to submit their ideas each week across his social channels.

In six key markets, NBC is hosting live events that allow fans to watch the featured artist develop their mural in real time (the other 13 “Sunday Night Football” games will be streamed from the local artist’s studio). Artists have around six hours to complete their paintings. As they work, they’re able to intermittently check an adjacent screen to see what words and phrases are populating in the word cloud, and draw design inspiration from them.

“It’s just a unique way for us to think differently about how we can get people to watch the game,” says Kristin Hurst, director-consumer engagement at NBC Sports Group. “We still had that local tie-in to the home market of the Sunday Night Football games, but we had that national scale because everybody has their team and everybody was able to contribute to the art.”

To further immerse attendees in each artist’s breadth of work—and collect valuable fan data—NBC is offering a text-in option only available on-site. By texting canVS to a shortcode, attendees are taken to the microsite where they can dive deeper into the painters’ work. The diverse selection of canVS artists were chosen based on their ties to the local market and desire to bring the community together.

Although the live painting experience is the main focal point of each event, fans can also enter to win two tickets to the Super Bowl and engage in myriad photo moments. One photo op offers a recreation of the typical post-game coach cooler dump with an artistic pink twist, while another offers attendees a chance to get up close and personal with the official Vince Lombardi Trophy.

When the Super Bowl arrives in February, NFL fans will have a chance to view a 100-yard-long combined mural documenting the season—a visual representation of how they helped paint the path to the big game. NBC and the NFL are still in talks about what the culminating celebration could look like, but showcasing a football field-sized painting seems like a good start.

“It was really important for us to be in from the ground and engage with fans in that way, just to remind them, hey, we have a lot of fun stuff happening, fun engagements taking place so make sure that you can engage with us and feel that energy again,” says Hurst. “It was a really great way for us to bring that sense of togetherness, that sense of community and have people experience and participate in things again.” Agency: X-FCTR, Minneapolis. 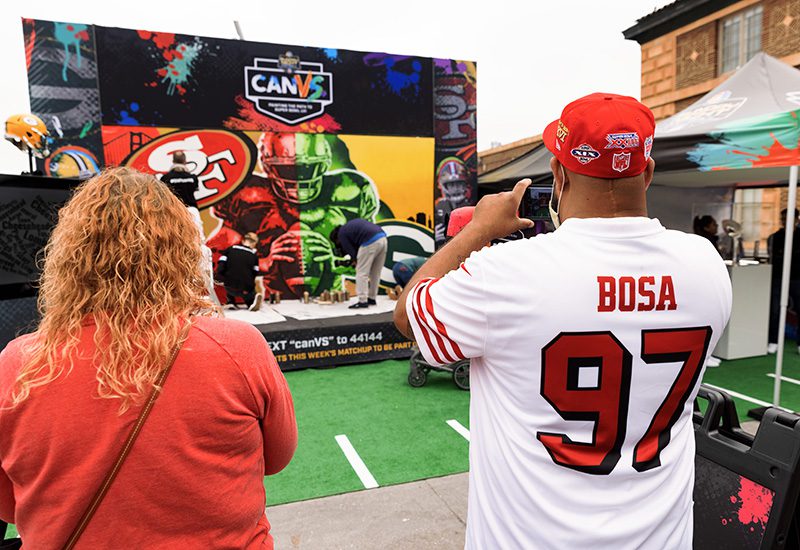 Football fans in six markets will have the opportunity to watch artists create murals in real time.