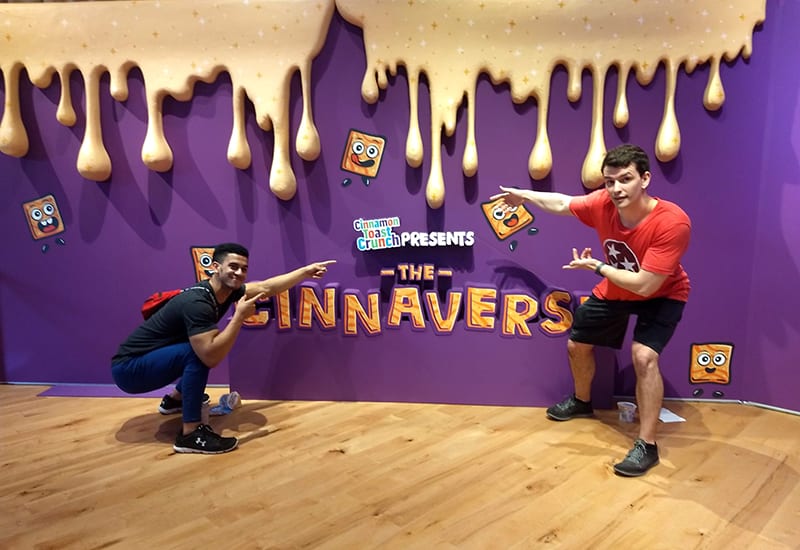 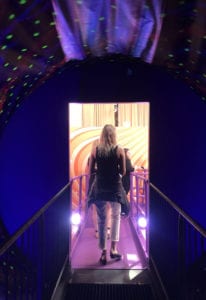 The journey began with a portal to the Cinnaverse.

To spread awareness of the cereal’s new, colorful branding and greater emphasis of its 16 cartoon “Cinnamoji” characters back of box, Cinnamon Toast Crunch created a five-room, interactive pop-up this summer in three cities, Santa Monica, CA, Houston and Chicago, from July 18 to Aug. 25. Dubbed the “Cinnaverse,” the experience traveled to areas where families congregate organically—two malls and a promenade—and featured rooms and photo ops focused on the smell, taste, look, and crunch of the product.

“Cinnamon Toast Crunch is the No. 2 cereal in the U.S., so we always want to make sure that we’re keeping our fans engaged and excited about the brand,” says Taylor Roseberry, brand lead on the program for Cinnamon Toast Crunch. “Over the past couple of years, our strategy has been to bring families fun experiences where they can interact with the brand, and show up where they are in a fun way. This was a continuation of that strategy.”

Two years ago, the brand activated its first experiential pop-up, a giant Cinnamon Toast Crunch box with a drive-thru near the Grand Canyon. The idea was to meet families along their road trips, interact with them—perhaps, breaking up some of the boring moments of traveling—and offer up samples. Last summer, the brand upped the ante with an Airstream trailer pop-up that drove along Route 66, stopping at tourist locations like the St. Louis Arch in Missouri, and the Fourth of July “Red, White and Balloons” event in Albuquerque.

Learn how to profit from the esports industry at the Esports Business Summit. The brands. The media. The tech. The teams. Together in Vegas, Sept. 10-12.

For this year’s program, attendees at registration received a sample of the cereal and were escorted to a portal entryway, a spinning room of light and color, that brought them into the “Cinnaverse.” First up, the “Cinnaswirl Vortex,” which featured scratch and sniff wallpaper, an art installation of a Cinnamoji character that blew out cinnamon mist, and a golden bathtub that attendees could sit in, throw up cinnamon sugar and snap a Boomerang with.

In the “Cinnacrunch Zone,” attendees walked along on a floor that mimicked the sound of crunching a bowl of cereal and were introduced to additional Cinnamoji characters pictured on the walls. Another stop was a Cinnamon Toast Crunch-inspired kitchen, with a mini set of tables and chairs and colorful wallpaper featuring cereal boxes. A “Cinnamilk World” room focused on the cinnamon-flavored cereal milk that’s left after eating a bowl. Attendees could also hop on a “Cinnastick surfboard” and participate in a portal wave installation by activating a Snapchat augmented reality lens that brought the activation’s cinnamon vortex idea to life with swirls and Cinnamoji characters.