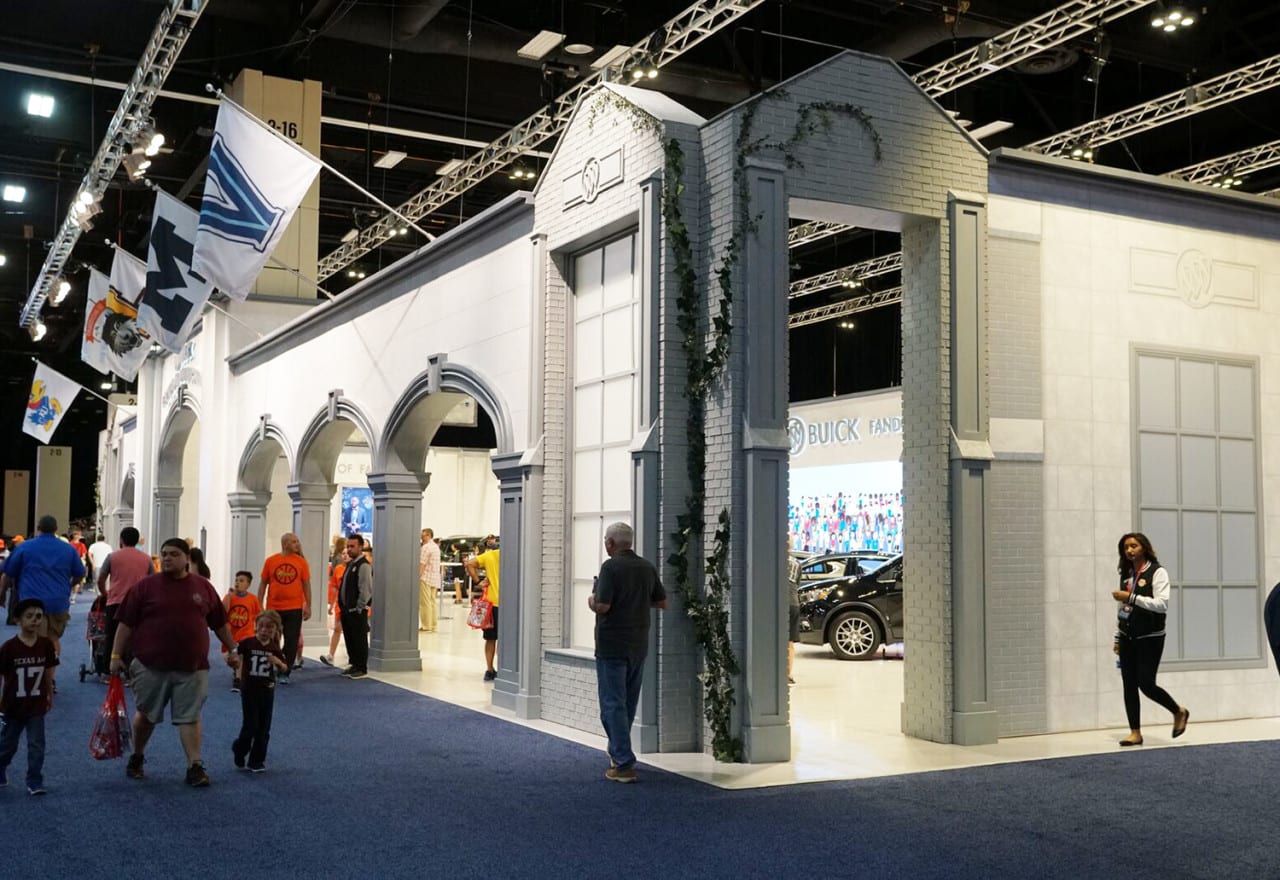 Photo Gallery, B-to-C Events
Posted on May 2, 2018 by Rachel Boucher

To establish a cohesive platform surrounding its sponsorship of the NCAA, Buick for the Final Four Fan Fest this year in San Antonio, TX, March 30 through April 2, reimagined last year’s footprint to create the new Fandom University experience. Buick, positioning itself as a premium, up-market automobile brand, leveraged a 7,500-square-foot activation footprint and a design that felt prestigious and collegiate with faux marble walls, columns and university flags. Adding to the design were faux university crests, faux framed degrees and chalkboards with fan-inspired notes.

“We’ve got this extremely passionate college basketball fan base that we can engage with—they’re educated, they typically have higher household incomes, which leads into that premium luxury automobile space we want to be playing in,” says Anthony Biondo, Buick media and promotions. “The NBA is awesome, but we can play into these passion points around college grads who are often more passionate about their teams than the other fan bases.”

Buick Fandom University was all about recruiting and “graduating” fans. It began with a registration process where consumers entered their information and email to receive a contextually relevant email following the event that talked about their visit to Fandom U and drove them into the purchase funnel with the ability to click through to Buick.com and shop vehicles that they experienced on-site. They could also simply go through the different classroom activations within the footprint, all of which ultimately led them to graduate with a degree in Fandom from Fandom U. Serving as the Dean of students was actor Lamorne Morris of Fox’s “New Girl,” whose image was featured throughout in classroom signage.

Among the interactive classes to help fans “improve their skills” was Advanced Fight Song Techniques, an activation that mirrored James Corden’s “Carpool Karaoke.” Fans sat in a Buick vehicle and chose their final four fight song using an iPad, and then sang along with the song. The footage was captured so fans could share their clip on social media (EM-1, handled). Next up: T-shirt Cannon Mastery, where consumers could take their best shot at hitting the nosebleeds using real t-shirt cannons against an interactive 50-foot LED wall featuring a virtual audience (24G, Intersport, handled). They earned points in the process.

At Tailgate Theory and Design, fans learned how to maximize all facets of the Buick vehicle to ensure they had the tailgate supplies they needed for game day, an experience that helped demonstrate Buick’s hands-free lift gate feature. For Applied Fandom Arts, fans were able to carry their team colors by decorating their own foam spirit finger. And finally, there was Advanced Court Strategy—three teams of three competed to score points on their baskets while protecting their own basket in just three minutes.

Buick designed the footprint to be scalable, with assets that can be used for mobile programs and smaller fan activations at NCAA events across the country. The mobile setup includes a 20-foot by 40-foot trailer containing the scaled down Fandom U experience with key elements like the carpool karaoke and foam finger decorating activity. “Now, we have this platform that works across everything, and it looks and feels like Buick, and we’re telling the same story across all the collegiate championships that we activate at,” Biondo says.

On top of its activation footprint at the NCAA Final Four Fan Fest, Buick also brought back its Grab-A-Buick program, where fans could catch free rides in Buicks throughout San Antonio, saving them money on cab fares and giving them road time in a Buick. Agency: Jack Morton Worldwide, Detroit.