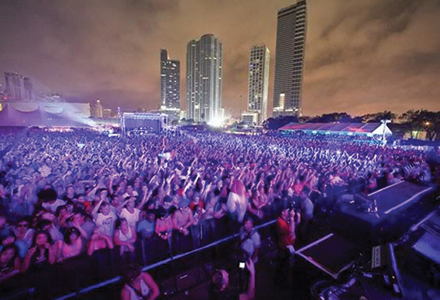 The music industry changes rapidly. And in the late 1990s, electronic dance music, or EDM, gave birth to raves and gave djs a chance to get out from behind the scenes and launch their own careers. The EDM movement lost some momentum during the early 2000s, but in the past few years has again been beating the drum of success.

Major brands have begun taking notice, too. And not just small underground labels, either. Fortune 500 companies are now looking at this space and trying to figure out the most effective way to market to the EDM generation, including Hyundai, which last October funded the Re:generation project, a documentary about electronic music that included top djs like Skrillex and Crystal Method. Here’s a closer look at his burgeoning platform, and the brands riding its coattails.

Artist endorsements aren’t new to the music industry, but they are gaining momentum in this space thanks to brands like Monster Energy and Sol Republic Headphones, which sponsor dj Calculus and dj Tom Thump, respectively, among others. Armani Exchange recently got in on the trend, holding in-store consumer facing events and releasing exclusive music through its apparel stores.

Proprietary events are popular, too. The Red Bull Music Academy is a global series of music workshops and festivals featuring two groups of 30 EDM artists, which will visit New York City this summer for two weeks of recording sessions, lectures by music legends and late night jams, all designed to pair Red Bull with some of the hottest rising stars in EDM before they get huge.

One of the earliest believers in the potential power of EDM as a brand activation platform was Heineken USA, which is a long-time sponsor of the Ultra Music Festival, one of the largest EDM festivals in the world. The brand first got involved in the space in the 1990s and today sponsors Tiesto, arguably the world’s biggest dj and certainly one of the most recognized. According to Pattie Falch, brand director-sponsorships and activation at Heineken, “Our consumers are really passionate about music and EDM allows Heineken to engage with them at their passion points.”

Zev Norotsky, executive publisher of a new EDM publication called elektro magazine, which featured Tiesto on its inaugural cover, calls djs the “new rock stars” because they create the tracks that pop stars get famous for singing and consumers are starting to recognize that. The EDM consumer, he says, is 18 to 25 years old and well-off (or dedicated) enough to pay the high ticket prices, which can run around $250 per event. “It’s a valuable, trendy consumer base that is willing to put their pocketbooks behind their passions,” he says.

Heineken got involved in EDM in Europe, where electro has remained popular even while it languished in the United States. Heineken in Holland, the brand’s home turf, got involved with Tiesto (he’s Dutch) right at the beginning of his career, and stayed with him through his rise. “As he got bigger, we were able to work with him,” Falch says. “We’ve had our pulse on EDM since before anyone else, partially because we’re a global brand and because our consumers are so interested in discovering new music. These partnerships give us the opportunity to give our consumers a unique and enhanced experience with the music and the djs.

The Ultra Music Festival is also one of Heineken’s biggest activations in the space. This year, the festival changed its venue to account for the incredible growth of the scene, and to match, Heineken revamped its traditional experience, too. The festival took over (and closed) Miami’s Biscayne Avenue for the weekend, so the brand set out to give attendees who were spending all weekend on their feet, dancing till dawn and walking around from stage to stage to catch as many of the djs as possible a VIP-style break. To do that, the brand scrapped its old, domed indoor stage set from previous years, and built a branded two-story structure, equipped with a Heineken bar, couches, other comfy seating and screens where attendees could watch some of the performances. A photo activation put images of consumers up on an outdoor LED screen for all to see how much fun was going on inside the branded space, and a video capture experience let guests dance to some hot tunes “inside” Heineken’s new EDM logo, which looks like a graphic equalizer.

“Since Ultra was in a new location, we saw an opportunity to look for a new way to go with our activation,” Falch says. “There’s just so much amazing music at Ultra and we wanted to give consumers more than just the music. We wanted to give them an amazing experience as well.”

She says the whole scene is a natural for Heineken because it’s all about fans discovering new talent, and that’s what the brand really wants to support. “There’s something about being part of that culture that helps the consumers feel that we’re a brand that’s in the know and is helping them have that experience, too.”

Now that’s music to our ears.