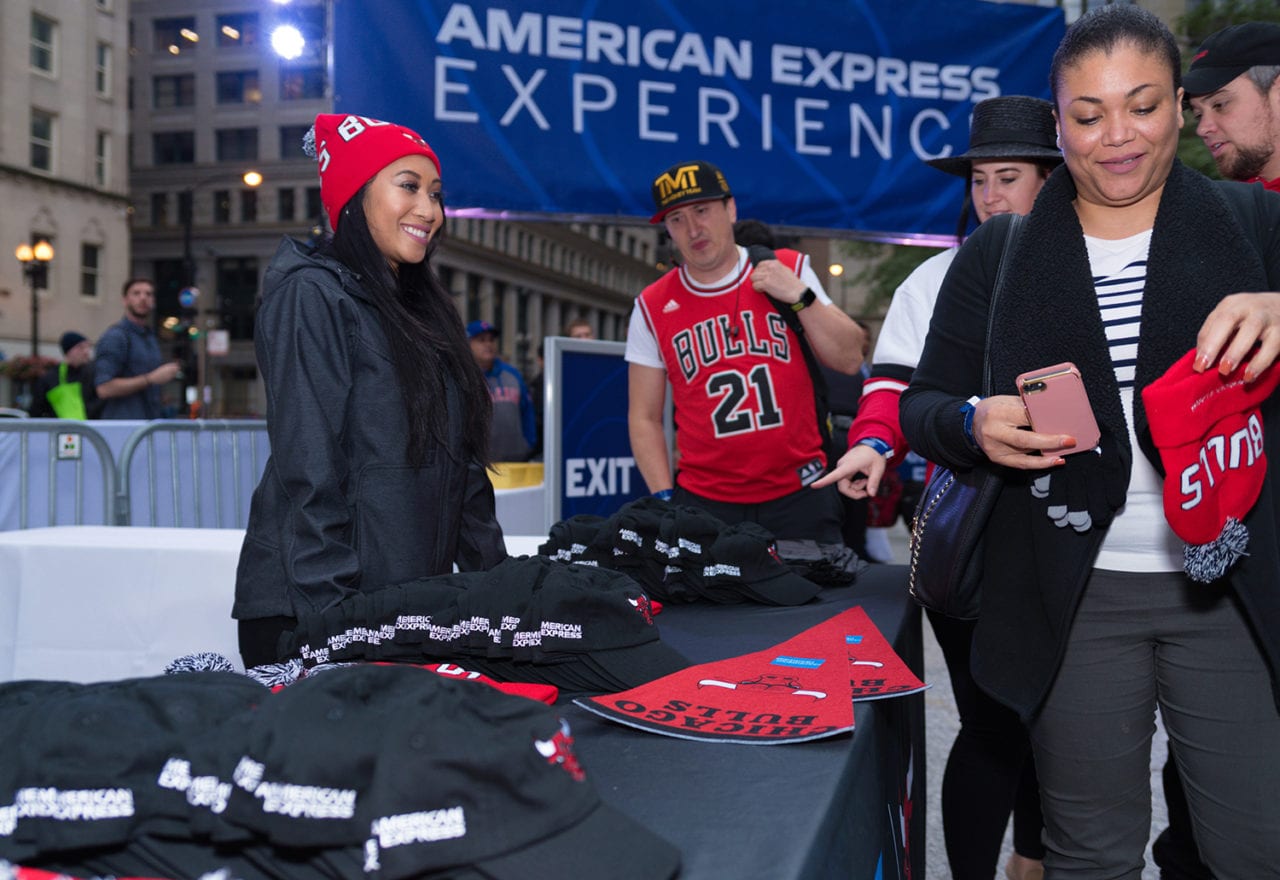 With the start of the 2018-2019 NBA season on the horizon, American Express on Oct. 2 kicked off the ninth year of its partnership with the Chicago Bulls with an outdoor fan activation at Chi-Town’s Daley Plaza. The event, accessible to both cardmembers and non-cardmember hoops fans alike, offered attendees once-in-a-lifetime photo ops, music, player appearances and giveaways while continuing its efforts to support local businesses.

Delivering on its “commitment to backing customers in life and business,” American Express teamed up with Chicago’s own Garrett Popcorn Shops for the activation. The local brand provided fans with complimentary popcorn throughout the event, while bites from area food truck businesses including Fat Shallot and Beaver Donuts were available for purchase.

“We know that a lot of fans look at their teams as a way to connect with the local community,” says Lisa Kahn, director-global partnership strategy, teams & venues, at American Express. “So we partnered with Garrett’s popcorn—they’re an iconic brand in Chicago… It was a way to give back what [fans] want.”

Of course, American Express is known for its cardmember perks, so to reward customers at the event, the brand provided them with exclusive benefits. Among the offerings: 50 percent off food truck fare, exclusive Garrett Popcorn Shops recipes and discounts at its downtown Chicago locations, and access to a priority lane for all Bulls photo ops and meet-and-greets. The perk that packed the most punch, however, was the chance to try on all six Chicago Bulls championship rings.

Non-cardmembers were also treated to fan experiences, like the chance to meet Bulls legends Horace Grant and Toni Kukoc, and mingle with the team mascot, Benny the Bull. There were also lawn games, music, influencers and branded giveaways, but the biggest draw was the rare opportunity to take a photo with an NBA Championship Trophy.

According to Amex, which has partnerships with four other NBA teams, consumers will see more of this event format in the future, where the brand offers cardmembers advantages and access, then opens some experiences up to non-cardmember fans.

“We want this experience to be open to all so it allows [non-cardmembers] to really sample what membership is like,” says Kahn. “But knowing that a large percentage of attendees will be cardmembers, we also want to make sure that their experience is elevated and there is something exclusive for them as well.” Agency: Momentum Worldwide, New York City.

See How Amex Engaged Bulls Fans Off of the Court: