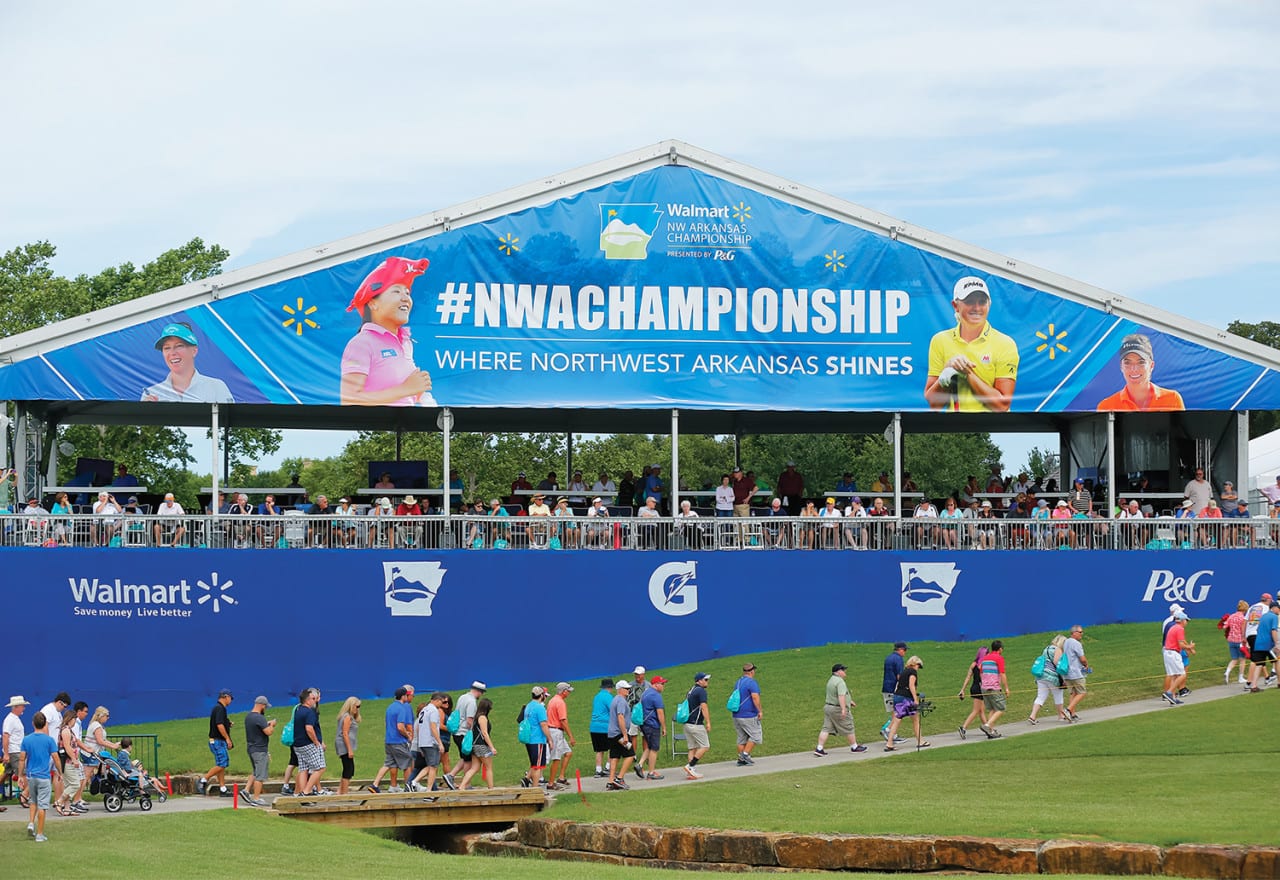 How Walmart Carved out a Community-Driven Niche in Championship Golf

Mention Walmart, and the affluence of golf doesn’t immediately spring to mind. The brand connotes everyday low prices on groceries and other necessities, not rounds of golf and its accoutrements. So we traveled to Rogers, AR, to look into the seeming incongruence as it plays out at the Walmart NW Arkansas Championship Presented by P&G, an event on the LPGA tour now in its 11th year that took place June 19-25 at the posh Pinnacle Country Club.

There we found a world-class championship that attracts top female golfers competing for a $2 million purse and, in keeping with a trend among sports properties today, an event that extends beyond the course to encompass the surrounding community with activities for golf fans and non-golfers alike. Besides the on-course action, the tournament has slowly grown to now include a two-day culinary event, an executive women’s networking opportunity, kids’ activities, a 5K run, a Saturday evening concert by singer Elle King and more. Many are either free or low-cost and designed to include families and kids from all backgrounds.

Outside of shareholder week, this stop on the LPGA tour is Walmart’s biggest activation in Northwest Arkansas and a chance to satisfy a core tenet of the Walmart brand—to give back to the communities where it operates its mega stores. This year, that means a $3 million donation to local causes. In that sense, the tournament also puts a kind face on the retailing behemoth, one that has taken its knocks for pushing smaller mom and pop stores out of business and putting the squeeze on its suppliers. 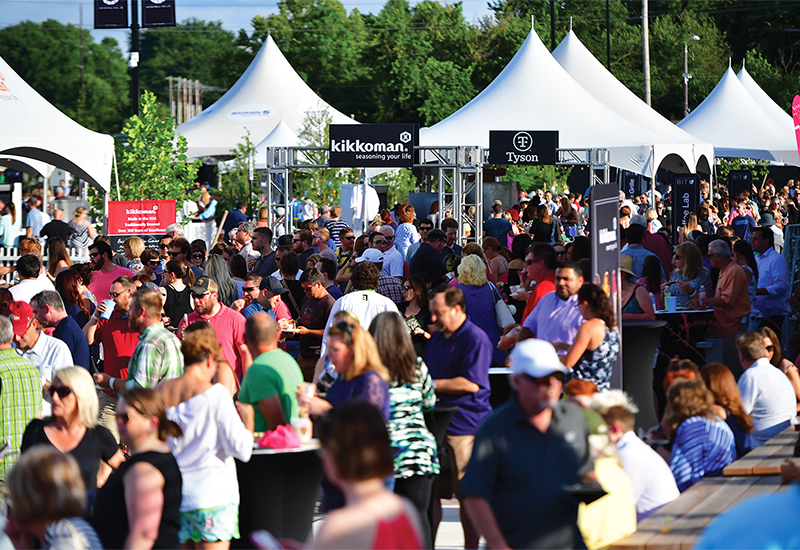 At the NW Arkansas Championship, none of the food in the concession stands costs more than $3.

“I would be lying if I didn’t say that that is a challenge when you are the biggest. We definitely get a lot thrown at us,” says Mark Henneberger, vp-shows and events at Walmart. “But we are very proud of who we are and what we stand for, saving people money so they can live better. It is an advertising slogan, but it is actually what we do, and we are very proud of it, and proud of this event.”

To see for ourselves, we hopped in a golf cart with tournament director Harry Hardy, who with a staff of eight full-timers, has overseen the championship for the past five years (Octagon, Norwalk, CT, handles). We discovered an event that integrates its more than 50 sponsors at various levels into an experience that is affordable, accessible and fun, and a whole lot more.

On-course activations are plentiful and integrated into the experience in a way that accommodates attendees and makes sense for the brands. Kimberly-Clark’s sponsorship dollars provide free shaded spectator areas at four of the holes—1, 9, 17 and 18. Proceeds from the Coors Light Beer Garden, staffed by the mayor of Rogers and his team, go toward the group’s annual holiday party. Hallmark supplies cards and books in a spot called Autograph Alley where kids can hang out and snag player signatures, another smart product integration. General Mills, a partner since the tournament’s inception, puts the players’ images on Wheaties boxes every year, and displays them on signs along a “walk of champions.” Banana Boat sponsors the putting green and improves the spectator experience by handing out samples of sunscreen. Straight Talk, a major seller of pre-paid mobile phones into Walmart, provides charging stations; 3M, the air filters for the air conditioning units on-site. Presenting sponsor P&G distributes gift bags, each with a value of $100, filled with Febreze, Pantene, a Gillette razor and other products in its portfolio of brands.

Then there are the Tyson cafes spread throughout the course, which literally flip the typical event concession model—where $12 burgers and $10 beers are, pardon the pun, par for the course—on its head. Here, Tyson chefs offer a menu where nothing costs more than $3. So, with ticket sales at $10 (kids get in free with a ticketed adult), a family of four can attend the event for less than $50, including food and drink. Volunteers from local non-profits staff each café and reap the benefits from the proceeds of the sales. 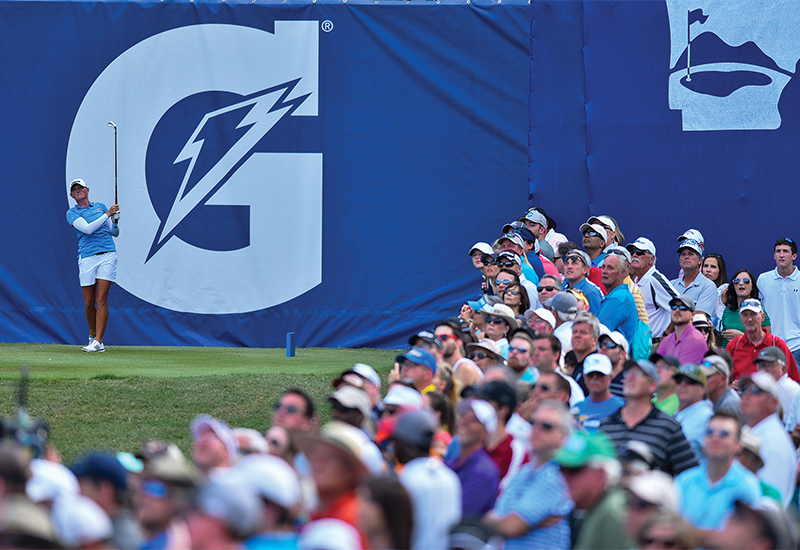 The Hub479 structure, also known as the Gatorade Loudest Hole, is a fan hangout with games, a cocktail bar and more.

“We want, as Walmart does, to make food accessible to everyone and raise the expectations of the good that food can do for communities, so participating in this is critically important for us,” says Wendyjean Bennett, key account manager at Tyson Foods, a sponsor of the championship since its inception.

While the sponsorships enhance the fan experience, the tournament’s temporary structures, which are built over a six-week period, are deployed in the days before the championship as spots for experiences for local children and community leaders. During our tour, kids painted pictures while a local Job Corps graduate told his story of overcoming life challenges. The day before, two LPGA players presented a motivational summit. And the Sam’s Club Kids Center, which is open to the public on Friday through Sunday, earlier in the week treated kids bussed in from local Boys and Girls Clubs to activities and healthy snacks. “Everything is about giving back to the community,” Henneberger adds. 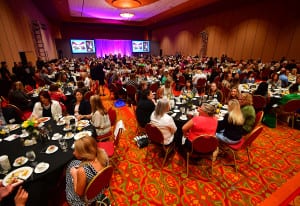 Among events during the tourney—a women’s networking breakfast sponsored by Kimberly-Clark.

A new structure on the course is Hub479, a social destination on the 17th hole, also known as the Gatorade Loudest Hole on Tour, a spot that, contrary to the atmosphere at most golf events, gets pretty raucous and rowdy and, of course, is laden with G branding. Hub479, where the public can gather free of charge to hang out and play games, includes a Tyson café, lounge seating, a cocktail bar and photo booth. On Thursday, it housed P&G’s biggest activation, the Pantene Beautiful Lengths initiative, in which 100 volunteers on stage cut eight inches of their untreated hair that will be made into wigs for cancer sufferers in Northwest Arkansas.

“In another event this would be a VIP structure,” Hardy says. “But here, the sign out front will say ‘Everyone Welcome.’ We want everyone to know that this is their structure, built for them.”

Fans with an extra $75 can purchase an upgraded ticket for a day ($200 for the week) at The Club presented by LG with its sports-bar atmosphere overlooking the 16th green and 17th tee, with tvs on display.

The tournament with its players, sponsorships and live golf action is one thing. But it’s also like a spoke in a wheel surrounded by ancillary events that extend the experience outside the ropes to include the community. Our second day in Rogers began with a Network of Executive Women Northwest Arkansas breakfast sponsored by Kimberly Clark, a networking and educational opportunity for area women (and men) that featured a conversation with Liza Landsman, president of Jet.com. 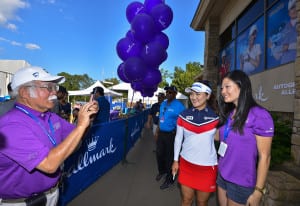 Then there is Bite NW Arkansas, a two-day food festival now in its third year that later that night offered tastings from area restaurants and culinary brands, and a Beer and Burger Fest on the next. So we headed on over to nearby Bentonville’s Eighth Street Market, an 80,000-square-foot food and education space that also is home to Northwest Arkansas Community College’s Brightwater: A Center for the Study of Food. Among the many activations at Bite, Tyson served up samples from its booth and also donated its chicken, beef and pork products to the restaurants to cook and serve. The James Beard Foundation curated cooking demos in a Chef’s Table Experience and a discussion on larger issues such as food waste and sustainability. The demos were live streamed on the foundation’s Facebook Live site.

“I don’t think we can think of a consumer as a vertical anymore—this is a sports consumer, this is a luxury consumer, this is a foodie. Those verticals in my mind don’t exist anymore. Our affiliation with Bite is just the beginning of that evolution. This is a very integrated experience across all of those verticals, and that is the type of consumer we are starting to see. They want it all, and they want it all in one place,” says Kris Moon, vp at the James Beard Foundation.

And that, along with giving back to the community, is just what the Walmart’s golf tournament delivers.

• Photo Tour: A Day at the Walmart NW Arkansas Championship